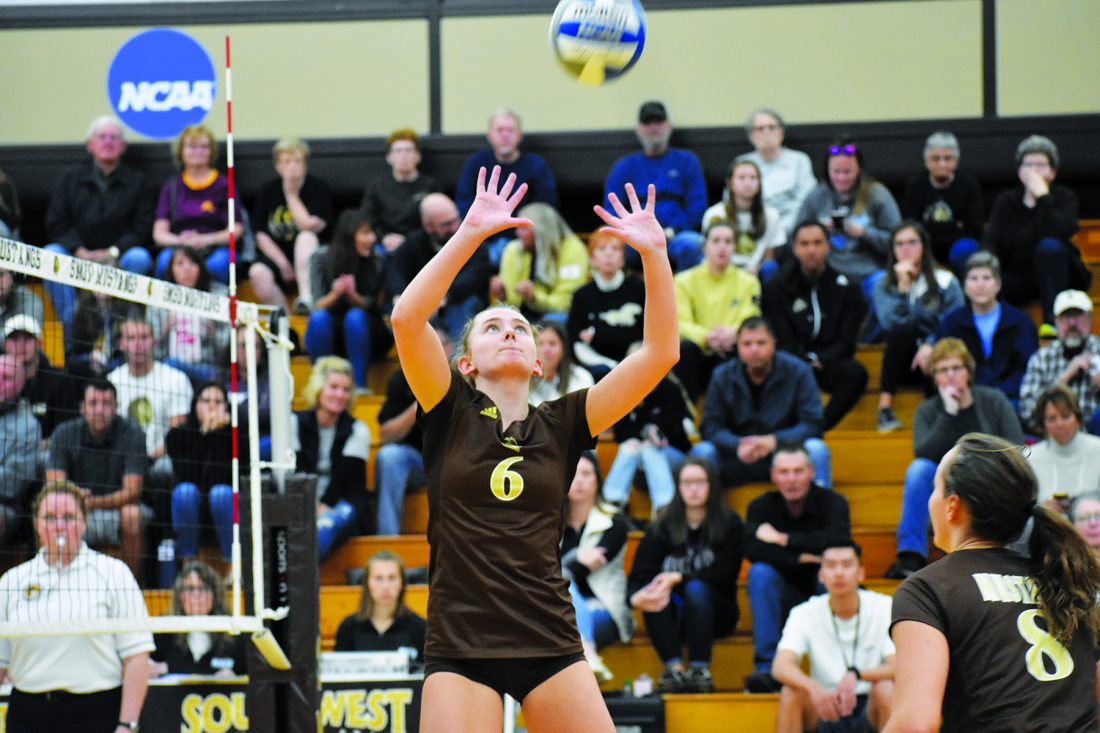 Independent file photo SMSU’s Alisa Bengen sets the ball during their match against MSU Moorhead on Saturday. The Mustangs will face Upper Iowa and Winona State this weekend.

MARSHALL — The No. 8 Southwest Minnesota State volleyball team (10-2, 4-0 NSIC) hosts No. 22 Upper Iowa on Friday in the annual “Red Out” match, sponsored by Avera.

•SMSU will then host Winona State on Saturday at 2 p.m.

•SMSU went 2-0 in the home opener with a thriling five-set victory over, then-ranked, No. 8 Northern State on Friday and a sweep over MSU Moorhead on Saturday.

•SMSU moves to No. 8 in the latest AVCA poll released on Monday. This marks the 179th poll that SMSU has been featured in the Top-25.

•SMSU is one of two teams remaining in the NSIC that is undefeated in conference play. The other team at a 4-0 mark in the NSIC is No. 3 Minnesota Duluth.

•The game can be seen on the NSIC Network, on the Division II, NSIC, Concordia-St. Paul and Southwest Minnesota State Facebook pages (pending your approval), on the DII Twitter page at @NCAADII and through the Periscope app at @NCAADII.

•The game will also be available in Concordia’s video portal. The game will be produced by the NCAA’s production partner, Niles Media Group.

•Junior Angela Young leads the team offensively with 179 kills and a 3.98 kills per set average.

•Emma Thomssen leads in assists with 283 and Alisa Bengen is right behind with 274.

•Payton Hjerleid leads the team defensively with 158 digs and 3.51 digs per set.

•Zoe Lier leads in blocks with 42 including 31 block assist and 11 block solos.

•SMSU remains undefeated in the all-time series with a 25-0 advantage dating back to 2004.

•SMSU has won all matches in the series with the last being a five-set victory in Fayette on Nov. 2, 2018.

•Head coach Aaron Nelson in his ninth season holds a 117-117 overall record and 67-93 record in the conference.

•Anna Winter leads the Peacocks with 190 kills this season and a 4.63 kills per set average.

•Leading the Peacocks defense is Haley Weepie with 195 digs.

•Sarah Johnson leads UIU in service aces with 16 and Carlee Ketchum paces the Peacocks with 426 assists.

•The Peacocks hold a 13.46 kills per set average and a team .281 hitting percentage.

•The Mustangs have won the last three of four matches after going 1-1 last season.

•Madison Larson leads the offensive with 117 kills and 3.16 kills per set.

•Becca Pagel leads the Warrior defense with 191 digs and 4.24 digs per set.

•Madison Rizner leads the Warriors at the net with 52 blocks and 1.16 blocks per set.

•WSU entered NSIC play undefeated before suffering a weekend sweep at the hand of St. Cloud State and Minnesota Duluth with a four-set loss to SCSU and a sweep by UMD.

•Lydia Sussner is fifth in the conference in hittting percentage with a 0.387 mark.