SMSU VOLLEYBALL: No. 8 SMSU earns sweep against No. 22 Upper Iowa 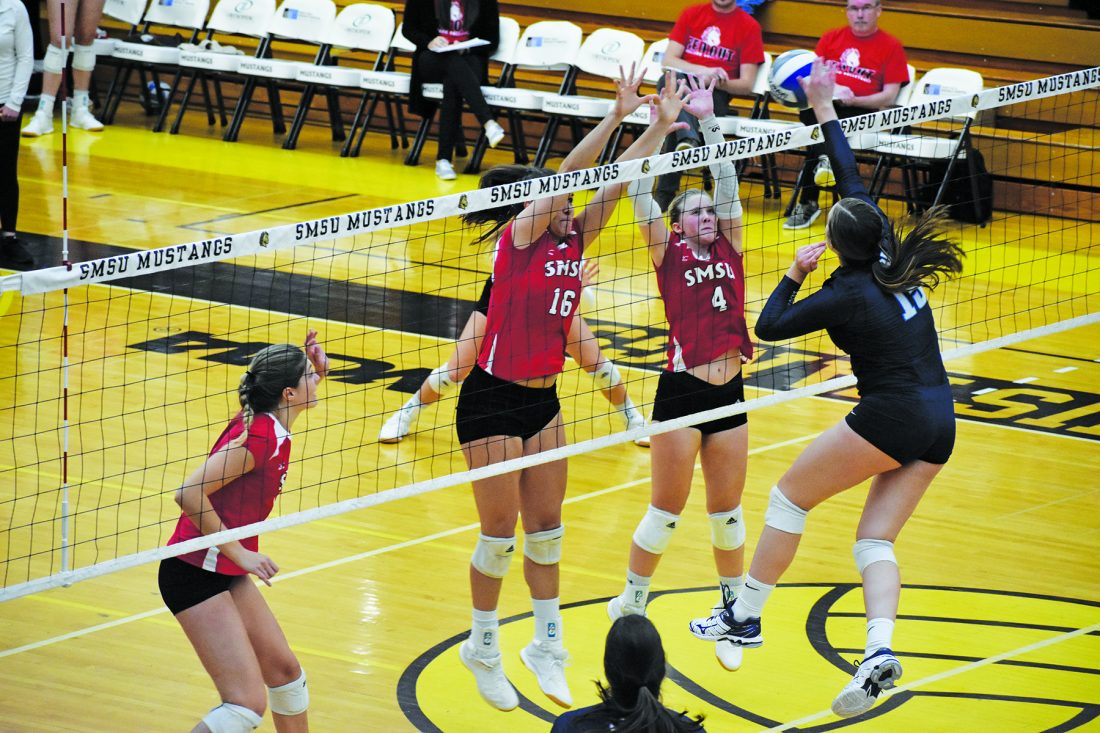 Photo by Sam Thiel SMSU’s Zoe Lier (16) and Rachel Fink (4) go up for a block during their match against Upper Iowa University on Friday. The Mustangs defeated UIU 3-0.

MARSHALL — Another week, another tight battle against a ranked opponent for the Southwest Minnesota State University volleyball team.

After facing then-No. 8 Northern State last Friday, the new No. 8 Mustangs squared off against No. 22 Upper Iowa University looking to keep their perfect start to the conference schedule intact. In a back-and-forth battle, SMSU was able to escape a pair of close sets before taking the third frame in a 3-0 (25-23, 25-23, 25-19) victory over the Peacocks on Friday night in the annual “Red Out” match in the PE Gym.

SMSU coach Terry Culhane said they knew it was going to be a challenging matchup and felt they were able to make enough plays, particularly late in the first couple of sets to come away with a win.

“I think Upper Iowa’s got a good team and we expected the battle we had and fortunately we were able to make a play or two more than they did, especially in games 1 and 2 in the end,” Culhane said. “Volleyball’s such a unique sport in that way where one swing, one block, one good serve or one bad play is sometimes the difference. Our kids have held together pretty well at the end of games; we have a tendency to give up big leads, but I hope we keep getting better at that.”

The tight play that saw 21 ties and six lead changes was evident right from the beginning. Both teams traded points to start the match before a small Upper Iowa run gave the Peacocks a 14-9 lead. SMSU would answer right back, though, drawing to within two on back-to-back Meg Schmidt kills before Zoe Lier and Angela Young teamed up to block an Upper Iowa attack to tie things up at 19 apiece. The two NSIC foes would trade more points down the stretch, but another Schmidt kill would seal the opening set victory for SMSU in a 25-23 decision.

Set 2 was another tight affair to start, as Upper Iowa held a 7-4 lead before a trio of kills from Rachel Fink and Young helped bring SMSU back into the mix. Both sides continued to throw small runs at each other, with neither one giving up a stretch of more than a few points to keep things deadlocked at 15-15 midway through the set.

After the Peacocks gained a slim advantage at 17-15, the Mustangs came roaring back with a Schmidt kill, an UIU error and a pair of service aces from Alisa Bengen to put SMSU back in front at 19-17. Similar to its opening counterpart, the second set saw just as much back-and-forth play down the stretch, and just like the first frame, the Mustangs came out on top 25-23 to take a 2-0 lead in the match.

Despite having the momentum on their side, SMSU knew Upper Iowa wasn’t going to go down without a fight. UIU showed that grit to start the third set, earning a 4-0 advantage, but the Mustangs had a similar resiliency factor and went on a 6-0 answer to take the lead for good.

SMSU would continue to hold a slim advantage over the next few points before a couple of UIU errors and an ace from Emma Thomssen gave the Mustangs a 15-10 lead. The Mustangs then led by at least four the rest of the way en route to a 25-19 third set win and a 3-0 victory.

Schmidt led the way for SMSU with 16 kills while Young added 12. Thomssen led in set assists with 21 while Bengen added 14. Payton Hjerleid led in digs with 16 while Young and Thomssen each added nine.

After earning nine service aces against Northern State a week ago, the Mustangs continued to put their aggressive serving on display against Upper Iowa, recording another nine aces. SMSU had three in the first set, four in the second and two in the third while producing a percentage of nearly 91%.

Culhane said they’ve been working on improving their consistency behind the service line and felt they did a good job of taking care of the ball.

“We’re trying to work on it more and more and just have consistency with not just putting the ball in play but trying to make it offensive as well. I think we’re getting better at that, we served 91% and we don’t always look at the percentage because we just want to be able to serve tough and obviously you have to take care of the ball,” Culhane said. “We had some good string from some kids serving; Emma served tough and I thought Angela had a good string for us. We have six kids serving and we need all six of them to be able to take care of the ball and not give easy opportunities.”

SMSU (11-2 overall, 5-0 NSIC) will wrap up its four-match homestand against Winona State University today at 2 p.m. Culhane said their biggest takeaway will be to continue to play hard and take care of the ball in all aspects of the match against another quality opponent.

“I think we just need to continue to play hard and play smart. In volleyball you need to be able to take care of the ball, whether it’s hitting, serving or digging the ball and I think we just have to try to continue to do that,” Culhane said. “We have another good opponent and that’s just the nature of playing Friday-Saturday, you know that you have to be ready to play and that’s always a challenge as anything is. Hopefully we’re ready to go and play hard.”