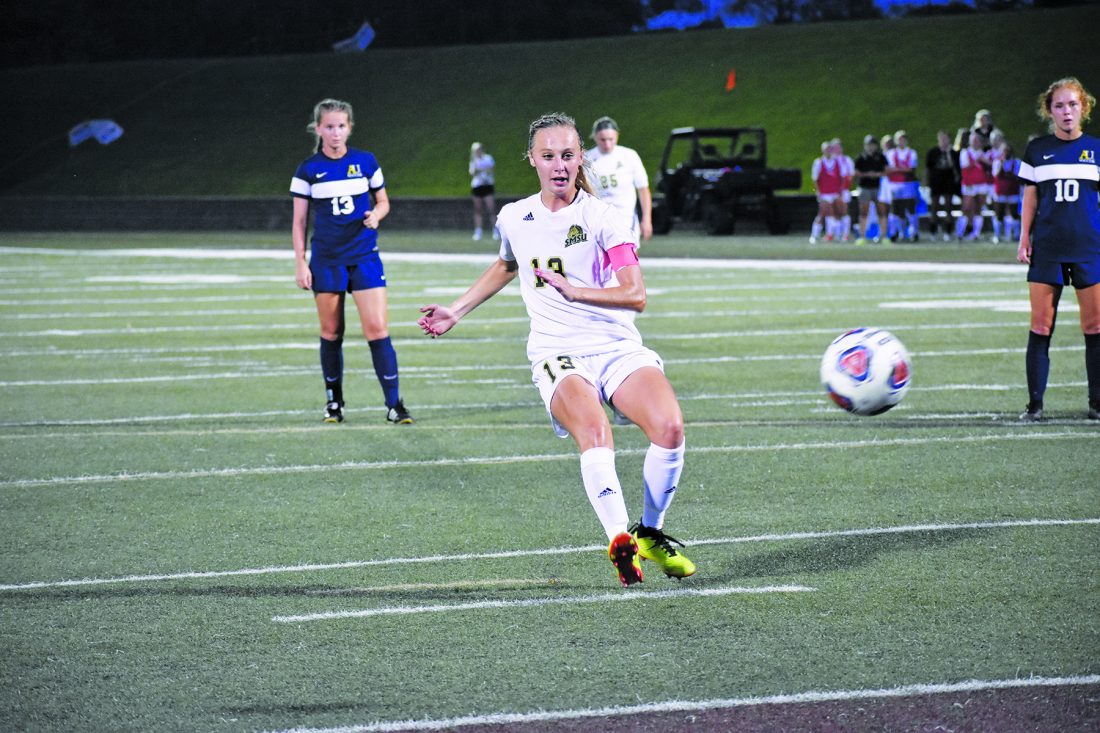 Independent file photo SMSU’s Kelli Wentz kicks the ball during their game against Augustana University on Sept. 20. The Mustangs will face Minnesota Crookston and Bemidji State this weekend.

•The Mustangs went undefeated in a weekend road series with a 1-0 victory over Northern State and a 2-1 victory over MSU Moorhead.

•This is the first time the Mustangs have had three consecutive conference victories since the 2014 season.

•Friday’s victory was the third shutout for the Mustangs this season.

•Erin Fisher leads the team in scoring with three this season, Abbey Hoisington and Alex Lotts each have contributed two.

•Head coach Kyle Halfpop is in his first season at the helm after serving as the assistant coach at Sioux Falls for the past three season.

•Maggie Peterson leads the team in scoring with one goal off eight shots, six of them on goal. Peterson’s goal is the lone goal for the Golden Eagles this season.

•Athena DiMario Done is the sole GK with a 0-5 record with five appearances, 45 saves off 122 shots faced.

•SMSU has lost the past four games with the last a 4-0 final in Bemidji.

•Head coach Jim Stone is the winningest coach in history in his 18 seasons at the helm, with a 123-70-20 record in conference play.

•Sara Wendt leads in goals with three this season off 14 shots, seven of them on goal.

•Melanie Peltier leads in shots with 15, six of them on goal. Peltier has two goals of her own.

•Emma Riedl and Alyssa Stumbaugh are the goalkeepers for the Beavers. Riedl has 15 saves and one goal allowed. Sedlacek has 17 saves and has allowed five goals.

•SMSU’s true freshman Amanda Haimes holds a 5-1 record this season with three shutout victories. Haimes has 20 saves on the season, with a season-high six saves in the 2-1 victory over MSU Moorhead.

•Abbey Hoisington and Alex Lotts both have contributed two goals this season.

•Alli Miskowiec, Olivia Harriger, and Jessica Jugovich each all have one goal.

•Erin Fisher leads the conference in game-winning goals with three, and ranks third in the nation.

•Fisher also ranks fifth in the conference in goals per game.

•Alex Lotts ranks fifth in the conference with assists per game.

•Mustangs are led in scoring by Erin Fisher with three goals on the season. Fisher has six shots total with four on goal.