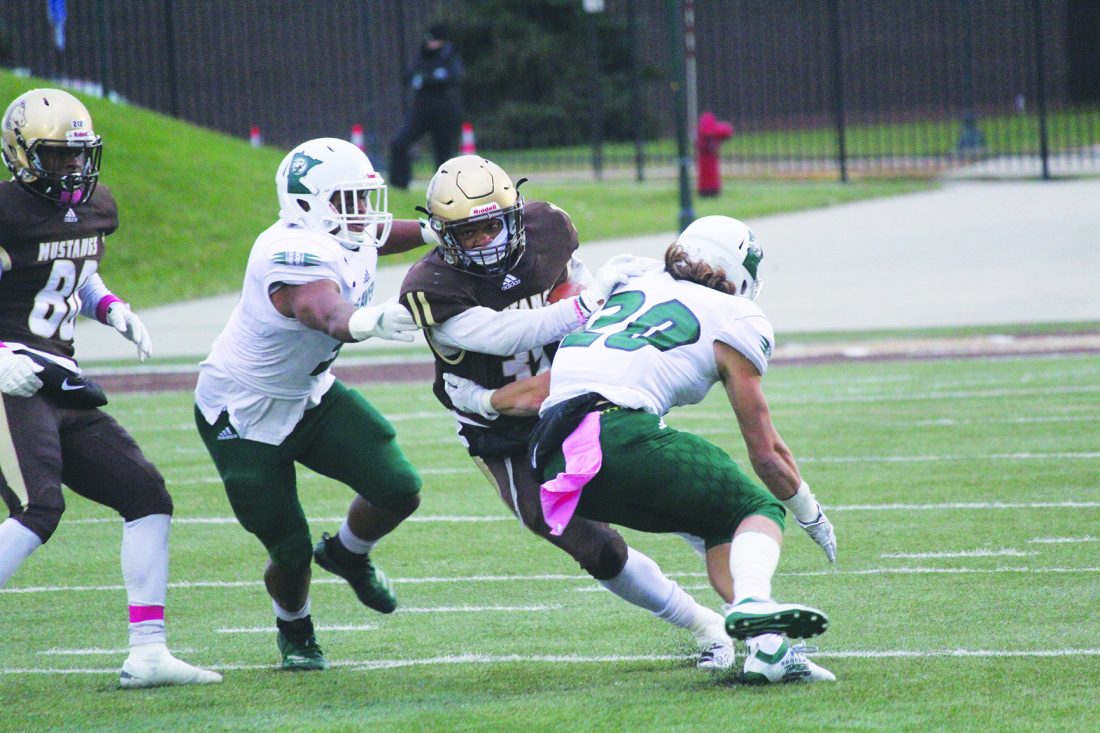 Photo by Jake Przytarski SMSU’s Duce Reynolds carries the ball during their game against Bemidji State University on Saturday.

MARSHALL — It took three quarters of dominant football to build, but only one disastrous quarter to collapse.

The Southwest Minnesota State University football team saw its 24-point advantage evaporate in the fourth quarter of Saturday’s homecoming against Bemidji State University as the Beavers pulled off the improbable by scoring 25 unanswered points to defeat the Mustangs in a 25-24 heartbreaker.

“It was a prime example of how in the game of football you have to play a full game,” said SMSU coach Cory Sauter. “We played three and half quarters of good football and about three quarters of one quarter not so well. Credit to Bemidji they scored one more point than us and I don’t know if we’re mature enough to handle a lead. We have to find ways to close out a team when you’re in that position and we weren’t able to do that here.”

The Mustangs continued their ongoing trend of strong performances in the running game in Saturday’s tough matchup against the Beavers by rushing for 193 yards on 47 carries. Freshman Duce Reynolds led the way with his first 100-yard game of his career with 102 yards on 20 carries. Senior Max Simmons wasn’t far behind with 89 yards on 22 carries.

The 200-yard showing comes a week after the Mustangs gashed Minot State University for 254 yards rushing and 158 yards the week prior against Upper Iowa University. With the emergence of an effective running attack, Sauter says it has benefitted the offense in multiple ways.

“It’s been big for us I mean just in terms of keeping us manageable third downs and minimizing putting our offense in a compromising position in terms of turnovers,” said Sauter. “We’ve been able to throw higher-percentage throws when we do throw it and the kids are running hard and getting some yards after contact, so we definitely have made some nice gains in that area and it was good to see us continue that (Saturday).”

With the Beavers having to respect the threat of the run, the Mustangs were able to test BSU through the air which resulted in a 198-yard passing game by Boyer Bouman. Bouman linked up with wide receiver Daniel Davis twice in the end zone and Simmons once for a three-touchdown day. Davis finished the game with a team-leading 110 yards on six receptions, while Simmons, Luke Narveson and Bailey Olson each caught two passes.

With 10:16 left to play in the game, the Mustangs added what looked to be an exclamation point on a thoroughly dominant performance through three quarters when Skyler Crews drilled a 29-yard field goal to put SMSU ahead 24-0.

Then, the unthinkable happened.

The Beavers responded by putting on a one-minute offensive clinic with a four-play 75-yard scoring drive to get on the board after having been shutout for nearly 50 minutes of play. Unfortunately, BSU did not stop there.

After recovering the ensuing onside kick, the Beavers took approximately three minutes to put together an 11-play, 60-yard scoring drive to make it a two-possession game at 24-13. With the defense needing a rest, the Mustangs counted on their offense to recapture the magic of the previous three quarters but could only muster a three-play, one-yard drive that took only two minutes off the clock and ended in a punt.

As happy as Sauter was to see the offense succeed earlier in the game, he was more disappointed in their inability for it to put the game away with a sustained drive in the fourth quarter.

After the Beavers made it 24-19 following an eight-play, 77-yard drive, the Mustang offense had one more opportunity to stop the bleeding as a first down would effectively seal a victory. It was not to be, however, as the drive went nowhere and SMSU was left with a crucial decision to either punt the ball on fourth down at BSU’s 39-yard line or go for the win and try to convert for a first down. The Mustangs elected to go the latter route and turned the ball over on downs to give the Beavers a chance to win the game with 1:38 left on the clock.

“They had a lot of momentum going at that point in time and we wanted to find a way to win the game,” said Sauter. “The play was open, and everyone was on board with it, our offense was on board with it, defense was on board with it and we wanted to play to win as opposed to playing not to lose and so we went for it. Everything was set up and unfortunately, we missed the throw, but as I told Boyer you don’t critique yourself on one play. He made a lot of big-time plays, scored touchdowns for us with throws and that put us in position to have that lead so don’t beat yourself up on the one throw that you missed. I mean, that’s going to happen in football.”

BSU went on to march 61 yards on eight plays and score the game-winning touchdown on a fourth down passing play from the 27-yard line. Incredibly, the touchdown drive put the Beavers at 273 yards in the final quarter alone after having totaled only 203 in the previous three quarters.

The Mustangs will look to turn the page on the heartbreaking loss with a matchup against St. Cloud State University on the road at 1 p.m. Sauter hopes that the disappointing result will serve as a learning tool for his players.

“It’s obviously a great learning tool to be in a game like this as hard as it is to go through it,” said Sauter. “You’d like to think that your players will learn how every day, every snap, every practice and every lift matters. If you skip something, if you know you’re not giving 100% at some point, it’s going to catch up to you. We had a good week of practice, our best week of work and so there weren’t any glaring issues that way but it’s just at this level everything is magnified and so if you have a chance to get better at something we have to find a way to get better at it and not take the easy road.”

Obama steps out as nation confronts confluence of crises