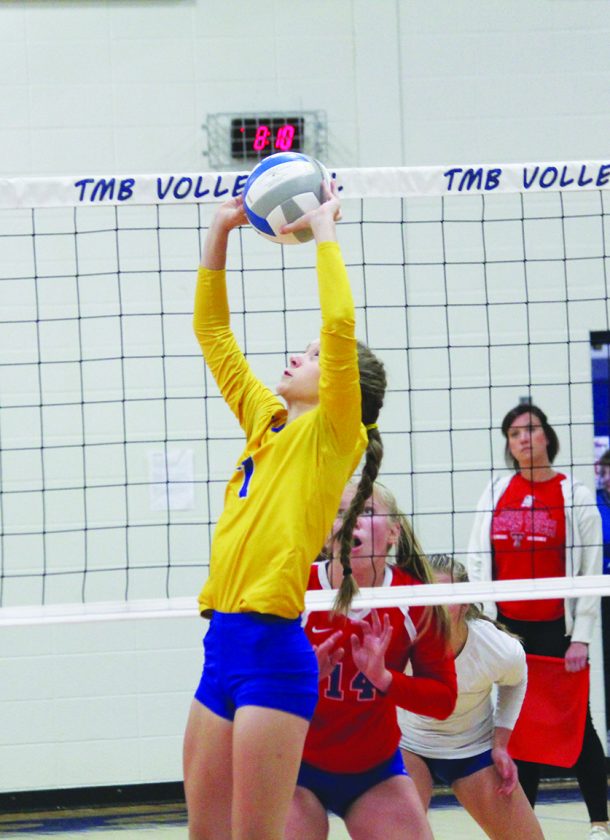 Photo by Jake Przytarski Minneota’s McKenna Yost sets the ball during their match against TMB on Thursday. The Vikings defeated the Panthers 3-0.

TRACY — The Minneota volleyball team weathered an early storm by upset-minded Tracy-Milroy-Balaton on Thursday and came out on top in a straight sets sweep for its eighth consecutive victory and 10th straight win in Camden Conference play.

Minneota assistant coach Kaley Buysse said the team’s front row played a large role in helping to turn the tide after a strong start by the Panthers.

“I think we really stayed together and tried to execute on our offense in the front row when we were struggling a little bit defensively,” said Buysse. “The girls were able to kind of pull through and pick up in the spots where we were falling behind.”

Though the result wasn’t the one he was looking for, TMB coach Rick Haberman was pleased with how his team competed.

The Panthers came out of the gate with a great deal of energy and poise in the opening set by taking an early 3-1 lead and seizing the momentum. Led by a dominant effort by Abby Hennen with seven kills on a 9-1 run, Minneota stormed back to take a 10-4 lead and never looked back en route to a 25-15 win.

Buysse credited Hennen for her ability to help get the team back on track when they need it.

“She really comes in when we need her to,” said Buysse. “She shows up defensively and doesn’t let any ball drop, that’s kind of her mentality on the court. Then (she) comes out strong for us on the front row and can pretty much put any ball away that she’s given. She does a great job adjusting for us as well and kind of keeping everybody on their toes and keep their head in the game.”

In the second set, the Panthers were able to match the Vikings point for point from start to finish and took an early 6-5 lead following a kill by Catherine Wendland. Guided by an ace from Mckenna Yost and a block by Abby Frie, Minneota climbed back and took the lead at 10-9 and never relinquished it in spite of TMB’s best efforts as the Vikings took the second set 25-21.

After falling behind early on in the previous two sets, Minneota was able to open up the third with a 4-1 advantage. TMB went on to respond with a 6-4 run to cut the deficit to only a point at 8-7, but the Vikings kept rolling afterwards with a 10-3 run of their own to make it 18-10. Minneota held on to take the match with a 25-16 victory in the final set.

Minneota (21-2, 11-0) will be back in action on Tuesday to take on Canby on the road at 7:15 p.m. After Thursday’s win, Buysse hopes that her team knows that they’re never out of a match.

TMB (15-6, 7-3) will be on the road in its next matchup against Lakeview on Tuesday at 7:15 p.m. With the season nearing its end, Haberman wants his team to strive to improve in all facets moving forward.