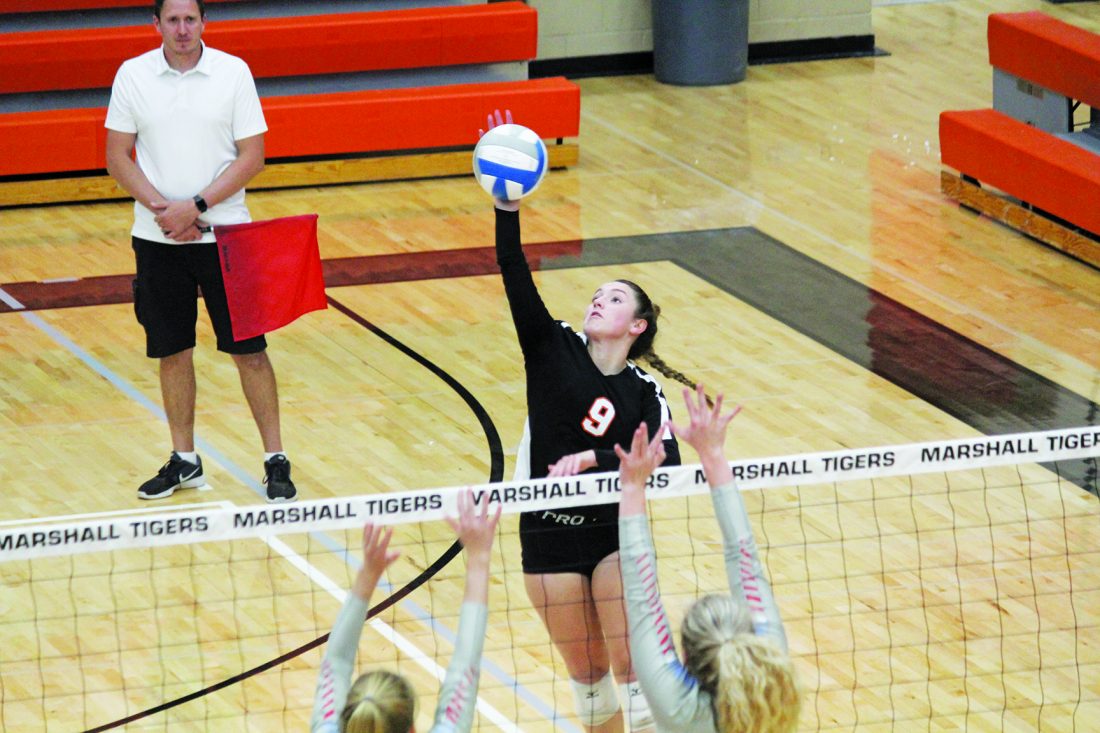 Photo by Jake Przytarski Marshall’s Bria Morris goes up for a kill during their match against Sioux Falls Lincoln on Monday. The Tigers defeated the Patriots 3-0.

MARSHALL – The fourth-ranked Marshall volleyball team played host to its third out-of-state opponent of the season on Monday with a matchup against Sioux Falls Lincoln, the sixth-ranked team in South Dakota’s Class AA field.

Much like their previous contests against River Falls (WI) and Brookings (SD), the Tigers proved too strong, as they came out firing on all cylinders to earn their fourth win in a row in a 3-0 final.

Marshall coach Dan Westby said their fast start helped set the tone for the rest of the match.

“One of the things we felt was important was to get off to a good start and we did that night,” said Westby. “I thought we kind of set the tone early and maybe got them on their heels a little bit and that made it difficult for them.”

Westby added that the team’s sharp play also loomed large in the outcome.

“We also did a nice job of limiting errors. (We) just didn’t make a lot of errors tonight and I think any time you can do that it’s pretty difficult for anybody to beat you,” said Westby.

The quick start for the Tigers was established at the service line when Rachel Schwarz opened up the scoring with an ace, the first of six for Marshall in the opening set. Kate Bucher later added three and Jordyn Hilgemann recorded two of her own.

Westby said serving is a skill they’re always trying to improve on in order to be their best.

“We felt that coming out, not just (Monday) but every night, we think serving is a skill that we have to be good at and I thought it was very good here,” said Westby.

Following a 4-0 run guided by Schwarz, Marshall’s defense began to take over as Logan Sherman and Paige Andries gave the Patriots hitters fits with multiple blocks that helped push the team’s lead to 11-3.

Westby said it was one of the team’s best efforts in the blocking department.

“I thought this was one of our better blocking matches. I thought we did a nice job of timing things up and were able to block a number of balls and that certainly hasn’t been a strength for us this year,” said Westby.

With a comfortable lead in hand, Marshall cruised to a 25-12 win in set one.

The fast start that propelled the team in the previous set lifted them once again in the second as Marshall jumped out to a 7-0 lead highlighted by another ace by Hilgemann and a big kill by Sherman. The Tigers went on to limit the Patriots to only seven points in the set with a 25-7 victory to take a 2-0 lead.

Marshall sealed the match in the third set by establishing complete control early on with a 16-4 lead. The Patriots did their best to mount a comeback by outscoring the Tigers 9-4 to make it 20-13, but Marshall held on in a 25-14 final.

Next up for the Tigers (18-4, 6-0) is a Big South Conference West matchup with Redwood Valley at home to determine a winner in their side of the conference. Westby said the team takes a lot of pride in winning the conference and hopes they’ll be ready again today.

“We have a big match here at home versus Redwood Valley. The winner wins our half of the conference so we always feel that that’s something that we take a lot of pride in and hopefully we’ll be ready to go again,” said Westby.