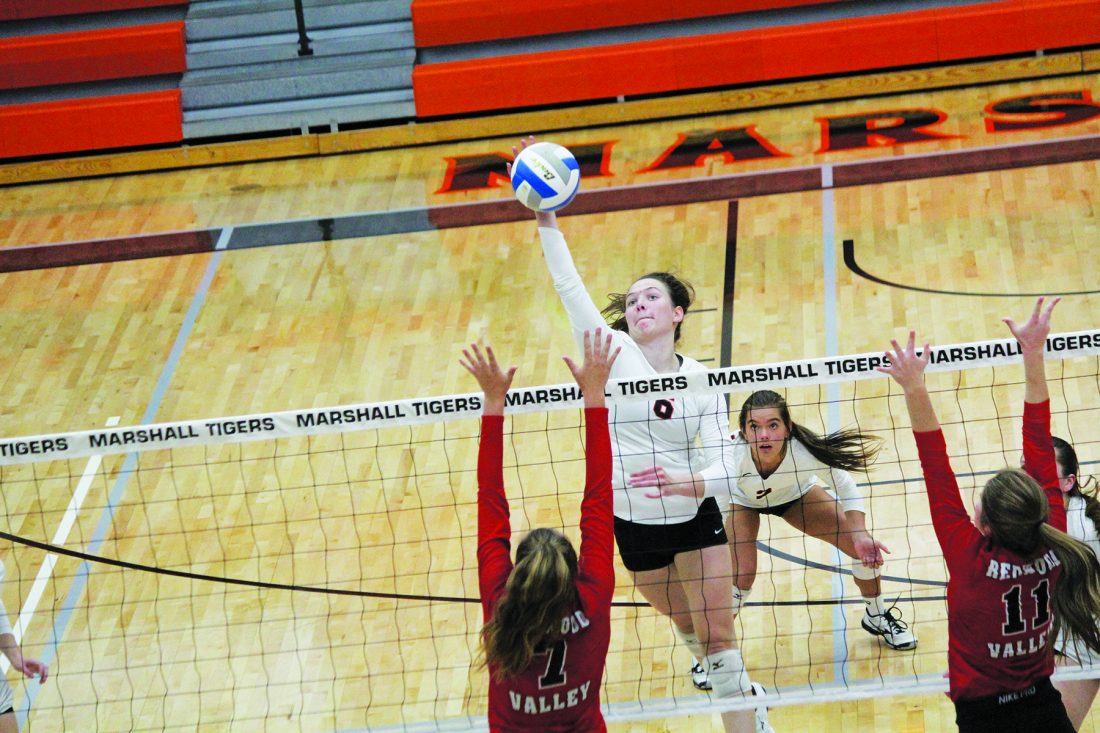 Photo by Jake Przytarski Marshall’s Paige Andries goes up for a kill during their match against Redwood Valley on Tuesday. The Tigers defeated the Cardinals 3-0.

The victory for Marshall marked the end of Redwood Valley’s 11-game win streak and secured a spot for the Tigers in the conference championship game where they will take on St. Peter for a second year in a row.

Coach Dan Westby said winning a conference championship is a team goal each and every season and credits the hard work of his players for the program’s sustained success.

The Cardinals – fueled by their own aspirations of a conference title – were sharp and determined to get the upper hand in game one and went point-for-point with the Tigers resulting in a slim 13-12 lead for Marshall midway through the set.

Westby praised the Cardinals for a strong effort throughout the match.

“I think you need to tip your hat to Redwood Valley. I thought they came out and they were focused and ready to go,” said Westby. “It took us a few points to adjust to that and once we did I thought we were fine.”

Following the back and forth start to the set, Marshall began to get the better of the play and went on a 4-1 run that forced a Redwood Valley timeout. The Cardinals remained within striking distance down the stretch, but could not catch up to the Tigers in a 25-21 final.

The Cardinals remained locked in to start the second set and had the Tigers on their heels early on with a 9-6 lead, their biggest advantage of the match. In response, Marshall dug deep and re-established momentum with a 5-2 run highlighted by a block from Logan Sherman to tie the set at 11-11. The remainder of the set tilted heavily in Marshall’s favor as they went on to outscore Redwood Valley 15-5 to seal the win.

Westby attributes the shift in momentum to limiting the easy balls given to the Cardinals.

“We stopped giving them easy balls and then it was a lot more difficult for them,” said Westby. “It would have been nice obviously to see that in set one but you don’t always get what you want. We were happy with the way our kids kind of rallied and came back and put things together in sets two and three.”

The inconsistent play that provided an opening for the Cardinals in the previous two sets was eliminated altogether in the final set as the Tigers stormed out to a 14-6 lead and went on to clinch the match with a 25-11 victory.

Westby said it was one of those games where the team got better as the match went on, especially on defense.

“I thought our defensive effort as the match went on got better and better,” said Westby. “Again, we just kept balls alive and stopped giving them easy balls and turned a lot of those balls into points. I thought it was one of those matches where as the match wore on the better we got.”

Next up for the Tigers (19-4, 7-0) is a matchup against Tracy-Milroy-Balaton at home on Thursday at 7:15 p.m. Westby anticipates that this season’s meeting with the Panthers will be another tightly-contested battle.

“Whenever TMB and Marshall get together you can throw out the records, it’s always a highly-competitive match,” said Westby. “We expect more of the same on Thursday so we’re going to have to be ready to go.”