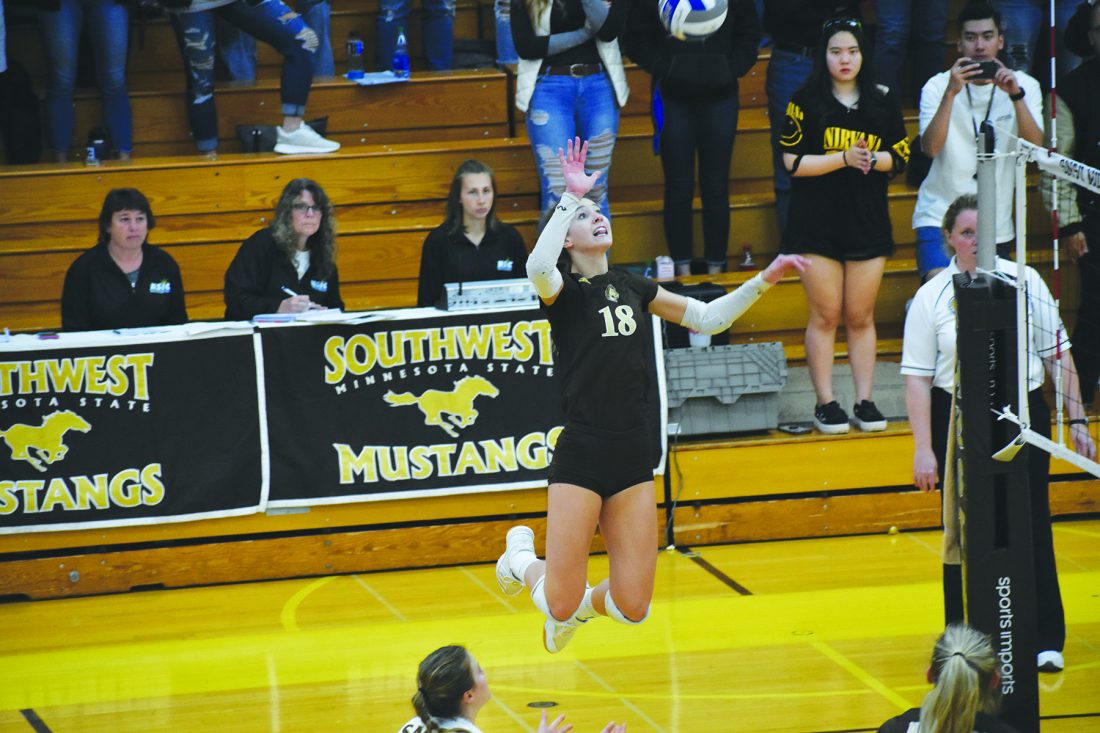 Photo by Sam Thiel SMSU’s Angela Young goes up for a kill during their match against MSU Moorhead on Saturday. The Mustangs defeated the Dragons 3-0.

MARSHALL — After earning a spirited come-from-behind victory against No. 8 Northern State University on Friday, the No. 9 Southwest Minnesota State University volleyball team hoped to continue that momentum on Saturday afternoon against MSU Moorhead. The Mustangs did just that, holding on in their first two sets against the Dragons before using a strong third frame to earn a 3-0 (25-22, 25-23, 25-15) victory and a weekend sweep.

SMSU coach Terry Culhane said they know they can’t take any opponent for granted and felt MSU Moorhead came ready to play right away, but added they were still able to accomplish their goal.

“We should know better if we’re thinking we can just walk through two days of weekend play in this league, it just doesn’t work that way. Sometimes it’s interesting coming off a match that’s full of excitement but one of the things we need to learn is we need to be ready to play all of the time,” Culhane said. “I thought that Moorhead came out and served really well and gave us trouble and we weren’t really ready; sometimes it’s hard to turn it on if you’re not ready to go when it starts. But we accomplished what we wanted, we wanted to win twice this weekend and we’ll enjoy that and then try and be ready to go next weekend.”

It was a tight battle right from the start, as the two teams traded points before SMSU went on a 6-2 run to take a 12-8 lead. After the Mustangs later built a 17-11 advantage, the Dragons battled back to tie things up on a pair of occasions, but SMSU closed the set with a 4-1 run to take the opening frame 25-22.

Set 2 saw the Dragons jump out to an 8-4 lead early before the Mustangs answered with a 5-1 run to tie things up at 9-9 and an Angela Young kill gave SMSU a one-point advantage. MSU Moorhead would go on a 6-2 run to take a 16-13 lead, but the Mustangs countered with a small charge led by Young to get back in front at 21-17. The two teams then traded points the rest of the way, with SMSU holding on down the stretch to take the second set 25-23.

Just like it did in the second frame, MSU Moorhead had another solid start in the third set, going up 6-2 before SMSU went on a 6-0 run, with the final four points of the spurt highlighted by blocks from Sarina Smith, Meg Schmidt and Young.

After an ace from Payton Hjerleid and a kill from Schmidt gave SMSU a 13-8 lead, the Mustangs used another key run to increase their advantage, this time led by the play of Lydia Sussner. The freshman recorded five of the next eight points to put SMSU up 21-12, and the Mustangs held on down the stretch to take the third set 25-15 and earn the sweep.

Young led the way for the Mustangs with 14 kills while Schmidt and Sussner each added 11 and Jenna Walczak had nine. As a team, SMSU had a hitting percentage of .341 on the afternoon, including a .393 clip in the third set.

Sussner said their key on the offensive end was utilizing their middles and taking advantage when they were given an open attack.

“I think just making their middles track and honor our middles,” Sussner said. “A lot of times we were having open shots because other people were getting kills and we’re balanced in the fact that we have pretty much everyone on the floor that can score in the front row.”

Freshman continue to make an impact

SMSU’s three freshmen – Sussner, Rachel Fink and Alisha Bengen – were able to have a signature performance against the Dragons. Sussner had 11 total kills while adding a service ace, two digs and a block assist while Fink led the team in digs with 15 while Bengen led in set assists with 29.

Culhane said he was pleased with all three of his young players’ effort throughout the match and hopes they can continue to learn with each experience.

“I thought with Lydia, one of the things we’re trying to get her to do is be quicker in the middle and make herself available so we can set to her and I thought she did that,” Culhane said. “Rachel does a lot of things for us, she passes and serves and hits outside a bit, but really the biggest thing for us right now is her being able to pass-serve consistently and that helps everyone. And Alisha has a tough job as well to run as a setter; there’s quite a difference going from a high school senior setting that offense to what we’re asking her to run here. She’s learning, and hopefully those young kids just continue to get better.”

SMSU (10-2 overall, 4-0 NSIC) will continue its homestand next Friday when it faces Upper Iowa University at 6 p.m. in the “Red Out” match before taking on Winona State University next Saturday.