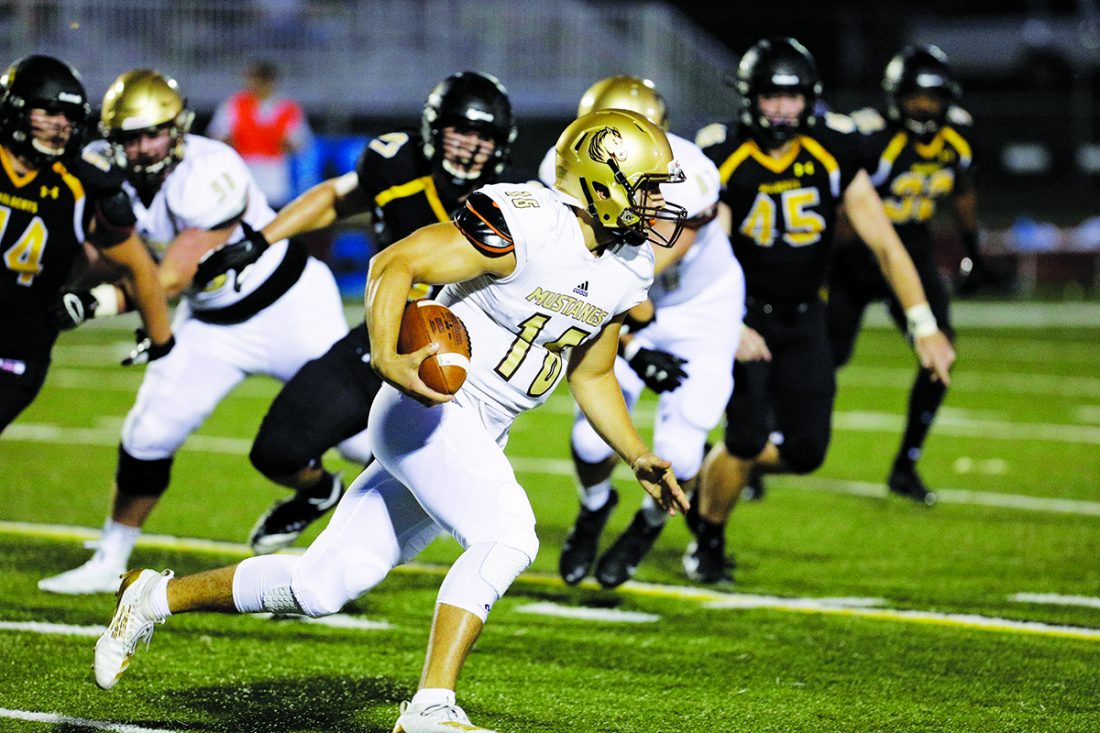 Photo courtesy of Bob Berry/Mike Grosz/Wayne State Sports Information SMSU’s Paul Herrera looks to run during their game against Wayne State College on Saturday. The Mustangs fell to the Wildcats 19-13 in overtime.

WAYNE, Neb. – Wayne State scored the game-tying touchdown and point after attempt with three seconds left in regulation and then scored on an Andy McCance to Mason Lee 10-yard touchdown pass in overtime to earn a 19-13 overtime victory over Southwest Minnesota State in Northern Sun Intercollegiate Conference football on Saturday night at Cunningham Field.

In overtime, SMSU (0-2) failed to pick up a first down in the extra frame and Skyler Crew missed a 35-yard field goal wide left to keep the game tied.

“It was a hard-fought game and with it not being a high-scoring one, every possession became a battle for field position,” SMSU coach Cory Sauter said. “As bad as it was in the first quarter, we were only down six and had a touchdown lead at one point before they went down and tied it. We played really solid defense up until that last drive and on offense, we had opportunities to extend drives and run down the clock but just couldn’t get it done. It was a tough one to swallow.”

WSC dominated time of possession and racked up 550 yards of offense on 96 plays while SMSU amassed just 185 yards on 49 plays. WSC finished the game with 32 first down while SMSU was held to 11.

SMSU starting quarterback Steven Nava, who was starting for an injured Boyer Bouman, completed 9 of 18 passes for 135 yards and one touchdown, but was injured in the third quarter. He was replaced by Paul Herrera, who completed 1 of 3 pass attempts for five yards.

Daniel Davis caught a team-high five passes for 70 yards and one touchdown to pace the SMSU offense. Trey Sachs rushed for a team-high 25 yards on eight carries while Herrera added 20 yards on five attempts.

SMSU had three starting wide receivers and a starting tight end miss the game with injuries.

McCance completed 21 of 38 pass attempts for 290 yards, two touchdowns and one interception for the Wildcats. He also rushed for a game-high 95 yards on 17 attempts. Taurean Grady caught a team-high five passes for 59 yards for the Wildcats.

The SMSU offense struggled in the opening quarter picking up just two first downs and 18 total yards on nine play.

WSC put together a pair of long scoring drive in the first quarter but the SMSU defense tightened up and forced the Wildcats to settle for 42 and 29 yard field goals by Ethan Knudson to build a 6-0 lead after one quarter.

SMSU was finally able to reach the scoreboard in the second quarter behind a huge 42-yard pass from Steven Nava to Jalen Coleman. The Mustangs were not able to take advantage of the big play and were forced to have Skyler Crew boot a 40-yard field goal with 4:58 left in the half to cut the deficit to 6-3.

WSC ran 48 plays to SMSU’s 18 in the first half with the Wildcats amassing 256 yards while SMSU was held to 53 yards.

Trailing 6-3 in the third, Nava led SMSU down the field and completed a 20-yard touchdown pass to Davis with 5:26 left in the quarter to put the Mustangs in front at 10-6.

Following a WSC punt, SMSU took over late in the third and saw Nava injured on the ensuing dive. Herrera took over and the Mustangs picked up two first downs moving the ball inside the WSC 25-yard line. Crew extended the SMSU lead with a career-long 43-yard field goal with two seconds left in the third to give SMSU a 13-6 advantage.

The SMSU defense forced a pair of WSC punts and turned the Wildcats over on downs at the 13-yard line in the final quarter, but SMSU wasn’t able to pick up key first downs on offense to help keep the Wildcats in the game.

WSC turned the ball over on downs at the SMSU 13-yard line with 3:53 remaining in regulation, but SMSU was forced to with under three minutes remaining. Mustang punter Adien Belt hammered a 57-yard punt to force the Wildcats to starting the game-tying drive at their own 23-yard line. WSC picked up six first downs on the ensuing drive before scoring with three seconds left.

Onte Burns recorded a team-high 12 tackles including two for loss with teammate Gage Roberson added 11 stops with three for loss. Davaeon Johnson also reached double figures in tackles with 10 and had one for loss. Marshawn Reese picked up an interception for the Mustangs in the third quarter.

Sauter said he felt they played solid defensively throughout the majority of the game, especially with their ability to keep Wayne State out of the end zone until late in the fourth quarter.

“We certainly gave up yards and first downs and struggled getting off of the field, but the encouraging thing was we held them out of the end zone until the last drive. If you would have said before the game that we would only allow two field goals and 13 points in regulation, we would be excited about that, because that’s a winning effort for a lot of teams,” Sauter said. “It was truly a team effort, but we just didn’t get it done as a team, especially on the road.”