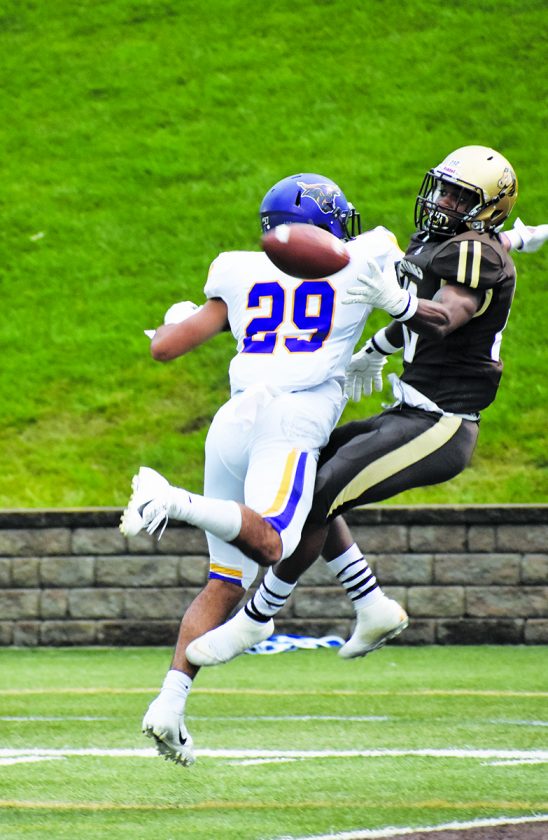 Photo by Sam Thiel SMSU’s Daniel Davis reaches around the defender to make a catch during their game against MSU Mankato on Saturday. The Mustangs fell to the Mavericks 38-23.

MARSHALL – The Southwest Minnesota State football team entered Saturday’s season opener against No. 3 Minnesota State University, Mankato as heavy underdogs but proved to be a worthy foe by giving the Mavericks all they could handle in a thrilling second half comeback attempt.

Though the bid would fall short in the end with the Mavericks able to hold on to a 38-23 victory, SMSU coach Cory Sauter was proud of the way his team battled to nearly pull off the upset.

“It was just fun to see our guys respond in the second half. I mean that game could’ve gotten ugly in a hurry if we would’ve played at the same level in the second half as we did in the first half,” said Sauter. “Our guys didn’t back down and they played extremely hard. As I told them after the game, I was really proud of just how they battled, and they should not walk off that field with any embarrassment or anything of that nature. We were just a few plays away.”

Due to a second quarter injury sustained by starting quarterback Boyer Bouman, the Mustangs had two different signal callers take live snaps in Saturday’s contest and both showed promise against a vaunted Maverick defense.

Bouman played the entirety of the first half and finished 9 of 19 with 162 yards and an interception. The senior quarterback added a touchdown late in the first half to wide receiver Daniel Davis, who made a circus catch in the corner of the end zone that proved vital in the team’s comeback bid.

Sauter acknowledged that Bouman missed on a few throws but was pleased overall with his effort.

“He came out and left a few balls short, and part of it was just part of first game nerves but he ran our offense fairly efficiently,” said Sauter. “Unfortunately, he took some hits in the game that really took its toll and obviously he could’ve taken some snaps in the second half, but we wanted to make sure we took him out and were cautious with that whole thing.”

JUCO transfer Steven Nava took over for the remainder of the game and caught fire on the team’s opening drive of the second half by connecting with Davis twice on a seven-play, 64-yard drive that ended with a two-yard touchdown pass to tight end Carter Damlo. Nava would finish his debut 15 of 21 with 182 yards through the air, a pair of touchdowns and an interception.

“Nava came in and created a spark and it was good to see that,” said Sauter. “He went in there and didn’t shy away from the challenge and ultimately he made some plays happen and it was just good to see him step up to the plate and guys rallied around him too. Obviously, you’d want the one (interception) back but that’s part of playing quarterback”

Save for one lapse late in the game that helped seal the Mavericks victory, the Mustangs mostly accomplished the latter mission, but simply had no answer in trying to contain Gunn, who finished the contest with 247 yards on the ground and three touchdowns while averaging 7.8 yards per tote.

Sauter tipped his cap to the Mavericks for doing damage in the run-game and hitting on deep throws when they needed to.

“We tried to stop the run, but I tell you what, they certainly have the personnel to do what they want to do,” said Sauter. “I mean they’re going to wear you down a little bit and they certainly connected on the deep shots. They were truly on point. You hope that (they’re) a little bit off, but we’d much rather have it that way I mean you tip your hat if they’re making those big plays.”

Unfortunately, the Mustangs were unable to come up with any semblance of a run-game of their own in the game as running backs Trey Sachs and Max Simmons combined for only 11 yards on nine carries.

However, SMSU did find success when turning to freshman running back Duce Reynolds late in the second half. On two carries, Reynolds rushed for 26 yards, which prevented the team from finishing with a negative run-total.

Though he was proud of the way his team performed, Sauter says he’s having his team erase Saturday’s game from memory in order to prepare for what lies ahead in Week 2.

“We’re going to start from scratch. We’ve got a new opponent, a new cycle, a new work week and it’s 0-0 going into the next game,” said Sauter. “We’re not going to pat ourselves on the back and go ‘hey we played them close and had our chances’. Anybody can say that. If you start believing all of that, all of a sudden, you’re not putting the work in that you need to in order to make an improvement or take that next step. So that’s what we have to guard ourselves against is not being happy with where we’re at. We lost the game, we played hard, but we lost the game so now we just go onto the next one.”

Kickoff for SMSU’s second game of the season will take place at 6 p.m. on Saturday in Wayne, Nebraska. 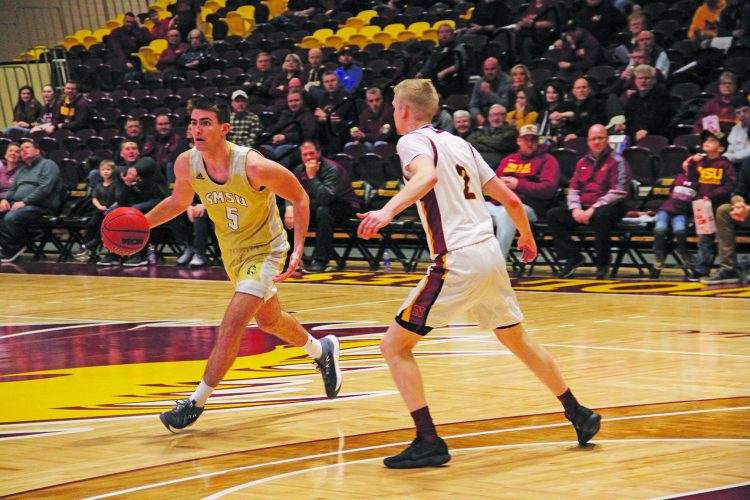 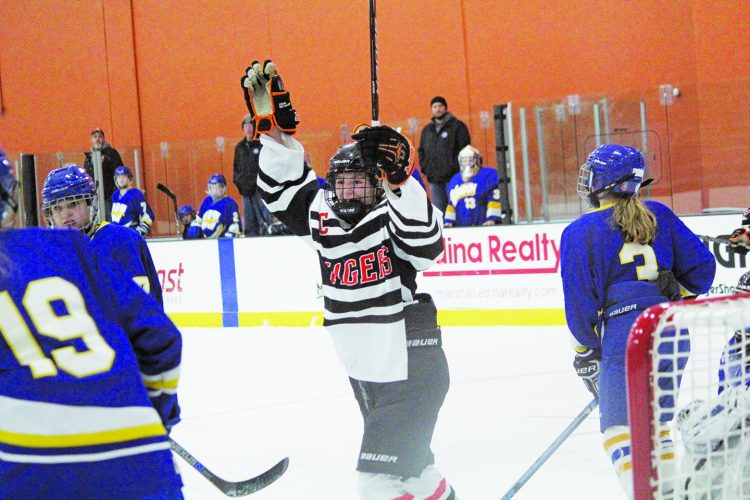 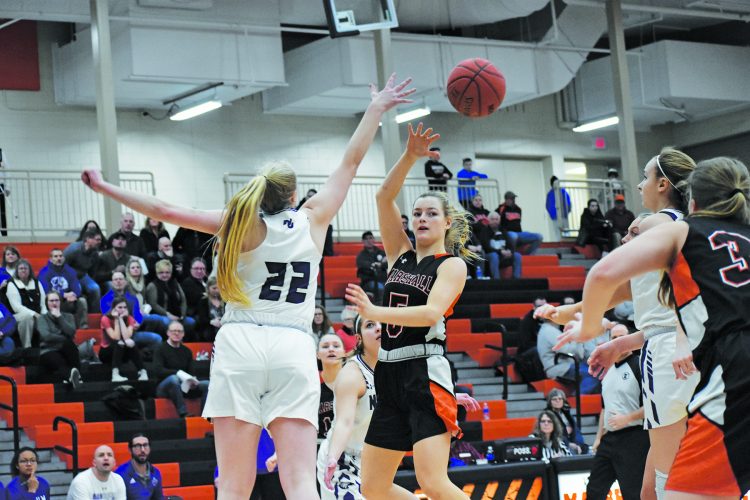 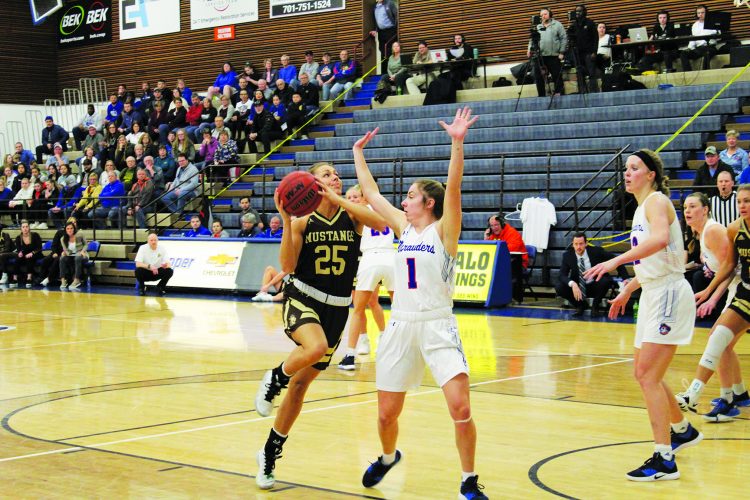 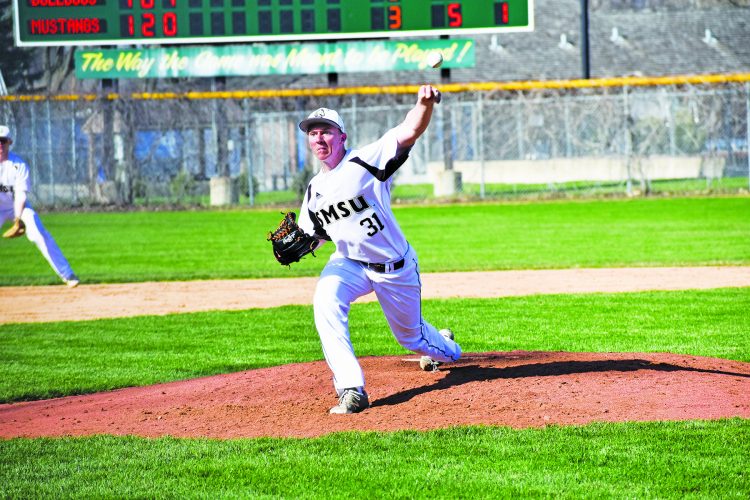