REGION 13C TOURNAMENT: The drive to 5 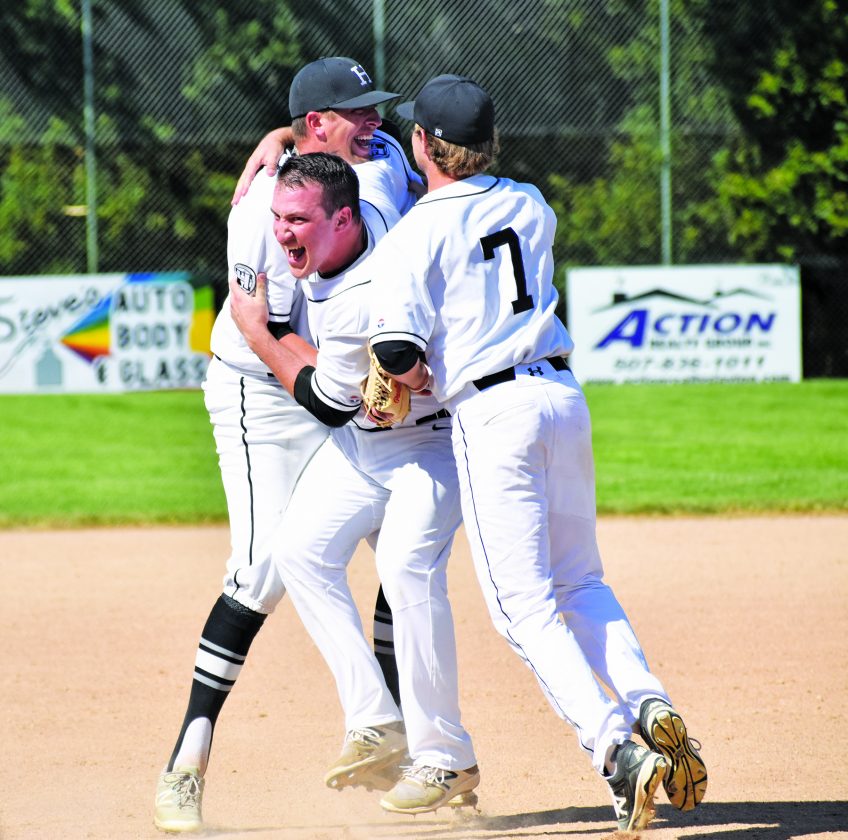 Photo by Sam Thiel Members of the Hadley amateur baseball team celebrate after defeating Luverne 10-5 in the Region 13C tournament on Saturday to clinch a spot in the state tournament.

HADLEY – The Hadley Buttermakers have tuned up a lot of classics so far in this postseason.

In five games, the Buttermakers have fought and clawed their way to come-from-behind victories in all of them.

The latest hit on their comeback tour was a special one.

Sam Erickson tossed eight solid innings while the Buttermaker offense exploded for nine runs in one frame, as Hadley held on to win Game 2 of its best-of-three series 10-5 Saturday to sweep the Luverne Redbirds and punch its ticket to state.

The state-clincher marks the fifth consecutive appearance for Hadley in the tournament, and manager Myron Bennett is happy for his players.

“When you start the season, it’s kind of what you’re always playing for, but making it five years in a row, that’s quite an accomplishment. We didn’t have the season we wanted to start out with, but we stuck together,” Bennett said. “We’ve got some young guys who are experiencing this for the first time and that’s what’s really fun about this. We’ve got veterans that have been here and now the young guys are getting to experience the state tournament.”

The second-seeded Redbirds, looking to extend the series to a final Game 3 on Sunday, pieced together a small one-out rally in the top of the eighth. Luverne scored twice with an RBI double and an RBI single to cut the deficit to five, but Erickson got a strikeout to end the inning. The Redbirds later got a pair of baserunners aboard in the ninth, but closer Max Zwart got a popout for the second out before slamming the door shut with a big strikeout to seal the win.

Zwart said being able to return to the state tournament is an exciting feeling, but added this trip might be a little more special after the ups-and-downs they went through this season and is proud of the way his teammates stuck together.

“If you would’ve asked me a month ago where we would end up, I’d be happy to get out of the first round. For whatever reason, we stuck together and this group has been together for a long time; we’ve added some young guys that have really contributed and worked hard,” Zwart said. “Every one of them has been fun, but this one’s a little bit more special just because of how the year started for us. We’re just hoping to get it to the next guy, get it to the next game and see how far we can keep it running.”

The Buttermakers, who claimed Game 1 of the series with a thrilling 6-5 victory in Luverne, got off to a slow start offensively. Hadley had averaged eight runs per game in the Region 13C playoffs going into Game 2, but couldn’t string together more than two hits in an inning throughout the first four frames on Saturday. Fortunately for Hadley, it took Luverne a little bit to warm up as well.

Erickson kept the Redbird bats in check to start, throwing a pair of scoreless innings before Luverne put some pressure on the Hadley starter with a bases loaded situation with no outs. The Buttermakers were able to turn a double play and allow a run before an infield single quickly gave the Redbirds a 2-0 lead after three innings. A solo home run in the top of the fifth pushed Luverne’s lead to 3-0.

Erickson, who finished his outing by allowing 11 hits and striking out four, said he got out to a rough start but credited his teammates for keeping his confidence at a high level.

“I had a little bit of a rough start, kind of lost my control but just staying confident and knowing that our guys are going to produce runs and right the ship through the rough spots,” Erickson said. “I felt really good out there and it’s just all confidence and I know these guys are going to pick me up no matter when I’m down.”

Not only have the Buttermakers playoff victories featured a comeback effort, they’ve been able to take the lead for good in the fifth inning or later in all of them. Seven hits and nine runs later in the fifth, the Buttermakers were back in business, this time with a lead they wouldn’t give up.

An RBI single from Joe Larson got the scoring started before Nick Bruning drove in a pair of runs to tie things up at 3-3. Run-scoring hits from Zwart and Justin Benda, as well as back-to-back hit batters and an RBI groundout put Hadley up 9-3 to cap the big inning. The Buttermakers later added a run in the seventh to extend their advantage to 10-3.

Zwart said they were able to capitalize on an error that helped spark the offense and hitting just became contagious up-and-down the lineup.

“Andrew (DeBoer) threw really well for Luverne and I think they had one error that kind of cost them,” Zwart said. “After that, it just seemed like balls were finding the barrel of the bat and we started hitting the ball and hitting’s contagious. A couple of guys hit a couple of balls hard and then it just kind of snowballed after that.”

The Buttermakers still have a little work in front of them this week, as Hadley will square off with the Fairmont Martins in a best-of-three series to determine the top two seeds at state. Game 1 is scheduled for Wednesday at 7:30 p.m. in Fairmont.

Erickson said their biggest takeaway is to maintain the confidence they’ve gained throughout the second half of the season and all of the postseason and they’re excited for the chance to make a deep run at state.

“I think just staying confident and knowing that just because we didn’t win the league this year or we’re not the No. 1 seed, we’re still Hadley baseball and we can still compete with anybody in this league and we’re excited for the opportunity to go back to state again,” Erickson said. “It makes the whole summer worth it.”