PREP SOCCER: Marshall takes St. Peter to double overtime, wind up with 1-1 tie in first game of the year 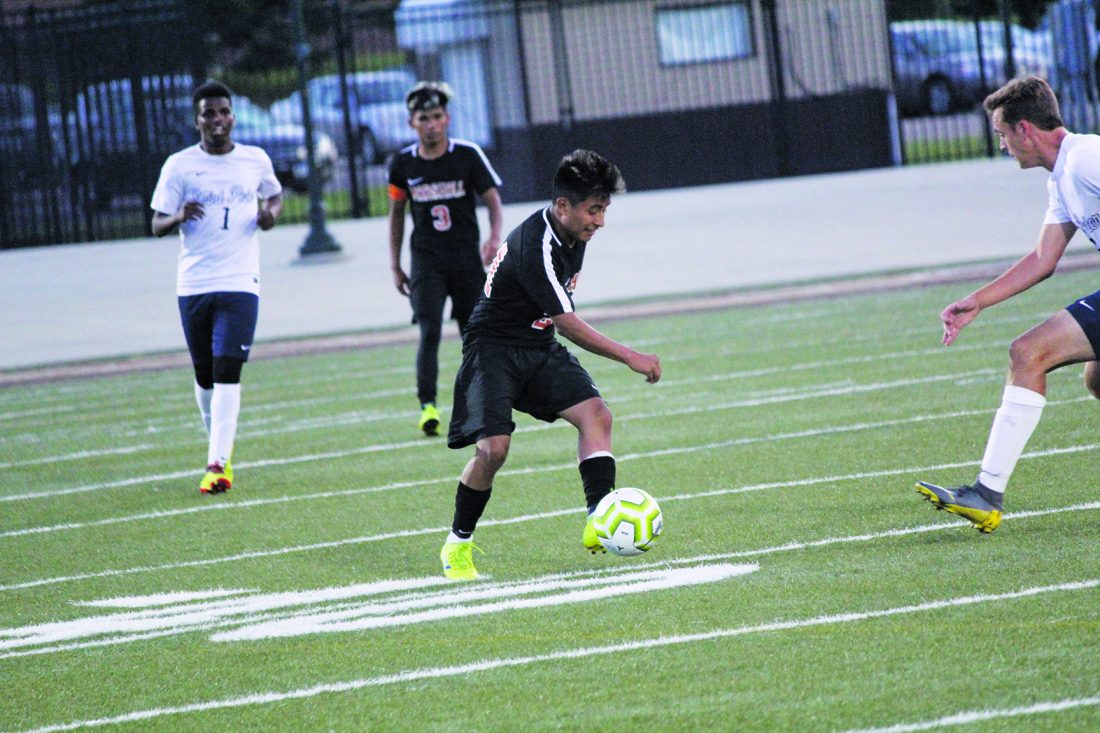 Photo by Jake Przytarski Marshall’s Ariel Ramon Ramos controls the ball during their game against St. Peter on Friday. The Tigers and the Saints tied 1-1 in double overtime.

MARSHALL – Regulation time and two five-minute overtime periods were not enough to decide a winner in Friday’s season opening matchup at Mattke Field as the Marshall boys soccer team was forced to settle for a 1-1 tie against the visiting St. Peter Saints.

Marshall coach Roberto Esparza tipped his cap to the Saints for a hard-fought match, and went on to identify a couple of areas that they will look to improve on in their next game against Waseca today.

“We played against a good team and it was a good match too,” said Esparza. “We need to work a little bit more on communication. Communication is a key for this team right now. We practiced the whole week passing and they never did it, but we have a game tomorrow. I hope we can do better (with it) (tomorrow).”

In the opening half, both teams took some time to create any scoring opportunities with play relegated to midfield. The first legitimate chance of the game came midway through the half when the Saints nearly scored on a header but was stopped by Marshall goalie Tristan VanDeVere.

After the save by VanDeVere, the pace quickened and the Tigers took advantage by shifting the play into St. Peter’s end where they were able to put their first shot on net but came up empty. It would take a penalty kick with 11:55 left on the clock for the Tigers to get on the board as Maher Abdaliah blasted a shot past the Saints goalie to give Marshall a 1-0 lead through 40 minutes of play.

Out of the half, the Saints began pressing for the equalizer and found it three minutes in on a goal by Zackeriah Kyoore. The score would remain tied all the way into the final minute of regulation before a shot by Mookey Stee from long-range nearly gave the Tigers the victory, but instead bounced off the crossbar and into the goalie’s hands to force overtime.

In both overtime periods, the Saints and Tigers continued to battle in hopes of finding the winning goal with plenty of scoring chances exchanged between the two teams. In the end, neither team could find the back of the net as the game came to an end with a final score of 1-1.

Marshall will look to pick up its first win of the season today in a matchup with the Waseca Bluejays at 12:15 p.m. at Mattke Field.