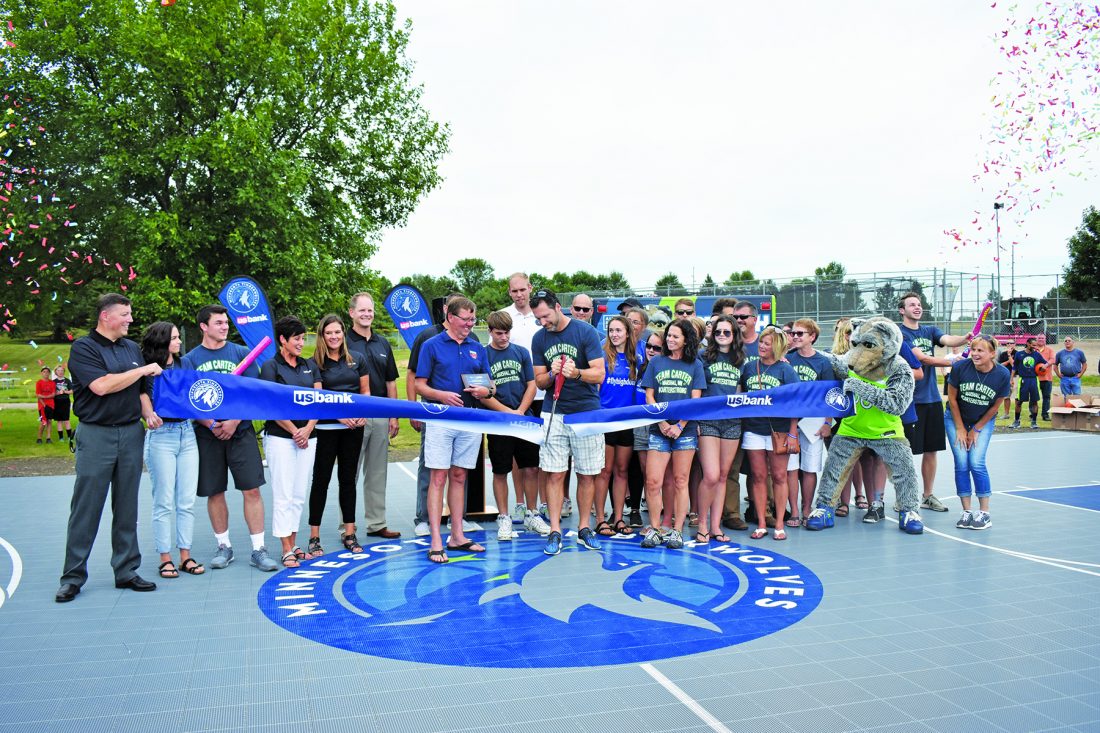 Photo by Sam Thiel Wade Boerboom (middle) cuts the ribbon to open “Carter’s Court”, the renovated basketball court at Independence Park as part of the Wolves’ “Our Courts. Our Future.” program on Thursday afternoon.

MARSHALL – The basketball court at Independence Park had seen a lot of wear and tear throughout the years. Now, it’s gotten a glimpse at its bright future.

On Thursday afternoon, the court, now named “Carter’s Court” in honor of Carter Boerboom, got a grand unveiling from the Minnesota Timberwolves and U.S. Bank. The court received a renovation as part of the Timberwolves’ “Our Courts. Our Future” program, presented by U.S. Bank and won the southern region vote over North Mankato and Dover.

Once marked with dirt and concrete and had no defining features, the court was refurbished with a state-of-the-art surface called suspended sport court flooring, which allows water drainage from the playing surface to help prevent slipping as well as reduce the amount of impact.

Marshall Mayor Bob Byrnes applauded the community for coming together to bring this idea into a reality.

“We are so proud that this court was chosen, that this community was chosen for this court and of course, a what a better community than this to have this opportunity,” Byrnes said. “This is a community that is all about our youth and our youth activities, including youth sports and basketball and what a great place for this in Independence Park. There’s a lot of work that went into this; our parks staff, our partners from U.S. Bank that were in on the planning, of course the Boerboom family, so thank you to everyone.”

Wade Boerboom extended the praise towards the community for their efforts with fundraising and credited the partnership with the Wolves and U.S. Bank to help create “Carter’s Court.”

“All of the fundraising that our families have done, this is really just your money coming back to you. This started with people setting up a fund down at the bank when Carter passed away to help the family out with things, and it was overwhelming how much money it was. So we decided to do a little bit of fundraising and present it back. We kind of had a little bit of seed money to get this going but a huge thanks goes to the Timberwolves and U.S. Bank for picking up the big portion of the check.”

Boerboom added the bond he and Carter had with sports, especially basketball, will get to be forever shown through the court.

“The connection with sports for Carter and for a lot of us, a lot of my really good friends I met playing sports and playing basketball and when Carter was sick in the hospital, you kind of run out of things to say and things to do, you could always talk about sports. It was just a connection that Carter and I had where we could sit up all night watching Sportscenter and talk about sports. That’s kind of what is awesome about this, we all came together to introduce this basketball court to the community and say thank you to everybody.”

Standing tall – literally, at 6’11” – amongst the Marshall youth was former Wolves player Greg Stiemsma. Stiemsma spent the 2012-13 season of his seven-year playing career with the Wolves and said the “Our Courts. Our Future” program is a great way to interact with the fans and the communities and get them to be active.

“It’s a great organization and a great program,” Stiemsma said. “Anything to inspire some kids to get off their phones and get outside and be active, whether it’s the game of basketball or not, but we want to take advantage and give them a court like this and an opportunity to play around.”

Stiemsma grew up in Randolph, Wisconsin and added he never got to play on a court like this.

“We would’ve killed for a court this nice,” Stiemsma said. “Where I grew up, we played in the driveways a lot and had a few outdoor courts that we would go to, but none of them were near this nice. I hope these kids get a chance to take advantage of it and get a lot of use out of it.”

Later in the evening, a 3 on 3 basketball tournament helped break in the new court, with 22 teams participating.

U.S. Bank Senior Vice President David Verkinderen said one of the biggest aspects with community involvement is through play and hopes to see the Marshall community continue to utilize the park and the court every day.

“At U.S. Bank we talk a lot about community involvement and one of the pillars involved with social responsibility of community involvement is play,” Verkinderen said. “That’s what this is really all about, hopefully see our youth develop some of their life skills and just coming out here and having fun. This day is really about Carter and the influence that he continues to have on our community.”