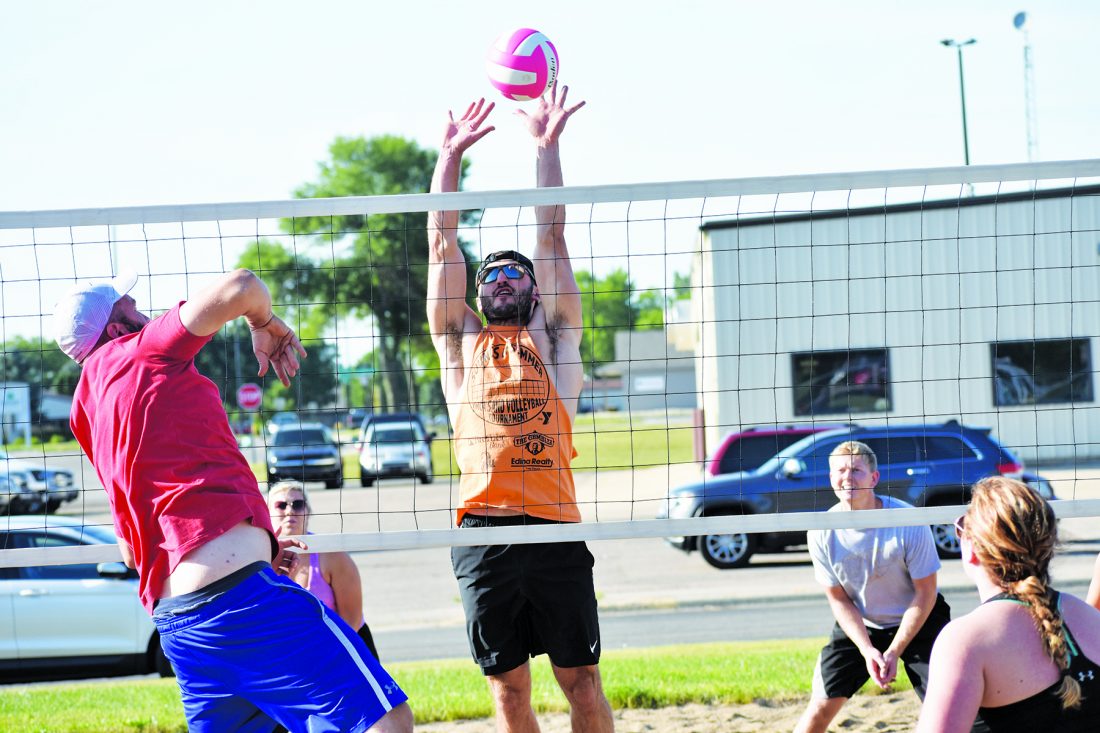 Photo by Sam Thiel Jeff Pooler (center) goes up for a block during the Sounds of Summer sand volleyball tournament Saturday at SMSU.

MARSHALL – With music blaring through the loudspeakers and the weather and sand in perfect condition, Sounds of Summer was in full effect Saturday on the campus of Southwest Minnesota State University.

After a successful first year, the Marshall YMCA sand volleyball tournament saw another strong outing in the second go-around. Six teams participated in this year’s tournament, with Sandy Shorts, Setters of Catan, Marshall Ites, School Scrubs, How I Set Your Mother and Crush It all converging to the sandy courts at SMSU.

“It’s great; it’s nice because you see some people that played last year and then you see some new faces, which means you’re doing a good job of getting the word out,” tournament site director Amanda Schwartz said on the turnout. “We’d also like to thank our sponsors, our players and everybody that steps up to make this possible because it’s a really fun day for a lot of people. There are a lot of helping hands and a lot of people that make that happen.”

Teams were broken up into two pools, with each team playing three games in pool play before later advancing into bracket play. Prizes included gift cards to The Gambler and Marshall Chamber Bucks.

Going into next year, Schwartz said they were able to take the feedback from their first tournament last year to make improvements and they hope to continue to improve it in the future.

“We made a lot of improvements, we took a lot of the feedback from last year; now we have court boundaries as well as bathrooms, concessions stands and a lot of things that people requested and wanted to see and we were able to deliver on that,” Schwartz said. “Next year, we’ll take any feedback on what people are hoping to see in coming years and we’ll improve it every year.”