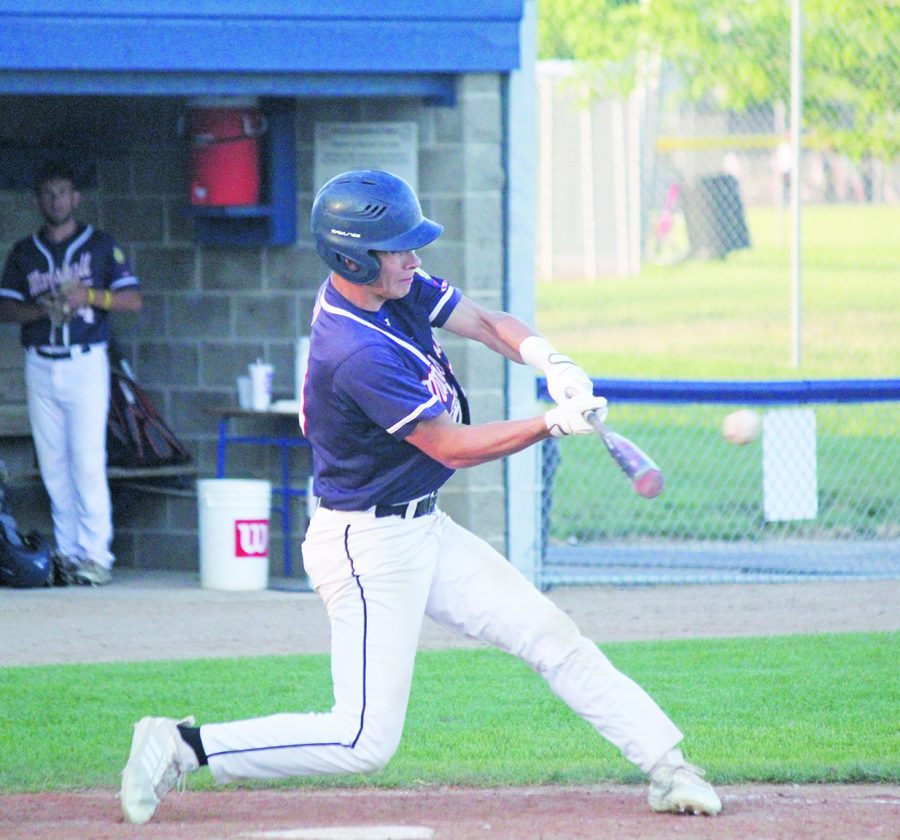 Photo by Jake Przytarski Marshall’s Kaleb Welvaert connects for a base hit during their sub-state tournament game against Waconia on Wednesday. The Mudcats won 6-4.

WACONIA – The No. 5 seed Marshall Mudcats earned a come-from-behind 6-4 victory over No. 4 seed Waconia in the opening round of the Sub State 15 tournament on Wednesday.

The victory moves the Mudcats into the quarterfinals where they will take on No. 1 seed Buffalo at 1 p.m. today in Waconia.

Unlike their previous matchup weeks prior at the Upper Midwest Classic, it was Waconia that struck first in the bottom of the second inning thanks to a pair of walks and a two-RBI double to take a 2-0 lead.

Mudcats starting pitcher Isaac Schmitt ensured no further runs were scored with a strong outing that lasted 4 1/3 innings in which he recorded eight strikeouts and allowed only a pair of hits.

After a being held scoreless for the first five innings, the Marshall bats came alive for a six-run rally in the sixth inning that would lift them to victory. The scoring was set in motion by four consecutive run-scoring hits beginning with a pop fly single by Nick Macchio to get the Mudcats on the board.

With runners still on, Marshall’s leading-hitter Kaleb Welvaert connected on a double to even the score at two apiece. Jordan Mernaugh and Peyton Grant each registered run-scoring base hits to make it 4-2 before a wild pitch and an RBI single by Jackson Hughes capped off the scoring at six runs.

After taking over for Schmitt in the fifth inning, Welvaert kept Waconia off the board again in the sixth before being replaced by Matt Hmielewski to begin the bottom of the seventh inning. Hmielewski would last just three batters before a two-RBI double forced the Mudcats to make one final pitching change with Logan Terfehr taking over with a runner on second and no outs.

In need of an out to curb the momentum, Terfehr registered a strikeout to the first batter before a single put the winning run at the plate. The threat was eliminated in their next at-bat thanks to a double play turned by Cody Greve to end the game at 6-4.