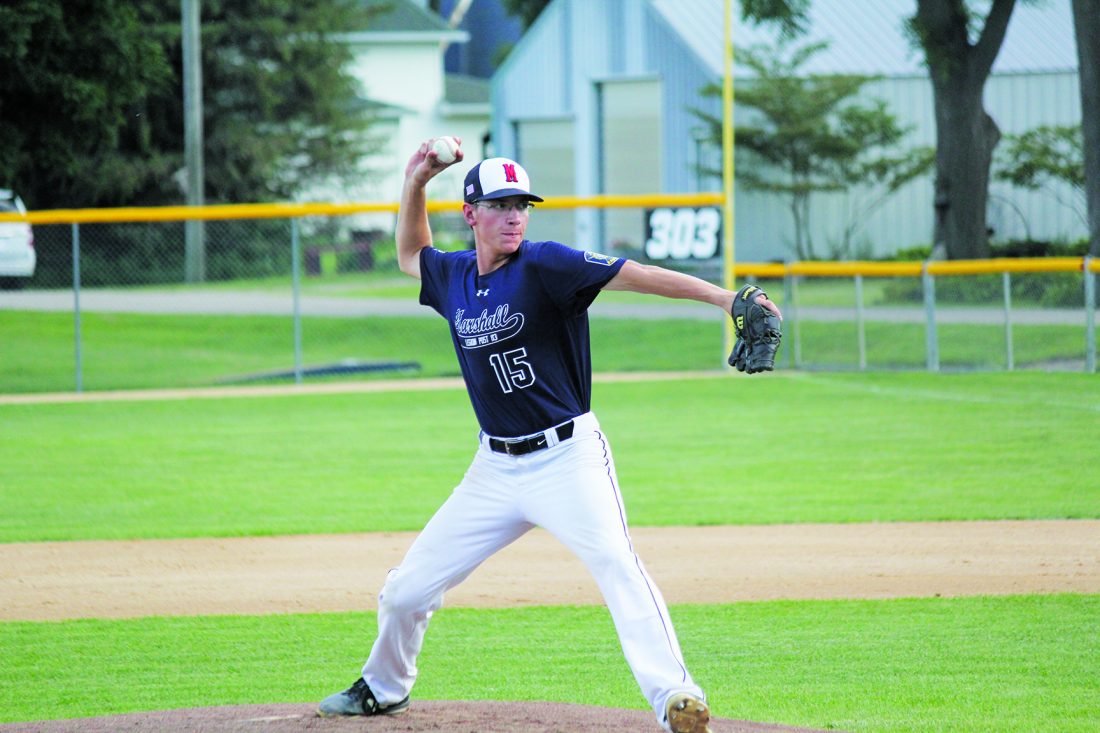 Photo by Jake Przytarski Marshall’s Logan Terfehr winds up a pitch during their game against Waconia on Saturday.

NEW ULM/ESSIG – The Marshall Mudcats wrapped up tournament play at the Upper Midwest Classic on Saturday with a two-game split featuring a 5-0 loss to the Mankato American Legion team and a 7-4 win over Waconia to finish 1-2 overall.

According to coach Mitch Maxwell, the tournament provides a unique challenge for the team every year due to the large number of highly-talented pitchers they face in each and every game.

“We talk about Legion baseball being a development piece for our baseball program and that’s why we come to these tournaments. That’s why we schedule things the way that we do,” said Maxwell. “We want to be challenged. We want to see good pitching so that when we turn around in the spring and when we get into section playoffs or we get into state tournament baseball we’ve seen things. These kids that are on this bench have all seen really good pitching in terms of fastballs and off-speed pitches, so I think the importance of that continues to be seen how it translates from here to the spring.”

The typically sharp-fielding Mudcats ran into some trouble defensively in Game 1 against the Mankato Americans as the team committed three errors in a 5-0 loss. In spite of the end result, Maxwell came away pleased with the performance of starting pitcher Kaleb Welvaert.

“I thought that Kaleb did a really nice job in Game 1. We didn’t help him out defensively,” said Maxwell. “We had runners on first and second we had bases loaded so a couple of things where we didn’t execute the way we needed to, but Kaleb had a very solid pitching performance for us.”

The Mankato ballclub got on the board in their first time up with a two-out single. The run given up would be the only one earned on the hill by Welvaert.

The score remained 1-0 until the top of the fifth inning when Mankato got two aboard with a single and a walk with two outs. A pair of errors later in the inning scored the two base runners and gave Mankato a 3-0 lead after five complete.

The Mudcats’ best chance to chip away at the deficit came in the bottom of the sixth inning when Welvaert connected on a ground ball double down the third baseline but was left stranded after a strike out and a line out ended the inning. The hit for Welvaert was one of two for the Mudcats in the contest with Cody Greve picking up the other in the third inning with a single.

Mankato’s final two runs came in the top of the seventh inning beginning with an error in the field followed by a single. Both base runners were brought home with a two-out single to right field that made it 5-0.

After being kept off-balance at the plate in their matchup earlier in the day, the Mudcats wasted little time getting the bats going against Waconia as the club generated three runs in the first inning alone and held on to win 7-4.

Maxwell attributes the team’s success at the plate to settling in after a long delay between games leading up to the tournament.

“(With) the time off that we had it takes a little bit of time to get back into a rhythm and when you come to a tournament like this you’re going to see really good pitching,” said Maxwell. “The Brandon Valley kid was very good. Mankato East threw a kid that we knew was very good so and then we saw good pitching again with Waconia, so I think it takes some time to get back into it back into the swing of things. We had finally seen enough, and the kids were good enough to be able to come out and put a bat on the ball and score some runs.”

After a tempo-setting 1-2-3 frame in the field highlighted by a strikeout for starting pitcher Logan Terfehr and a diving catch by right fielder Jackson Hughes, the Mudcats came alive at the plate in their first time up.

The three-run inning was set in motion by a line drive triple for leadoff hitter Matt Hmielewski and continued with a run-scoring single by Greve and another single by Isaac Schmitt. A double by Welvaert later in the inning scored both base runners to give the Mudcats an early 3-0 lead.

In the top of the third inning, Waconia climbed all the way back to tie the game up at three apiece via a pair of extra-base hits and a Marshall error. Following the third run, Jordan Mernaugh took over on the mound and remained there for a pair of innings before Cody Greve and Matt Hmielewski closed out the game.

With the score still tied heading into the bottom of the fifth inning, the Marshall bats came alive again with a two-out rally that was set in motion by a walk to Hmielewski and single by Greve. A throwing error scored Hmielewski on the ensuing at-bat and a pair of singles by Nick Macchio and Welvaert drove in the teams sixth and seventh runs to make it 7-3 after five complete.

Waconia went on to get one back in the sixth inning and had a golden opportunity to score more with the bases loaded. Pitcher Hmielewski and catcher Macchio made a run-saving play at home plate with a forceout to put two away and retired the next batter with a popout to end the threat.

Neither team added any additional runs, giving the Mudcats a 7-4 victory.

Next up for the Marshall (5-2) will be a doubleheader at home on Tuesday against Redfield (S.D.) beginning at 5 p.m.