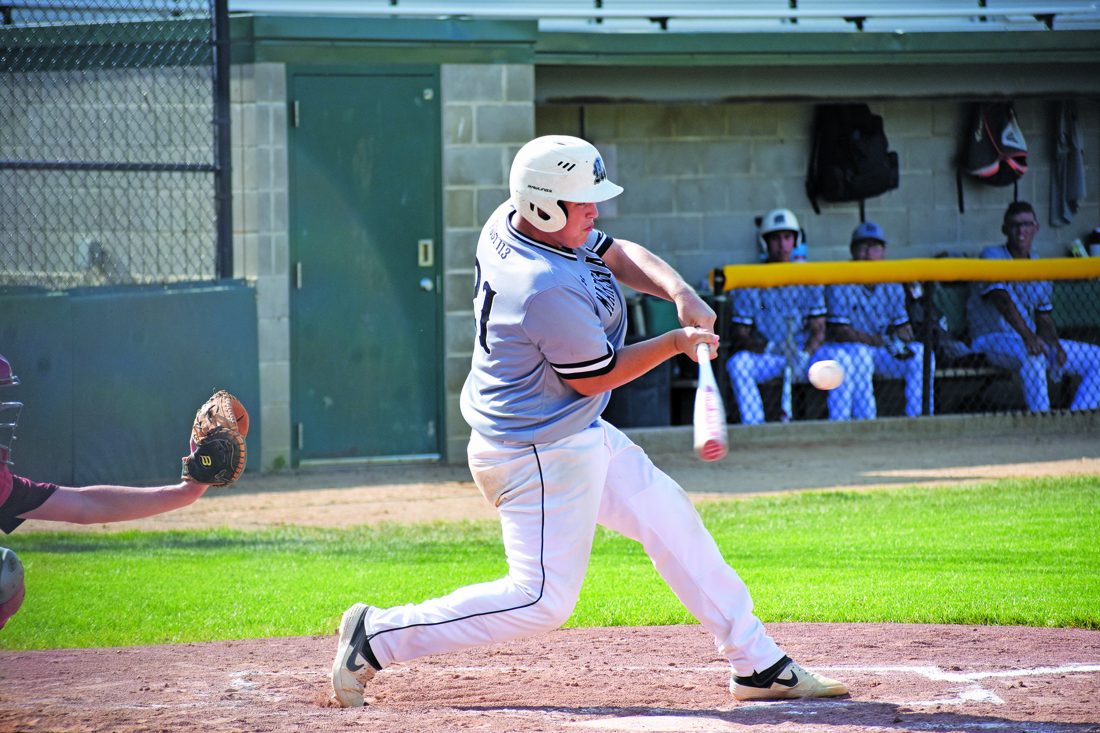 Photo by Jake Przytarski Marshall Black’s Cole Felcyn connects on a swing during the first game of Monday’s doubleheader against Willmar VFW. Marshall Black would sweep Willmar in an 8-6 final in game one and 9-3 in game two.

MARSHALL —  Marshall Black’s prowess at the plate was showcased again in Monday’s doubleheader matchup with Willmar VFW as the red-hot ballclub finished with a total of 20 hits in the twinbill to earn the sweep.

The pair of wins improves Marshall Black to 19-5-1 on the year with only three regular season games remaining before the start of playoffs.

Consecutive walks and an error in the field put Marshall Black behind the eight ball early in Monday’s doubleheader opener as Willmar was able to take full advantage of the miscues to take a 2-0 lead after two complete.

It wasn’t until the third inning that Marshall Black began to heat up at the plate and would end up scoring its first two runs on an RBI base hit by starting pitcher Charlie Jacobson to tie the game up at two apiece.

The middle-inning surge continued in the fourth when Jack Bly led off and got aboard on a Willmar fielding error before Braden Meyer followed suit with a single to left field. A.J. Toulouse stepped to the plate next and delivered a textbook bunt single to score Bly and give Marshall its first lead of the game at 3-2. Toulouse would later score on a Chase Douglas single to push the lead to 4-2.

After Willmar cut the deficit in half in their next time up, Marshall Black put together its best inning at the plate in the bottom of the fifth with four runs coming across to make it 8-3. The scoring was highlighted by an RBI single for Jacob Hughes.

In the final two innings, Willmar would score three additional runs and threatened to add more in a seventh inning rally before a strikeout by Jaden Pearcy and a pop out to Douglas sealed the victory for Marshall.

In search of a second-consecutive doubleheader sweep, Marshall Black left nothing to chance in their final game of the day with eight runs scored in the first three innings and carried the fast start to a 9-3 victory.

Marshall’s most productive inning came in the bottom of the third inning when Bly drove in the team’s fifth run with a double before Meyer added a sixth run with an RBI base hit. A pair of walks to Wambeke and Felcyn with the bases-loaded extended the lead to 8-0.

After Willmar was able chip away at the lofty deficit with three runs in the top of the fifth and sixth innings, Marshall scored its ninth and final run on an RBI triple by Jaden Pearcy.

Marshall Black will return to Legion Field today when they take on Tracy at 5 p.m. and Luverne at 7 p.m.