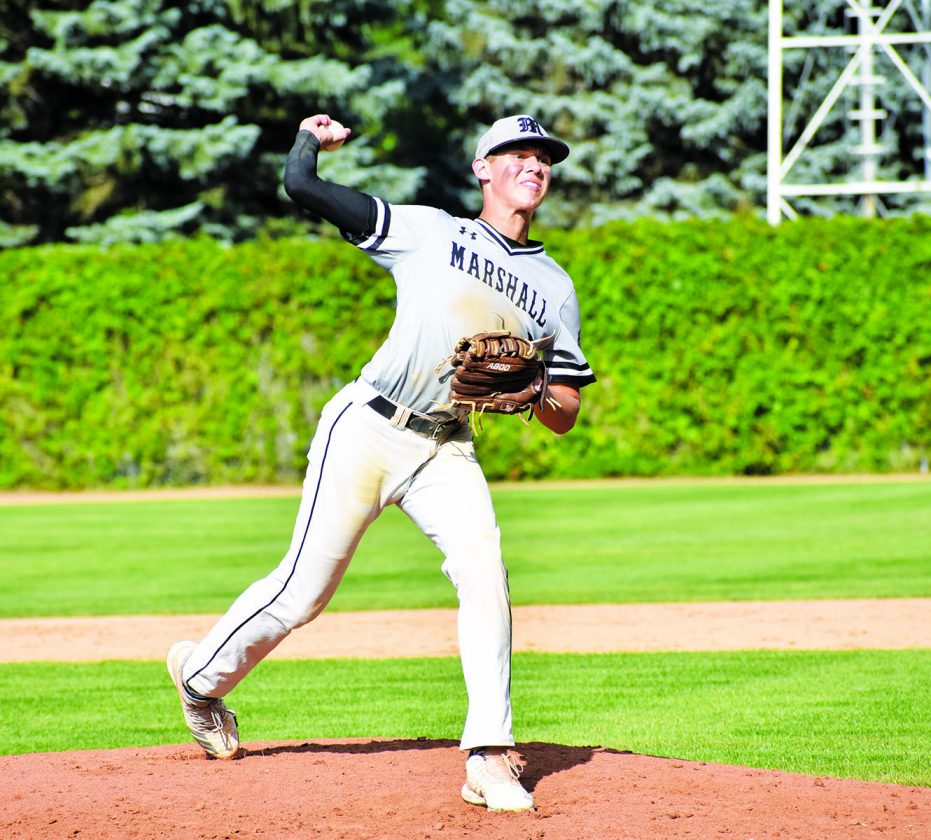 MARSHALL – After a tough loss to New Ulm Gold in the semifinal round of the sub-state tournament, the Marshall Black Junior Legion baseball team showed their resiliency to set up a rematch for a chance to go to state.

Needing a pair of victories in order to punch their ticket, Marshall went toe-to-toe with New Ulm, but a late rally in the bottom of the seventh was just enough to push New Ulm to a 7-6 come-from-behind win on Monday at Legion Field.

With Marshall holding a two-run lead going into the final inning, New Ulm was able to get a pair of baserunners aboard before an RBI single from Cole Ranweiler cut the deficit to one at 6-5. After a hit batter loaded the bases, Ranweiler would get caught in a rundown on a pickoff attempt, but a run scored in the process, tying the game at 6-6.

New Ulm would then draw a couple of walks to fill the bases again before Noah Wilmes was hit by a pitch to bring in the winning run and give New Ulm a walk-off victory.

“We had to play a perfect game and we knew that; they’re (New Ulm) a very good team and we did,” Marshall coach Chace Pollock said. “For 6 and 1/2 innings we played really well and it just didn’t end the way we wanted it to.”

The hard-fought effort and resilient play from both sides was shown right from the opening pitch. After steady rain halted play on Sunday with the score tied at 3-3, the two teams were forced to resume play going into the bottom of the third inning. New Ulm wasted little time getting on the basepaths, as Nolan Drill was hit by a pitch before back-to-back walks from Ranweiler and Cade Bushard loaded the bases with one out. A fielder’s choice by Tony Geiger on the ensuing at-bat would bring in a run to give New Ulm a 4-3 lead.

Despite the quick deficit, Marshall continued to battle and responded in the top half of the fifth, with Josh Baker connecting on a leadoff single before Jaden Pearcy drew a walk and Jacob Hughes reached on a bunt single to give themselves a bases loaded situation of their own with no outs. Marshall capitalized on the next three at-bats, as Chase Douglas and Charlie Jacobson brought in runs on groundouts and Spencer Wambeke smacked an RBI single to put Marshall back in front at 6-4.

Neither side would be able to produce much offense over the next couple of innings, as Marshall’s Baker and New Ulm’s Matt Rieger traded scoreless frames back and forth to set the stage for the final inning.

Pollock said they had multiple chances, especially early on, to create separation from New Ulm, but just couldn’t piece together the necessary plays and it ended up being the difference maker.

Wambeke led the way for Marshall with a 2 for 5 day at the plate with two RBI while Douglas added a hit and two RBI and AJ Toulouse had a pair of hits.

Baker took the loss in relief, going 4 1/3 innings while allowing four runs on two hits and striking out two.

Pollock said he was pleased with Baker’s performance on the mound and he was able to keep New Ulm’s hitters off-balance throughout the majority of the game.

“Josh has really good stuff on the mound and he was able to prove it,” Pollock said. “New Ulm was really struggling to get any hits or barrel up any balls off of him; he went just over four innings and gave up two hits. He’s a good pitcher.”

Marshall Black ends its season with a 24-7-1 record. Pollock said their biggest takeaway is they were able to continue to grow throughout the season against some older competition and put themselves in a good position in the postseason.

“This is a group that’s all 16-year-olds and New Ulm’s all 17-year-olds, so when you look at it that way, we’re playing good competition and that’s what we want to do in order to get better,” Pollock said. “This whole thing is about growing and winning section championships and that’s our goal here, to develop these kids so that can happen.”

Police: Man who died was trying to rob church worker