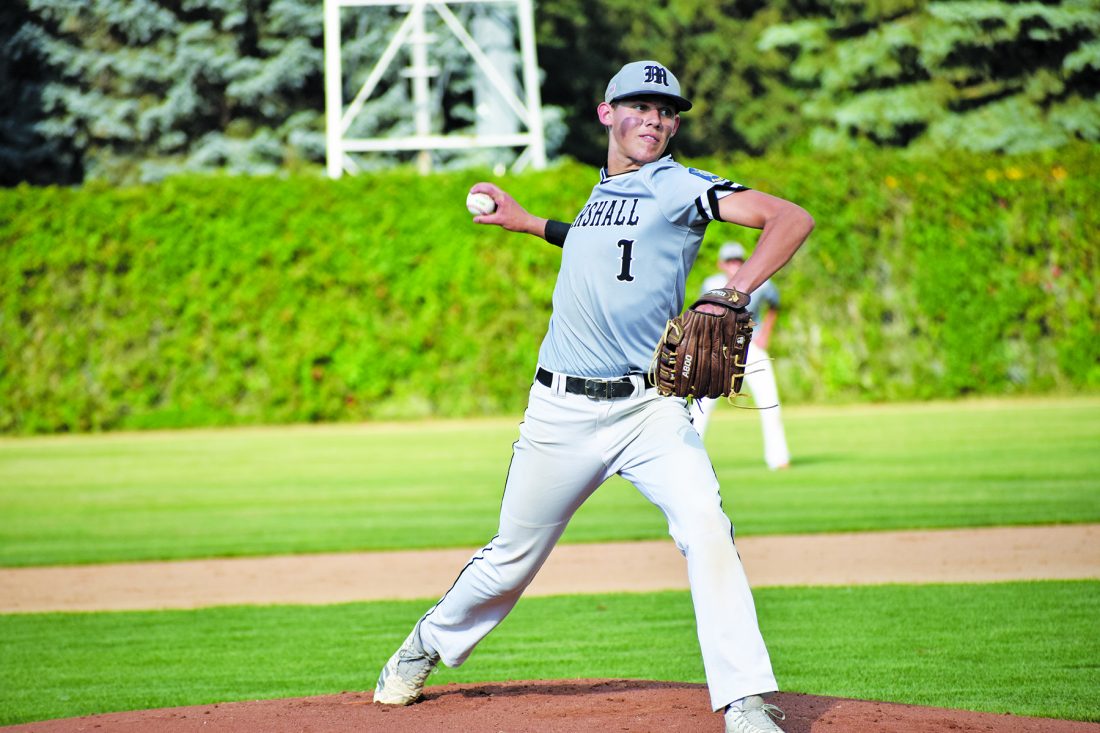 Photo by Jake Przytarski Marshall Black’s Josh Baker winds up for a pitch during Tuesday’s home matchup with Luverne VFW. Marshall would win the game 7-3.

MARSHALL — The Marshall Black Junior Legion baseball team was forced to dig deep in Tuesday’s matchup with Luverne VFW, as a late-rally by the Cardinals in the top of the sixth inning pushed the club to the brink of defeat.

Unfazed, the battle-tested group responded by plating five runs in the latter half of the inning to earn their 20th win of the season in a 7-3 final at Legion Field.

“I thought we played really well,” said Pollock. “Hitting-wise we broke through at the end there in the bottom of the sixth, and you know we had opportunities earlier in the game and just didn’t cash in on them. But that was the difference in the game.”

In the back-and-forth contest, Luverne was able to get the first run across in the top of the first inning on a pair of hits, including a run-scoring double to take an early one-run lead.

In the four innings that followed, Marshall’s starting pitcher Josh Baker kept the Luverne hitters off-balance with an effective mix of pitches to prevent any additional runs.

In the bottom of the second inning, A.J. Toulouse drove in the team’s first run of the game on a line drive single to center field to score Jack Bly. Toulouse would later score the team’s third run in the bottom of the fourth on a hard-hit grounder by Spencer Wambeke that the Luverne shortstop was unable to field cleanly to give Marshall its first lead at 2-1.

The score would hold until the top of the sixth inning when Luverne caught fire at the plate with four hits–including a pair of doubles–to retake the lead at 3-2. A strong play by Charlie Jacobson in right field to hit cutoff man Cole Felcyn before rifling it home for an out prevented a fourth run from being scored.

In need of an answer, the Marshall Black ballclub received it in the bottom of the inning on a five-run rally complete with a pair of triples by Jacob Hughes and Chase Douglas. Wambeke and Felcyn also added run-scoring base hits.

Pollock acknowledged that the team simply knows how to win ballgames after doing it time and time again throughout the season.

“We’re a good ballclub and it showed. We’ve kind of been through it all this summer and these guys have won a lot of baseball games and it shows,” said Pollock. “You can’t really explain it until you’ve been through it and seen teams do it, but when you win a lot and know how to win that’s a fun feeling.”

Marshall Black (20-5-1) will be back in action today at Legion Field when they host Worthington at 6 p.m. Pollock hopes to see another strong performance by his team in order to keep the momentum building into the playoffs.

“Well we play tomorrow against Worthington which will be a big game for us for district seeding and sub-state,” said Pollock. “So we’ll have to play well again tomorrow and keep the momentum going.”