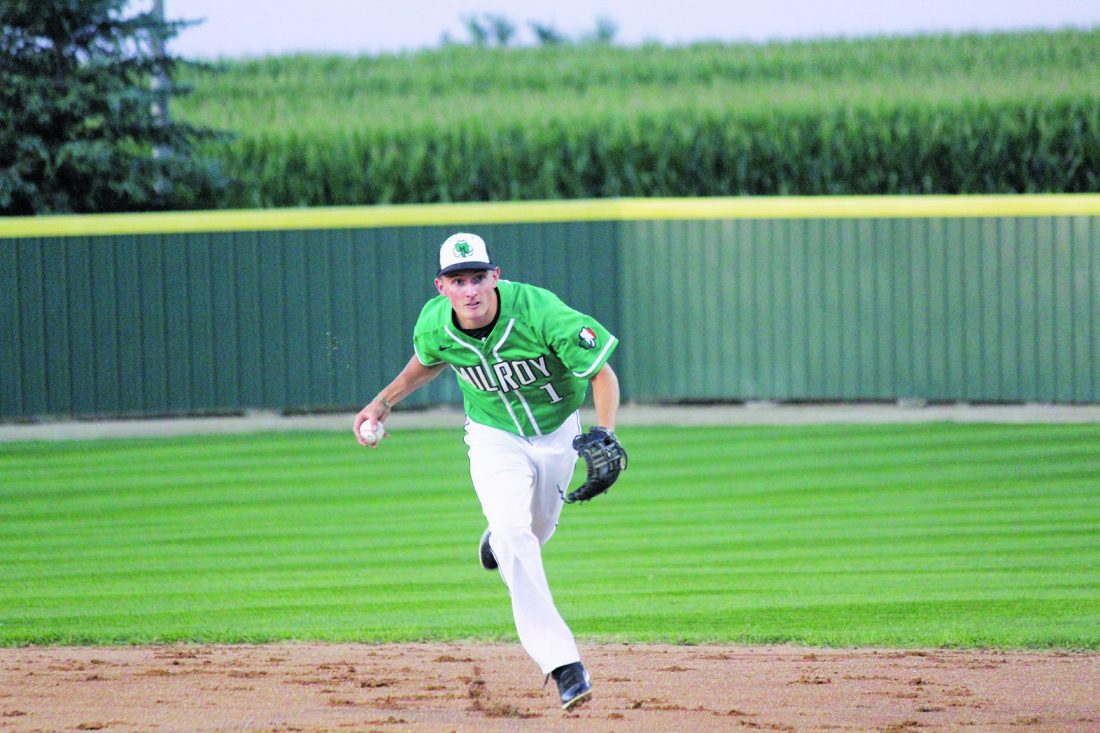 Photo by Jake Przytarski Milroy’s Moses Dolan prepares a throw to first during their game against Lakefield on Monday. The Irish defeated Lakefield 4-1 in Game 3 of their series.

MILROY – The No. 1 seeded Milroy Irish (24-6) took one step closer to a trip to the Class C state tournament on Monday thanks to a series-clinching 4-1 victory over the No. 8 seeded Lakefield Horned Frogs, moving the club into the final four of the Region 13C tournament.

Milroy Irish starting pitcher Tyler Peterson set the tempo in the top of the first inning with his first of seven straight shutout innings on the hill. Peterson would finish the outing with three strikeouts while giving up a total of seven hits.

The early momentum translated in to the batter’s box as the Irish drove in their first run of the game in the latter half of the inning. Brady Lanoue was the first member of the team to record a hit with a two-out double in the frame and later scored on a single by leading-hitter Anthony Dolan to take a 1-0 lead through one complete.

Dolan remained hot at the plate in his second time up in the bottom of the third inning with another RBI base hit to score Peterson who previously reached on an error. Milroy’s final two runs came in the bottom of the fifth on another Lakefield error and a fielder’s choice out by Dolan for his team-leading third RBI.

After Peterson’s seventh and final inning on the mound, Kenny Morris stepped in to close out the game in the top of the eighth and recorded a pair of strikeouts for the team’s eight-consecutive scoreless frame in the field.

The Horned Frogs’ lone run of the game came in their final at-bat in the top of the ninth when their leadoff hitter reached on an error and later scored on a fielder’s choice out. With a runner still on base, Morris ended the game with his third strikeout to give the Irish a 4-1 win.

Next up for the Irish is a three-game series with the No. 4 seeded Fairmont Martins beginning at 7:30 p.m. Wednesday at Irish Yard.

The winner of the three-game series will take on the either the No. 6 seeded Hadley Buttermakers or the No. 2 seeded Luverne Redbirds.