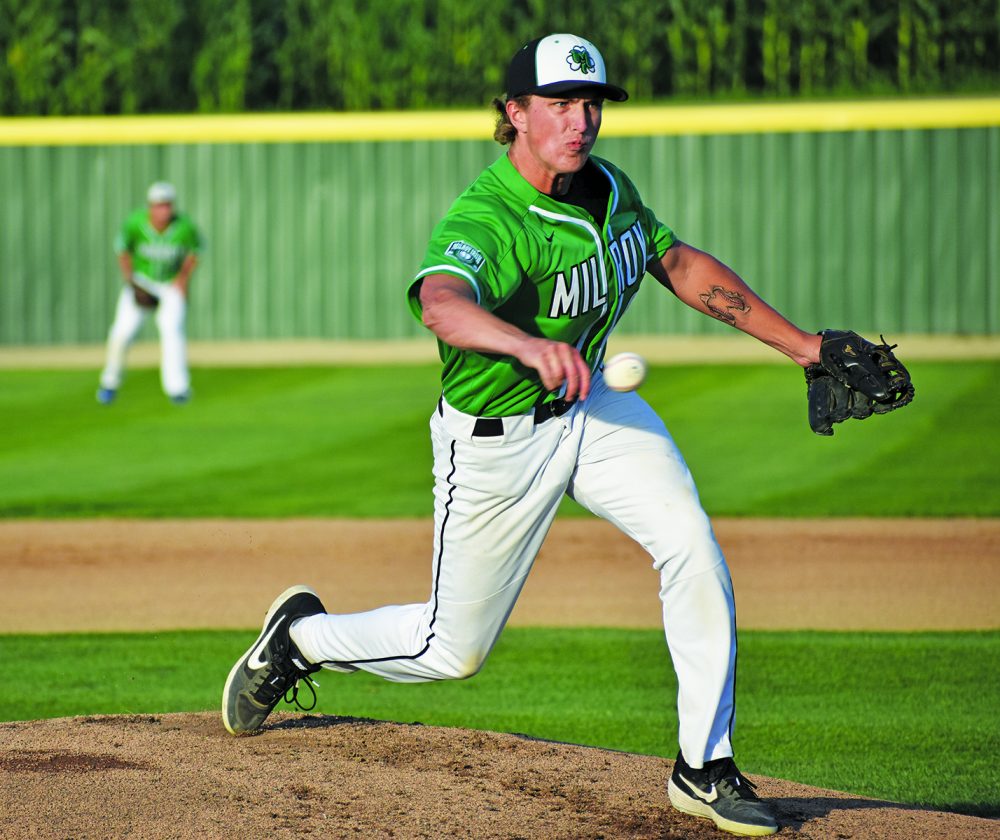 Photo by Sam Thiel Milroy’s Kenny Morris fires a pitch during their game against Lakefield on Wednesday. The Irish defeated the Horned Frogs 9-4 to take a 1-0 lead in their best of three series.

MILROY – After burning through the regular season to the tune of a 22-5 record, the Milroy Irish amateur baseball team came into the Region 13C tournament looking to stay hot in its opening matchup against the Lakefield Horned Frogs.

Thanks to some timely hitting and a solid pitching performance from starter Kenny Morris, the Irish took early command of the best of three series with a 9-4 victory on Wednesday night.

The Irish made a quick statement in the opening frame, as Dominic Dolan reached on an error before Brady Lanoue smacked a line drive over the right field wall for a two-run home run and an early lead for Milroy.

Lakefield would get on the board a couple of innings later, as the Horned Frogs loaded the bases with one out before a sacrifice fly cut the deficit to 2-1 in the top half of the third. Milroy had a response of its own in the bottom of the fourth, as Anthony Dolan connected on a one-out double before a Derek Riley walk and a bunt single from Tyler Patterson loaded the bases for the Irish. Milroy then brought in a run on a wild pitch to make it 3-1.

Not going down without a fight, Lakefield led off the top half of the fifth with a single and a sacrifice bunt to put a runner in scoring position before an RBI double quickly made it a one-run game again. That slim margin wouldn’t last long, however, with the Irish putting together a one-out infield single from Tyler Peterson before Lanoue was hit by a pitch and Jake Plaetz brought in a run on a fielder’s choice to extend Milroy’s lead back to two at 4-2 after five.

The Irish weren’t done there, this time taking advantage with some key two-out hitting as Moses Dolan connected on an RBI single to make it 5-2.

Milroy later added four more runs to its total before holding on for the 9-4 victory.

Isaac Dolan and Lanoue led the way for the Irish with a pair of hits apiece while Lanoue added two RBI and Moses Dolan had a hit and an RBI as well.

Morris earned the victory on the mound, going seven innings while allowing two runs on eight hits and striking out six.