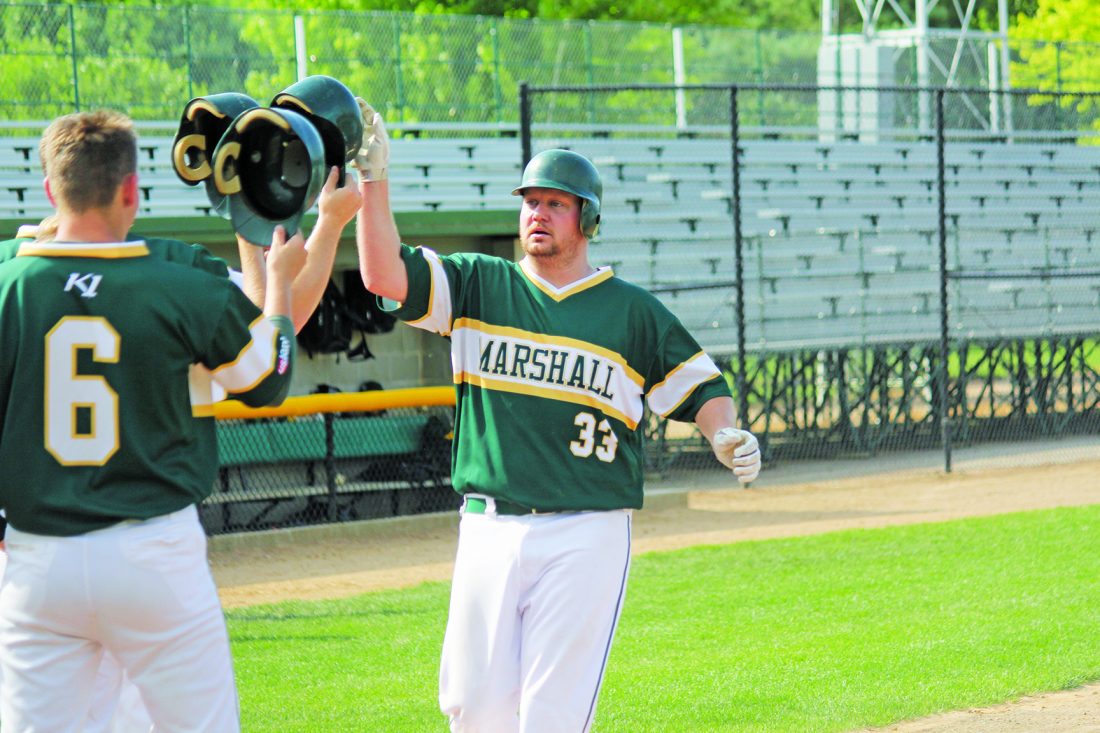 Photo by Jake Przytarski Marshall’s Ryan Schwagel celebrates with teammates at home plate after hitting a grand slam during their game against Raymond on Sunday.

MARSHALL - After last week’s matchup was suspended due to rain in the bottom of the third inning, the Marshall A’s and the Raymond Rockets returned to Legion Field on Sunday to pick up where they left off in a battle between two of the three top teams in the Corn Belt League.

Staying true to their winning formula, the A’s strung together hits in bunches – including a grand slam by manager Ryan Schwagel – to handily defeat the Rockets 14-4 in seven innings. The win moves the A’s to 11-2 overall this season and 8-1 in Corn Belt League play.

According to Schwagel, the team’s success at the plate is nothing new as it’s been a main contributor to their victories all season long.

“(It’s the) same story all year for us, we’ve been hitting the ball and scoring runs. Good things happen when you throw strikes and put the ball in play,” said Schwagel. “We just put pressure on them every inning and scored every inning so we’re feeling pretty good after this win.”

The scoring spree for the A’s began in the bottom of the fourth inning when Jordon Kontz led off with a single and later rounded third to score the team’s first run on an RBI base hit by Schwagel. Barry Meyer stepped to the plate next and kept the runs coming with an RBI single of his own to make it 2-0 after four complete.

After a momentum-building frame on the mound for Logan Tomasek, the A’s added five runs to their lead in the latter half of the fifth inning thanks to a two-out RBI single by Alex Thompson and a grand slam by Schwagel to make it 7-0 after five innings.

Down but not out, the Rockets went to work in the top of the sixth inning and scored all four of their runs on three hits and an error in the field by the A’s. Marshall responded by posting a crooked number of their own later in the inning as Olson and Thompson continued to swing a hot bat with a run-scoring double and single respectively to push the lead to 10-4.

The A’s put the Rockets away for good in the bottom of the seventh inning when Tomasek led off with a walk and Nick Macchio belted a single to put runners on first and second. Both runners would score after an error advanced them into scoring position and another brought them home. Olson and Thompson concluded the scoring with a pair of RBI singles that pushed the lead to 10 and ended the game at 14-4.

The A’s will now have a week to rest before returning to the field on Sunday when they travel to Granite Falls to take on the Kilowatts at 1:30 p.m. Looking ahead, Schwagel simply wants the club to continue doing what’s made them so successful this season.

“We’ve got a little break for the Fourth of July here, but we just have to keep hitting and doing the same things we’ve been doing all year,” said Schwagel. “Put the ball in play and good things happen.”