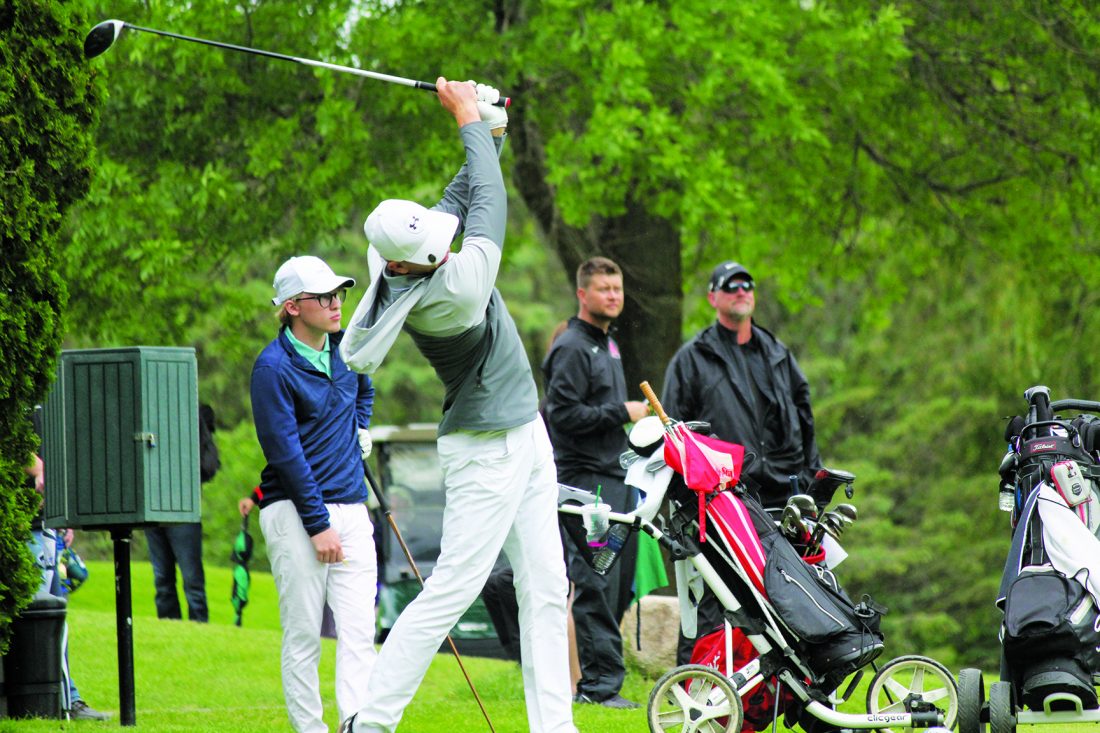 Photo by Jake Przytarski MCC’s Jack Pierson hits a tee shot during the Class A Championships at Pebble Creek Golf Club in Becker on Tuesday.

BECKER – Southwest Minnesota was well-represented at the Class A State Golf Meet on Tuesday at Pebble Creek Golf Club, with plenty of talented returning golfers and newcomers putting their best foot forward on Day 1 of the two-day tournament.

Among the long list of familiar faces on the boys side of the competition were Westbrook-Walnut Grove senior Andrew Quade, Murray County Central senior Jack Pierson and Canby junior Jake Wagner.

All three golfers fared well in the opening round, as Quade and Pierson finished the day tied for 11th place with a score of 80. Wagner trails both golfers by a stroke with a 9-over 81 and is in a four-way tie for 14th place.

Quade and Wagner both acknowledged that their past experience with the course helped tremendously in knowing what to expect.

“It’s just huge. Just knowing the course and knowing what clubs to hit,” said Quade. “You’re not going to want to hit driver on every par 4 and just knowing your yardages and trusting your clubs.”

Wagner pointed to the lack of nerves this time around as the key to his strong ball-striking for the round.

“The nerves were down going into this year,” said Wagner. “I was a lot more relaxed which definitely helped I think in my ball striking.”

Minneota junior Nolan Boerboom is another on the long list of those making the repeat trip to state after participating in his freshman and sophomore seasons. Boerboom is off to a strong start in this year’s meet as well, carding an 83 and currently ranks 21st on the leaderboard.

Though Boerboom acknowledged the benefits of having played this course, he admitted that even that doesn’t guarantee anything when it comes time to play.

“It helps you know where you can and where you can’t miss. But I mean you can avoid certain spots yet and end up there anyways,” said Boerboom.

Rounding out the rest of the boys scores, Yellow Medicine East’s Sam Ohliger finished one stroke ahead of Lakeview’s Aaron Loe with a 22-over 94. MCC’s Cole Ahlers ended the day with a 99, while Minneota’s Cole Myhre carded a 102.

For a second consecutive year, the MCC girls golf team made the trek to Becker to compete in the deeply talented field of nine teams and ended the day in seventh-place shooting 109 over par.

Rebels Coach Kim DeLong was pleased with the performance of her team and expects them to be motivated to put together an even better score on day two.

“I think they did well. We’re up here for a second year and the girls know the course,” said DeLong. “We got in a little bit of trouble with the bunkers. Putting was fast, the greens were fast, but overall, we shot about our average. Abby did really well today, and I know they’re coming back tomorrow and (want to) improve scores as well.”

The Rebels were led by junior Abby Hamman, who currently sits at a three-way tie for third place with a score of 83. Hamman admitted that she struggled at times with the speed of the greens and plans to spend more time practicing on the putting greens prior to her round today instead of the range.

“The greens are rolling pretty fast so I’m going to focus on that tomorrow,” said Hamman. “I’m going to spend more time tomorrow on the putting green and probably not as much time on the range.”

In addition to the MCC team making the trip, three individual golfers qualified for the event, including Dawson-Boyd’s Ella Mork and Rachael Lund, as well as WWG’s Brittany Erickson.

Through the first day of competition, Mork ranks 13th on the leaderboard with a score of 89, while Lund ended the day with a 97 and Erickson a 104.

Erickson says she saw a lot of similarities between the greens at Pebble Creek and the section golf course in Worthington, which allowed her to have a smooth transition with her putting.

“I think they’re very comparable to Worthington where we have golf for sections,” said Erickson. “So overall with the speed of that I didn’t find it a struggle to transition from back and forth. I thought it was a pretty easy transition to here.”

The greens didn’t provide any problems for Lund, either, who said it was her long-game that caused some problems early for her.

“My first nine I kind of struggled a little bit with my long-game but I picked it up on the second nine and shot a 43 so I’m feeling pretty good,” said Lund.

Lund added that the experience of having followed her brother Tyler on the course the past three years was very helpful in her first time competing at state.

“I’ve followed my brother Tyler Lund the past few years and so I’ve seen the course a few times and I’m pretty comfortable with it,” said Lund.

The final day of competition is set to begin today at 7:30 a.m.