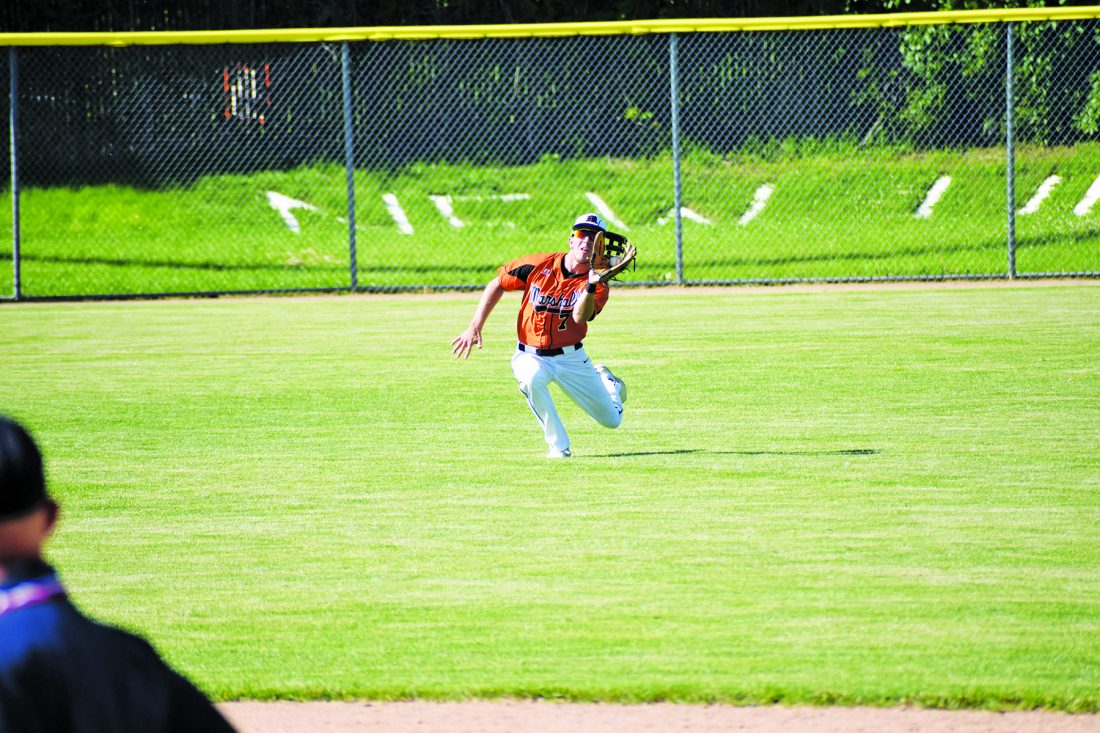 NEW ULM — The Marshall baseball team has been put to the test on multiple occasions throughout this season. The Tigers have been able to find a way to win, whether it’s in bounce-back fashion after a tough loss or creating a string of signature victories.

With their backs against the wall on Thursday, the Tigers delivered when they needed to most. Not once, but twice.

No. 4-seeded Marshall used a combination of solid defense, efficient offense and stifling pitching performances to highlight a 6-1 victory over Mankato East in the Section 2AAA semifinals before keeping Hutchinson at bay 6-2 in the first game of the section title game on Thursday at Johnson Park in New Ulm.

Marshall coach Chace Pollock said he’s extremely proud of the way his team continues to show their fight and resiliency, especially the last few games in the consolation bracket.

“You couldn’t ask for anything else,” Pollock said. “From the position that we were put in in the (consolation) bracket and coming back all the way through and now have a chance to punch our ticket, it’s awesome and fun to think about. I’m really proud of the guys.”

With the win, Marshall will play Hutchinson in a winner-take-all game today at 1 p.m. at Johnson Park in New Ulm.

With a section championship and a trip to the state tournament on the line, Pollock said they’re looking forward to the challenge and knows they will come ready to play.

“It’s just fun to think about and fun to think that we’re in this position and it tells us a lot about what we’ve got,” Pollock said. “We’ve got a lot of heart and a lot of kids that aren’t rolling over, so we’re excited to get back out here and see what happens.”

Unlike its game earlier in the day, Marshall came out of the gates red-hot against Hutchinson, as Cody Greve and Isaac Schmitt drew one-out walks before Kaleb Welvaert reached on a walk of his own to load the bases.

Andrew Mulso then stepped up and connected on an infield single that plated two runs on an error on the throw to give Marshall a 2-0 lead, before Jordan Mernaugh and Matt Hmielewski added to the offense with back-to-back RBI singles to extend Marshall’s advantage to 4-0 after a half-inning of play.

Schmitt said it’s a relief to go out on the mound with a nice offensive inning in their back pockets and helps boost their confidence as a pitcher.

“That’s a pitcher’s dream to come out there in the bottom of the first with four runs or even one run,” Schmitt said. “Any run support helps pitching confidence-wise.”

After a scoreless second, Marshall picked back up where it left off in the third, as Hmielewski connected on his second RBI base hit of the game to push Marshall’s lead to 5-0.

Hutchinson wouldn’t go down without a fight, though, as they loaded the bases in the bottom half of the fourth before getting two runs across on a fielder’s choice and an RBI single to cut the deficit to 5-2 after four innings.

That would be the closest Hutchinson got, however, as Marshall’s pitchers only allowed one Hutchinson baserunner the rest of the way. Marshall added a run in the top half of the seventh on an RBI double by Schmitt, and Jack Bly capped off his three-inning victory in relief with a 1-2-3 inning to force one last game against Hutchinson.

Hmielewski led the way for Marshall with a 2 for 3 day at the plate with two RBI while Greve added a pair of hits and Mernaugh and Schmitt each added a hit and an RBI.

“We calmed down and were able to find ourselves and our identity,” Pollock said. “All of the guys did a nice job, they threw strikes and gave us a chance to win, you can’t ask for much more from all of the guys that got on the mound.”

The Tigers and Cougars were able to get an inning of their elimination game in on Tuesday evening before Mother Nature intervened and suspended play until Thursday. Neither team could find the scoring right away, as Schmitt and Mankato East’s Jack Clifford were deadlocked in an early pitcher’s duel.

Marshall had the first chance to strike in the bottom of the fourth, as Greve connected on a single before Schmitt drew a walk and Nick Macchio reached to load the bases with no outs. The Tigers were then able to capitalize on an RBI sacrifice fly from Mulso before a double steal brought in another run and make it 2-0.

Mankato East had an opportunity of its own in the next half-inning, getting runners on the corners, but a flyout ended the threat for the Cougars. Marshall wasted little time in responding, using a leadoff walk from Jackson Hughes and a hit by pitch from Riley Alcorn to put runners on first and second. After a balk advanced both Tigers up a base, Alex Thompson would bring in a run on a sacrifice fly to extend Marshall’s lead to 3-0 after five.

Marshall continued to use its patience at the plate in the next inning to its advantage, as Macchio was hit by a pitch and Mulso reached on an error before the Tigers drew four walks from Hmielewski, Hughes, Thompson and Greve to score three runs and make it 6-0.

The Cougars were able to break onto the scoreboard in the top of the seventh on an error, but relief pitcher Logan Terfehr quickly shut down any further comeback hopes for Mankato East to seal a spot in the championship game for the Tigers.

Schmitt earned the win on the mound in relief, going five innings while allowing no runs on three hits and striking out three.

Greve and Thompson led the way offensively for the Tigers with a hit apiece.