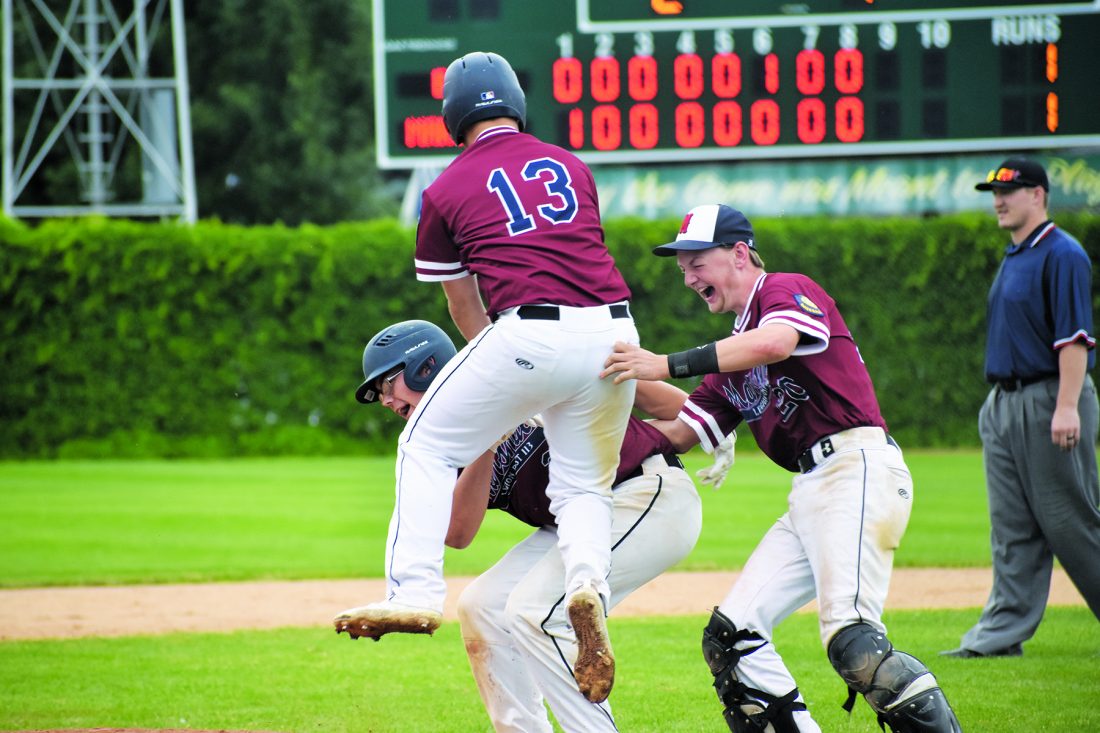 Photo by Sam Thiel Marshall’s Jordan Mernaugh (13) and Riley Alcorn (20) celebrate with Isaac Schmitt after he hit a game-winning single during their game against BOLD at the Wood Bat Classic on Saturday. The Mudcats won all of their games on the weekend to take first place.

MARSHALL – The Marshall Legion baseball team wanted to get its season started on the right foot during their home tournament. In a display of tight, gritty play – and some late-inning magic – the Mudcats are pointed in the winning direction after sweeping their weekend games to take first place at the 19th annual Wood Bat Classic.

Marshall defeated Albany 4-3 and BOLD 2-1 in eight innings, both on walk-off base hits, on Saturday before closing the tournament with a 2-0 victory over Willmar on Sunday.

Marshall coach Mitch Maxwell said the seniors did a great job of answering the call when they needed to and that everyone followed in their footsteps as the weekend went on.

“I think all weekend our seniors have been asked to step to the plate and I think they’ve answered that call, so hats off to them,” Maxwell said. “I think with the rest of the group, the seniors set the leadership and the example and then everybody else follows suit, so I think that we did a nice job up and down the lineup and in our dugout with our responsibilities for the entire weekend.”

Going into their next set of games, Maxwell said their biggest takeaway is to continue to play as a team and do their jobs when needed.

“We need to continue to play as a team and continue to be cohesive and have guys step to the plate when asked and do their jobs,” Maxwell said. “Just take care of ourselves.”

After walking away with a pair of close wins in pool play on Saturday, Marshall earned a spot in the championship game on Sunday against Willmar. The Mudcats quickly got out to a solid start on offense, as Matt Hmielewski led things off with a single before Isaac Schmitt drew a walk and Kaleb Welvaert connected on an RBI single to give Marshall a 1-0 advantage in the first inning.

Both teams would have opportunities to break onto the scoreboard over the next few innings, but solid pitching and some great defensive plays kept the run-scoring department closed. Willmar loaded the bases in the second and fourth, but Marshall starter Cody Greve and reliever Hmielewski quickly ended the scoring threat.

Willmar also had a chance in the third with a couple of hits, but great throws from Hmielewski and Welvaert and a quick tag by Nick Macchio kept them from tying things up.

Marshall would load the bases in the bottom of the third, but a fielder’s choice and a flyout halted the Mudcats from extending their lead.

Greve, who went 3 2/3 innings and held Willmar scoreless and to just five hits in his first start of the year, said he tried to keep it low in the strike zone and force Willmar to hit into ground balls.

“I worked on my fastball and tried to keep it low in the zone and force ground balls and let my defense work behind me,” Greve said.

Maxwell added that Greve did a nice job of putting his team in a position to win and was able to respond when he was put in challenging situations on the mound.

“We asked Cody to come in to pitch and he hadn’t thrown at all this spring or summer and he came in and did a really nice job and put us in a position to win,” Maxwell said. “Last summer, Cody was able to throw a little bit and we’ve seen flashes of what he’s capable of. Last year in the Upper Midwest Classic against Wayzata, he had one bad inning but otherwise he shut those guys out for six innings. Same thing here, it was a little bit of a challenge at times but he answered the call, established the fastball, threw the spinner when he had to, so he did a nice job.”

Despite not capitalizing on its scoring chance in the third, Marshall made it count in the next inning, as Jackson Hughes reached on a bunt single and Hmielewski drew a walk before Greve lined a single that plated a run and pushed the Mudcats’ lead to 2-0.

Willmar had one final chance to get on the board in the top of the seventh, but Marshall was able to withstand a one-out triple and a pair of walks to cap off the shutout victory and the first-place finish.

Hmielewski earned the victory in relief, tossing the final 3 1/3 innings while allowing no runs on two hits and striking out three.

Greve and Welvaert led the way offensively with a hit and an RBI each while Hmielewski, Riley Alcorn and Hughes all added a hit.

Unlike their season-opening 7-3 victory over the Minneapolis Lakers, offense was at a premium in the beginning stages for the Mudcats against Albany to start Saturday play.

In a back-and-forth affair, both teams would find themselves going down to the wire.

Trailing by a run, the Mudcats headed to their final at-bat in search of a spark. Marshall would begin its rally with a one-out single from Hmielewski before he stole second to get into scoring position. Greve then stepped to the plate and connected on an RBI single to tie things up at 3-3. After Greve stole second and Schmitt drew a walk, Macchio advanced Greve on a fielder’s choice to put runners on the corners. With the winning run just 90 feet away, Welvaert would come up with the late stage heroics, smacking a single to left for the walk-off base hit and propel Marshall to the come-from-behind victory.

“I think we were just grinding out at-bats and everyone was trying to get on base,” Welvaert said. “I tried to draw the walk there towards the end, a lot of the guys tried to grind out their at-bats into that walk but we were able to pull through late and get the win.”

Welvaert also earned the victory on the mound, going six innings while allowing two runs on seven hits and striking out five.

Maxwell said Welvaert did a nice job of attacking the strike zone and limiting his pitch count with his ability to change speeds and hit his spots.

“Kaleb’s consistent; when you watch him pitch, you know Kaleb’s able to hit his spots when you look at his pitch count. He’s a guy who throws a lot of strikes and when he’s on, he’s typically in the fifth or sixth inning and he’s thrown 50 or 60 pitches,” Maxwell said. “I thought that was good to see him in that position, he got a little tired late, but I think his ability to change speeds is his strength and he did that well for six innings.”

The Mudcats were able to jump out to an early lead, as Peyton Grant reached on an error and Brayden Hilgemann drew a walk before Hmielewski connected on a single that brought in both baserunners for a 2-0 advantage after two innings.

Albany wouldn’t go down without a fight, though, using a leadoff walk and back-to-back singles to load the bases with no outs before getting a pair of runs on a double play and an RBI single to tie things up at 2-2 in the top of the sixth.

Marshall had a chance of its own in the bottom of the frame, with Schmitt, Macchio and Jordan Mernaugh all reaching to load the bases with one out, but a flyout and a fielder’s choice ended the scoring opportunity for the Mudcats and kept things tied going into the final inning.

Looking to continue its momentum, Albany opened the top half of the seventh with another leadoff walk and a couple of singles to load the bases with no outs before getting an RBI single to take a 3-2 lead and setting the stage for the final at-bat for the Mudcats.

Hmielewski led the way offensively for Marshall with a 2 for 4 day at the plate with two RBI while Greve and Welvaert each added a hit and an RBI.

The Mudcats knew things weren’t going to be easy in their second game of the day, especially against a BOLD team that was just two days removed from a state championship in the Class A tournament.

In another tight, low-scoring outcome, the game would be have to be decided in extra innings. With the score deadlocked at 1-1 in the eighth inning, BOLD had an opportunity to break through on offense with a runner in scoring position, but couldn’t capitalize with a flyout to end their at-bat. In the bottom half of the frame, Marshall found itself with a chance of their own to come away with a second consecutive victory on the afternoon.

After the senior Greve battled his way aboard with a two-out walk and stole second to get into scoring position, Schmitt stepped up looking to send his team home with a win. The senior first baseman drew the count to 2-1 before connecting on a line drive to left, and Greve sprinted around third to score on the play and help the Mudcats cap off another heart-pounding victory.

Schmitt said they did a good job of battling out their at-bats and being able to move baserunners around.

“We just battled out at-bats and had to make the pitcher work,” Schmitt said. “We also played small ball and got guys on base, got them over and got them in.”

Maxwell credited BOLD for fighting and making it a close game, but was proud of the way his team answered the challenge he set for them, particularly the seniors.

“Our games with BOLD tend to be a one-run game since we started playing with them a couple of summers ago. They’ve got a heck of a program, great kids, hats off to them for coming to our tournament after winning the state championship on Thursday,” Maxwell said. “Before this game, I challenged our seniors to be leaders for our team. You look at what happened, having an early start and getting everything put together and our seniors truly were leaders. For Isaac to get that game-winning hit, it kind of put an exclamation point on that.”

Just like it did against Albany, Marshall got a quick lead, capitalizing on a one-out walk from Greve with an RBI double by Schmitt to take a 1-0 advantage after an inning of play.

That slim lead appeared to be just enough for the Mudcats, despite BOLD’s numerous chances to tie or take the lead. But BOLD continued to put baserunners aboard and would finally take advantage in the top of the sixth by getting a sacrifice fly to tie things up at one run apiece.

After neither side could bring in baserunners in the seventh, the two teams headed to extras and set the stage for another round of game-winning dramatics for the Mudcats.

Schmitt led the way offensively with a 2 for 4 day at the plate with two RBI while Mernaugh added a hit.

Mernaugh earned the win in relief, going three innings while allowing no runs on three hits.

Marshall (4-0) will face Luverne on Thursday, beginning at 5 p.m.