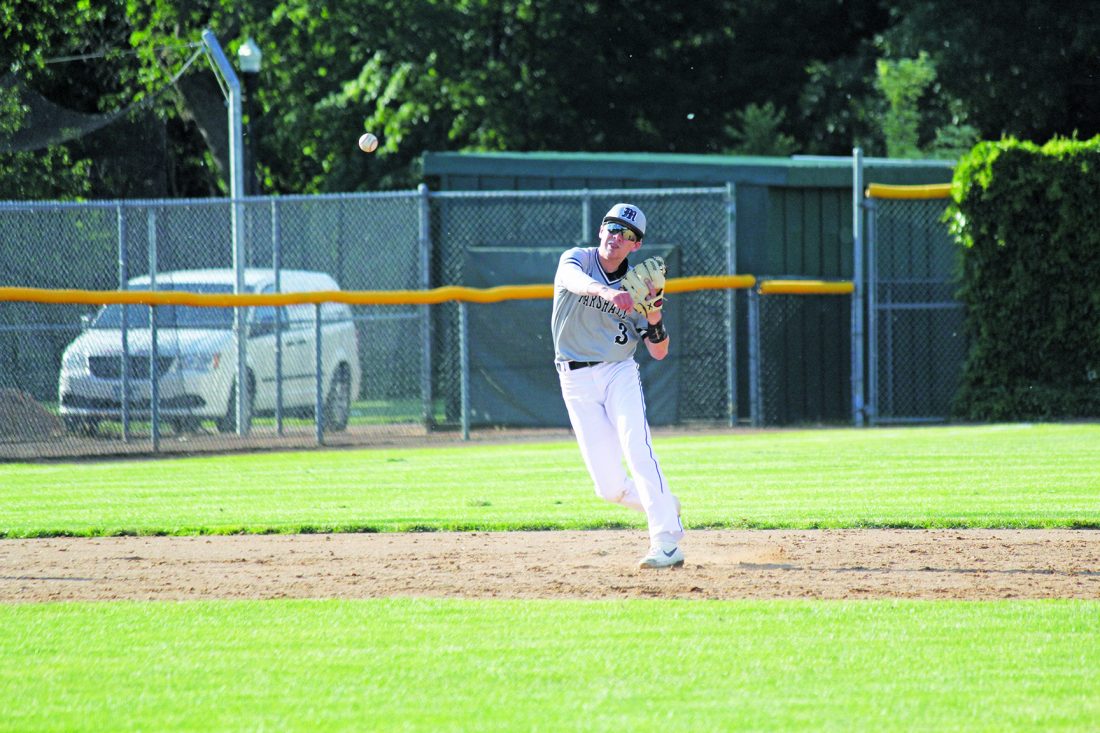 MARSHALL – The Marshall Junior Legion Black baseball team’s offense was firing on all cylinders in Monday’s home matchup with Pipestone as eight different Marshall players picked up hits in a 17-11 victory over the Arrows.

Though the group struggled at times in the field, coach Chace Pollock lauded the team for their effort at the plate.

“I thought we hit the ball really well, on a bonus that was fun to watch us hit,” said Pollock. “Defensively we made a lot of mistakes and we have to be better. Sort of a sloppy game defensively but I’m proud of the way we hit.”

Marshall was forced to play catch-up after two innings of play with Pipestone breaking through with one run in the second inning and another in the third to take a 2-0 lead after two and a half innings.

The fast start for Pipestone was aided by missed plays in the field with players out of position, according to Pollock.

“You know we were out of position sometimes out there and felt like we could’ve been in the right spots, and we’re learning as we go so I’m proud of the fellas for making adjustments after that,” said Pollock. “If we’re in the right spots and covering the right bases then we’re okay but we weren’t early and we learned the hard way.”

After being held without a hit in their first two times up to the plate, the bats came alive in the bottom of the third for Marshall and stayed hot for the remainder of the game beginning with a leadoff single for Spencer Wambeke, followed by another base hit by Jacob Hughes to put runners on first and second base.

Connecting on his first of a team-leading three hits, Cole Felcyn stepped into the batter’s box for a second time and drove both runners home with a deep triple. Felcyn would later score the team’s third run on a grounder by Braden Meyer for his first of a game-high four RBIs to make it 3-2 Marshall after three full innings.

Marshall’s starting pitcher Felcyn kept the momentum going with a strong frame on the mound in the top of the fourth that the club would then feed off of in their next time up with six runs coming across on four hits.

The offensive onslaught began with a leadoff double by Spencer Wambeke and continued with the next three Marshall batters reaching base on walks. With the bases loaded and no outs, Brock Schultz drove in the fourth run with a single to score Wambeke and extend the lead to a pair of runs.

Far from finished, Josh Baker kept the rally going with an RBI single of his own to make it 6-2 following a bases-loaded walk to Meyer. Noah Blomme went on to drive in the team’s seventh run with a sacrifice fly to left field to score Schultz. Jaden Pearcy closed out the inning with two more runs on a line drive single to score Meyer and Baker that extended the lead to 9-2.

Marshall appeared to be in the driver’s seat after the big inning, but Pipestone kept battling in their next two times up with nine runs coming across to Marshall’s one, that cut the lead to a single run heading into the bottom of the sixth.

In need of some insurance runs, A.J. Toulouse got the inning started with his first of two base hits on the day and went on to score three batters later on a ground ball single by Jacob Hughes. Felcyn kept the offense rolling with an RBI single in the ensuing at-bat and went on to be waved home with Hughes on a line drive single from Meyer to make it 14-9.

After making it through the order, Toulouse returned to the plate with the bases loaded and delivered again with a two-RBI single to score the 16th run. A passed ball during Pearcy’s at-bat to follow scored the team’s 17th run to make it 17-9 heading into the top of the seventh.

To close out the contest, Pearcy took over for Felcyn on the mound and retired the first two Pipestone batters before a two-out rally scored their final two runs. Pearcy went on to prevent any further damage by recording the final out leaving two runners stranded.

With the win, Marshall moves to 6-2 on the season, and will return to action on Thursday when they take on the Marshall 16U Orange team at 6 p.m. On Friday, the team will be back on the field for their first game of the Marshall Junior Legion Tournament that will continue into Sunday.