CLASS A TRACK AND FIELD: A strong finish 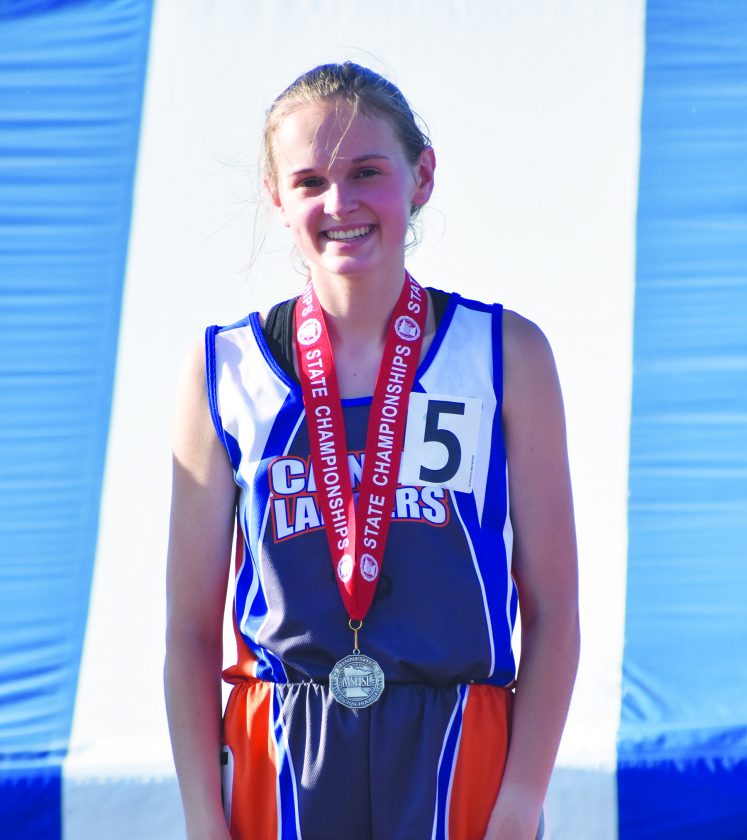 Photo by Sam Thiel Canby/Minneota’s Grace Drietz stands on the podium after placing second in the 800 meters at the Class A championships on Saturday at Hamline University.

ST. PAUL – Grace Drietz came into the Class A track and field championships with one goal in mind: to set a new career-best.

“I just wanted to do my best and try my hardest,” Drietz said. “I really wanted to beat my PR’s from this year and I did that, so I’m proud of that.”

“It feels great,” she said of her placements. “I was not expecting that so I’m glad I got to do it.”

Going into next season, Drietz just kept it simple with what she’ll be focusing on.

“To push myself and just to have fun,” she said.

Drietz wasn’t the only area athlete to come away with some hardware on Day 2. Drietz’s teammate Carter Wente also earned a medal, placing sixth in the 110-meter hurdles with a time of 15.82 seconds. While he was a little disappointed with his overall finish, he was pleased to be able to place and get a medal to close out his career.

“It feels good to finally have some hardware after competing in this event for three years,” Wente said. “I didn’t do as good as I had hoped to do, but it is what it is and I’ll be continuing track in college, so it’ll go up from here and I’ll work hard in this offseason to get better and be ready for next year in college.”

Murray County Central’s Aaron Johnson also ran in the 110 hurdles, placing seventh with a time of 16.05 seconds. He said he was honored to be able to compete with some of the best in the state after narrowily missing on a trip to Hamline a season ago.

“I feel very honored,” Johnson said. “Last year I was 0.15 (seconds) away from the qualifying time at sections, so it means a lot to me that I’m here and get to compete with the best in Minnesota, so I’m very happy to be here. It’s an amazing experience.”

Johnson, who qualified for Saturday’s final by just a hundreth of a second, knew his first trip to the state meet was going to come with some nerves, but said he felt more comfortable in his second outing in the event.

“I knew I would be a little jittery and nervous but more excited for it,” Johnson said. “(Friday) I was definitely more nervous getting on the track for the first time but here I was a lot more comfortable.”

Sather said it was a great experience and it was nice to have the support of his teammate alongside him throughout the weekend.

“It was really cool,” Sather said. “It’s awesome to have a teammate down with you just so you know where you’re at and somebody that is there to help support you as you can.”