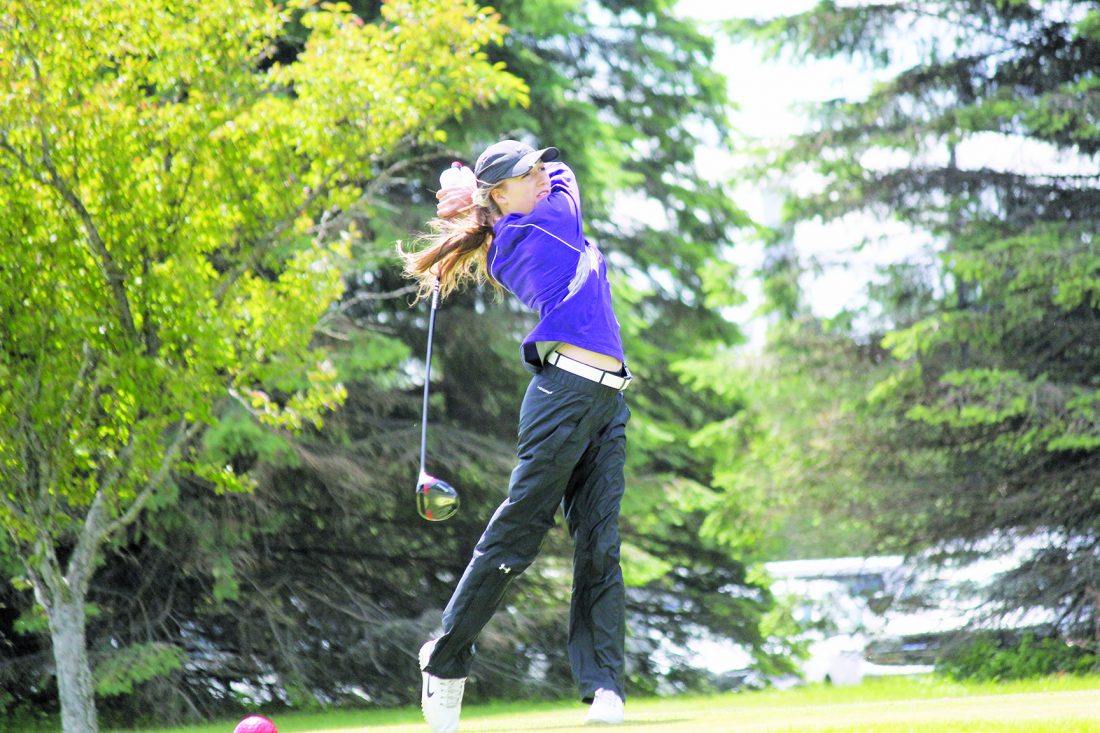 Photo by Jake Przytarski MCC’s Abby Hamman hits a tee shot during the Class A tournament on Wednesday at Pebble Creek Golf Club in Becker.

BECKER — With the high school golf season down to one final round, the area athletes participating in Day 2 of the Class A state meet hoped to make the most of the experience, and perhaps even return home with some hardware in the form of a medal by day’s end.

For Murray County Central’s Jack Pierson and Abby Hamman, both goals were met, as Pierson matched his opening day score of 80 to finish seventh, while Hamman ended the day with a final round score of 83 to earn a fourth-place finish.

Upon completing the round, Pierson thought he may not have done enough to earn a medal but was happy with the way he performed.

“I started off really rough and then I played like my last 13 holes one-over, so I finished well,” said Pierson. “(I’m) probably going to just miss medaling. It’s tough, but I like the way I finished.”

The state golf meet marked the second state tournament in which Quade has qualified for during his senior season as he was also a key contributor on the Chargers basketball team at point guard.

Quade says he’s thankful for the experience of being able to participate in both events.

“It’s crazy fun, I mean high school athletics is just a thing that I think everybody should encounter in their life,” said Quade. “It’s just a great experience for everyone.”

Originally a baseball player, Quade made the switch to golf two and a half years ago. When asked whether he anticipated getting to this point, he jokingly reminisced about some of the not-so-great moments of trying to get acclimated to the sport.

“No absolutely not, because I remember going into the gym my sophomore year trying to hit into some nets and everything was a slice,” said Quade. So, it’s come a long way.”

Other area boys golfers putting together strong finishes on Day 2 were Yellow Medicine East’s Sam Ohliger, Aaron Loe of Lakeview, Cole Ahlers of MCC and Cole Myhre of Minneota. Ohliger finished with a two-day total of 183 (94-89), while Loe and Ahlers were separated by a single stroke with scores of 189 (95-94) and 190 (99-91). Myhre shaved off eight strokes from his Day 1 total to end the meet with an overall score of 196 (102-94).

On the girls side, the lone team representing the area, MCC, finished fifth of the seven teams, finishing 224 strokes over par. The Rebels were led by Hamman, who put together back-to-back rounds of 83 for a two-day total of 186. Sophomore Amber Boock finished with an overall score of 209 (103-106), and Vanessa Dahlgren finished just behind her with a 211 (106-105).

Individually, three area girls completed their final round of the season, including WWG’s Brittany Erickson, who finished in 67th place with a two-day total of 216 (104-112). Dawson-Boyd’s Rachael Lund and Ella Mork finished neck-and-neck with only one stroke separating the two. Lund placed in a three-way tie for 20th place with an overall score of 185 (97-88), while Mork finished 23rd (89-97).