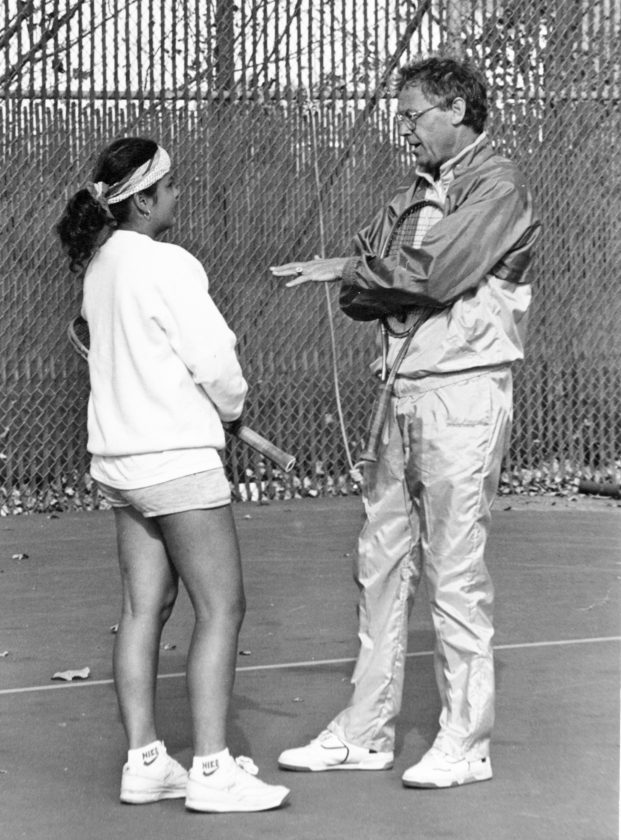 MARSHALL – Hugh Curtler has been around the game of tennis for a long time.

He’s been a certified USPTA pro for more than 30 years and had a legendary college coaching career that spanned more than a decade here in Marshall.

Tonight, Curtler will have something else to add to that list, as he will be inducted into the United States Tennis Association Northern Section Hall of Fame at the Nicollet Island Pavilion in Minneapolis.

Curtler said he was completely surprised that he was going to be inducted.

“I was very surprised,” Curtler said. “I knew I was nominated but I thought the odds were very long. I didn’t think it was going to happen.”

Curtler will join a Hall of Fame that currently holds 106 members. Every year, USTA Northern honors individuals and organizations that have demonstrated outstanding commitment to the growth and development of tennis with various sectional awards. The USTA Northern Hall of Fame, which started in 1979, is housed at the Fred Wells Tennis and Education Center in St. Paul.

USTA Northern Executive Director Becky Cantellano praised Curtler’s accomplishments and tenacity in building a program from the ground up in an area that lacks the traditional tennis resources.

“Hugh’s accomplishments stand on their own and he deserves all the accolades he receives for them,” Cantellano said. “But ultimately, Hugh embodies exactly what we are here to do for tennis. He committed himself to establishing a program and making it thrive, no matter the odds. We talk a lot about growing the game and Hugh is a great example. Hugh grew the game and he did it with class and integrity.”

After receiving his bachelor’s degree at St. John’s College in Annapolis, Md. and his masters and doctoral degrees at Northwestern University in Evanston, Ill., Curtler would become a professor of philosophy at then-Southwest Minnesota State College in 1968. Eleven years later, he took on the head coaching duties for the tennis program at Southwest.

In 1979, SSC was coming off a combined 0-15 mark from its previous three seasons. Curtler said there were many hardships that came right away, in particular having to practice and at times compete on the hardwood surface of the gym floor as well as trying to recruit players to the program and teams to play against them. But he credited the athletes who were there for staying patient through the tough moments.

“We didn’t have the R/A Facility, so the only ‘indoor’ facility was the gym floor (PE Gym). We had two courts and we had to share with the softball and baseball teams, so that was quite the adventure,” Curtler said. “We had a hard time of recruiting because they would take one look at the gym and pretty much turn around to go home. The good teams wouldn’t come down to play here, so we had to travel a lot, but the athletes stayed patient.”

Curtler was then able find a young player in Martha Garzon, who came from Colombia to the U.S. in 1989 and recruited her to Southwest State. That ultimately opened up an undiscovered avenue of recruitment for Curtler’s program.

“We were able to recruit Martha from Colombia and that became a pipeline to recruiting from South America. We also recruited a player from the Netherlands, Mexico and Finland, so we kind of became an international team,” Curtler said. “They didn’t know how bad the facility was and they were too far to leave, but those players were used to playing on soft clay courts, and the gym floor was the fastest surface to play on. We had to learn to play aggressive and fed off one another and the competition was fierce.”

Over the next 14 seasons with Curtler at the helm, SMSU showed a rise to prominence, including winning the Northern Sun Conference championship nine straight seasons from 1984-92 and the NAIA District 13 championship 10 consecutive seasons from 1983-92. SMSU also had eight Top 20 finishes at the NAIA National Championships, including an 11th place finish in the 1990 season as well as recording 172 total victories and producing five NAIA All-Americans.

Curtler said they had a big impact on him and he was extremely blessed to be surrounded by wonderful athletes throughout the years.

“I was blessed to have excellent athletes. I enjoyed it and it was a wonderful ride; I was blessed to bring good athletes to SMSU, because at the time it wasn’t the place to play good tennis,” Curtler said. “A lot of them came and many of them stayed and gave 110 percent of their effort and it was very rewarding. I still have fond memories of that time and it’s been very wonderful.”

The USTA Northern Section Hall of Fame induction will be begin with a banquet at 5:30 p.m. tonight, followed by a dinner and the induction ceremony. Curtler said he’s looking forward to having his family alongside him and is proud to be able to represent SMSU and the athletes he coached.

“I’m looking forward to it,” Curtler said. “There are three other inductees and I know all three of them and even coached against two of them, so it’s neat that they’re going in at the same time as me. My wife and two sons will be there and it’s something that I’m delighted by. But it’s not about me, it’s about what these women did and the remarkable things they accomplished.”