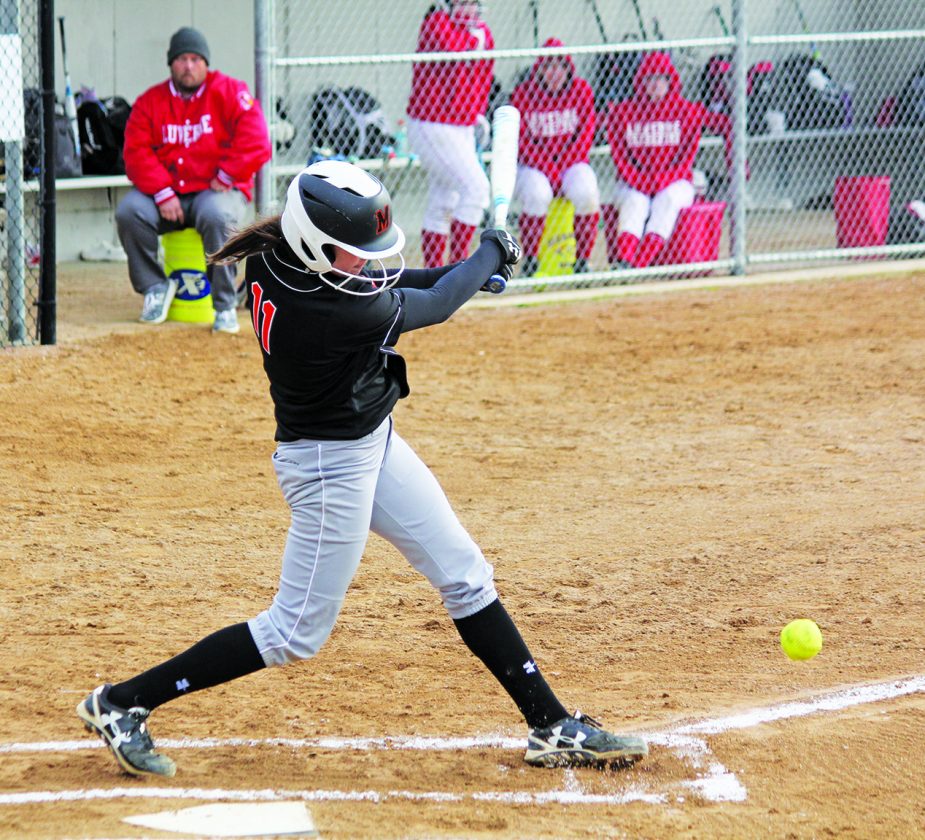 Photo by Jake Przytarski Marshall’s Paige Andries connects on a base hit during their doubleheader against Luverne on Thursday. The Tigers fell to the Cardinals 13-6 in Game 1 before winning Game 2 10-5.

MARSHALL – As the regular season winds down and the section playoffs gets closer and closer, the Marshall softball team had been searching for a signature win to generate some confidence heading into the postseason. In Thursday night’s doubleheader with Luverne, they may have just found it, as the Tigers shook off a hard-fought loss in Game 1 to come back and beat a red-hot Cardinals club in Game 2 by a final score of 10-5.

The victory was guided in part by a complete-game gem in the circle from starting pitcher Madison Wegner, who said adjustments to her fastball proved to be highly-effective in keeping hitters off balance.

“Mostly we were working on a new fastball, it was like a two-seam and so we worked on that a lot and that worked really well for me,” said Wegner. “It moved a lot like it would go inside then just transform out so that helped a lot.”

According to Wegner, the victory will serve as motivation for the whole team in knowing that they can take their game to another level.

“It just really helps us because obviously we’re not doing that great this season, but just getting those little wins against teams that we don’t think we will beat just motivates all of us to think that we can do a lot better,” said Wegner.

The opener of the twinbill began with both teams knotted up at one apiece after two, but a six-run third inning for the Cardinals was the springboard for what would end up being a decisive 13-6 win.

Taking the loss in the circle for Marshall was Ashleigh Steinbach, who pitched all seven innings for the Tigers and picked up four strikeouts while giving up a total of 17 hits to a strong-hitting Cardinals team.

At the plate, the Tigers were led by Paige Andries and Aubrey Bjella, who each finished the game with three hits on four at-bats. Jamie Timmerman also chipped in with a key two-RBI double in the bottom of the third inning that helped partially erase the six-run deficit accumulated in the top half of the inning. In total, the Tigers picked up nine hits in the contest.

It took the Cardinals three innings to get a hit off of Wegner in what was a tone-setting performance from the opening pitch. By then, the Tigers had generated three runs via a pair of wild pitches to score Timmerman and Versaevel after they both reached with singles in the bottom of the second. In the bottom of the third, Wendorff drove in Andries with an RBI single to drive in the third run.

Wegner would run into some trouble in the top of the fourth inning when the Cardinals were able to break through with back-to-back extra-base hits to score two. In the top of the fifth, she was tested again with a lead-off solo home run followed by a single and a walk, but shook it off to retire the next three batters that included two of her game total of five strikeouts to keep it 6-3 in favor of the Tigers.

In the bottom half of the fifth, the Cardinals elected to make a pitching change that would prove to be ineffective as Marshall went right back to work offensively with two more runs generated by an RBI single by Wegner and an RBI double by Leah Schaefer that made it 8-3.

The Tigers would all but put the game away in the bottom of the sixth inning when Andries picked up her fourth hit with a lead-off double. She would later be waved around to score thanks to an RBI ground out by Wendorff that pushed the lead back to five runs after Luverne picked up a run earlier in the inning. Before the final out was tallied, Marshall would score its 10th run of the game when Versaevel scored on a Bjella single.

The Tigers will stay at home today to take on the New Ulm Eagles at 5 p.m.