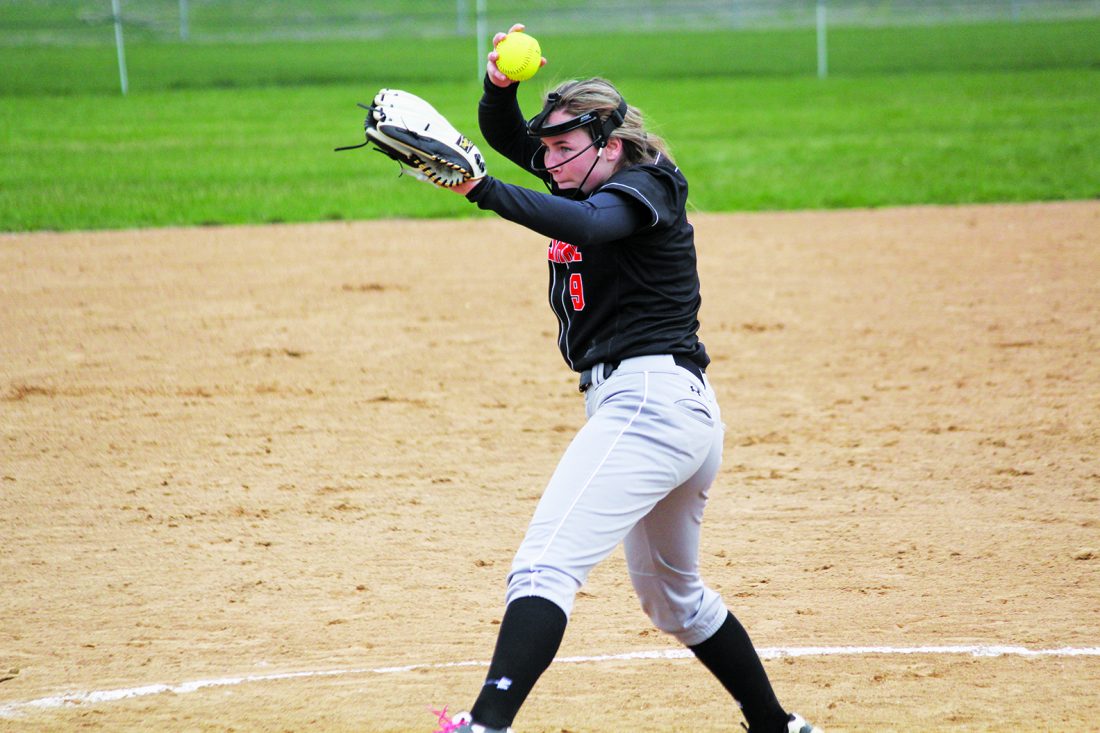 Marshall’s Ashleigh Steinbach winds up a pitch during their doubleheader against Waseca on Monday. The Tigers took Game 1 7-3 before falling 10-9 in Game 2.

MARSHALL – It was a tale of two distinctly different games in Marshall’s doubleheader with Waseca on Monday as the Tigers opened the twinbill with a 7-3 win by utilizing a sharp-performance defensively and at the plate. In Game 2, the offensive surge continued, but an error-riddled effort in the field proved costly as the Bluejays earned a 10-9 win despite being outhit 12-5.

Overall, Marshall coach Jack Houseman was proud of his team’s performance in the opener, but acknowledged that the free runs given up early in Game 2 provided too steep of a challenge to battle back from down the stretch.

“I thought we played really good defense in that first game,” said Houseman. “We had a little problem with the ball in the second game and gave them quite a few runs there. Then we had to work our way back and couldn’t get it done there at the end.”

The offensive woes that limited the Tigers to only three runs in their previous doubleheader with St. Peter last week were noticeably absent when the team stepped to the plate in game one with the Marshall batters able to exceed that total in the first inning alone with five runs scored.

The five-run frame began with a pair of singles from Leah Schaefer and Lenei Estrada, before a pair of walks in the ensuing at-bats scored the first run of the game for the Tigers. The scoring was capped off by a two-RBI single by Jamie Timmerman to make it 5-0 after one.

In the circle for Marshall was freshman Ashleigh Steinbach, who would end up going the distance with a dominant performance to limit the Bluejays to a single hit through four innings and eventually earn her first win at the varsity level.

In assessing her performance in the circle, Houseman came away especially impressed by her ability to mix pitches to keep hitters off-balance.

“I thought Ashleigh did a good job the first game mixing her pitches in there, and she got her first varsity win so we’re proud of her for that,” said Houseman.

With Steinbach keeping the Waseca offense in check, the Tigers added an insurance run in the third inning via a two-out RBI single from Aubrey Bjella to push the lead to 6-0. The Bluejays would get one back in the fifth and two in the sixth, but it wasn’t enough as the Tigers picked up their second victory of the season in a 7-3 final.

It would take only one at-bat for the Tigers to find themselves up 1-0 in the top of the first inning after Schaefer connected on a hard-hit ball that appeared destined for a double, but thanks to a Waseca error, was converted into an inside-the-park home run to open the scoring. Marshall added a second run in the next inning via an RBI groundout by starting pitcher Madison Wegner to extend the lead to 2-0.

The complexion of the game changed in the third and fourth innings, however, when the Bluejays scored a total of nine runs to take a 9-3 lead thanks in part to multiple errors in the field. Though the Tigers held a significant advantage in total hits with seven to the Bluejays two through four innings of play, Marshall was faced with a tough challenge of having to erase a six-run deficit in their remaining at-bats, and nearly capped off the comeback.

With the score 10-4 in the top of the seventh inning, the Tigers benefitted from a leadoff walk and an error on their ensuing at-bat to put runners on base for Shelby Versaevel. Versaevel would drive in both runners with a hard-hit drive to left for a double to make it 10-6 with no outs.

Marshall went on to add two more runs beginning with a wild pitch to score Versaevel and a groundout to score Timmerman who reached with a walk to make it 10-8. After the next two batters were retired, Kayla Polejewski kept the rally alive with a two-out double to put the tying run at the plate. Schaefer would do her part with an RBI single, but a groundout in their next at-bat put an end to the comeback attempt with the Bluejays escaping with a 10-9 victory.

The Tigers will play another doubleheader at their home field today when they host Pipestone at 4 p.m. Houseman is hoping to continue to see improvement from his pitching staff.

“We’ve got two today and hopefully two on Thursday but once we get those pitchers squared away I think we can put a good defense out there,” said Houseman. “We’ve got a good offense.”