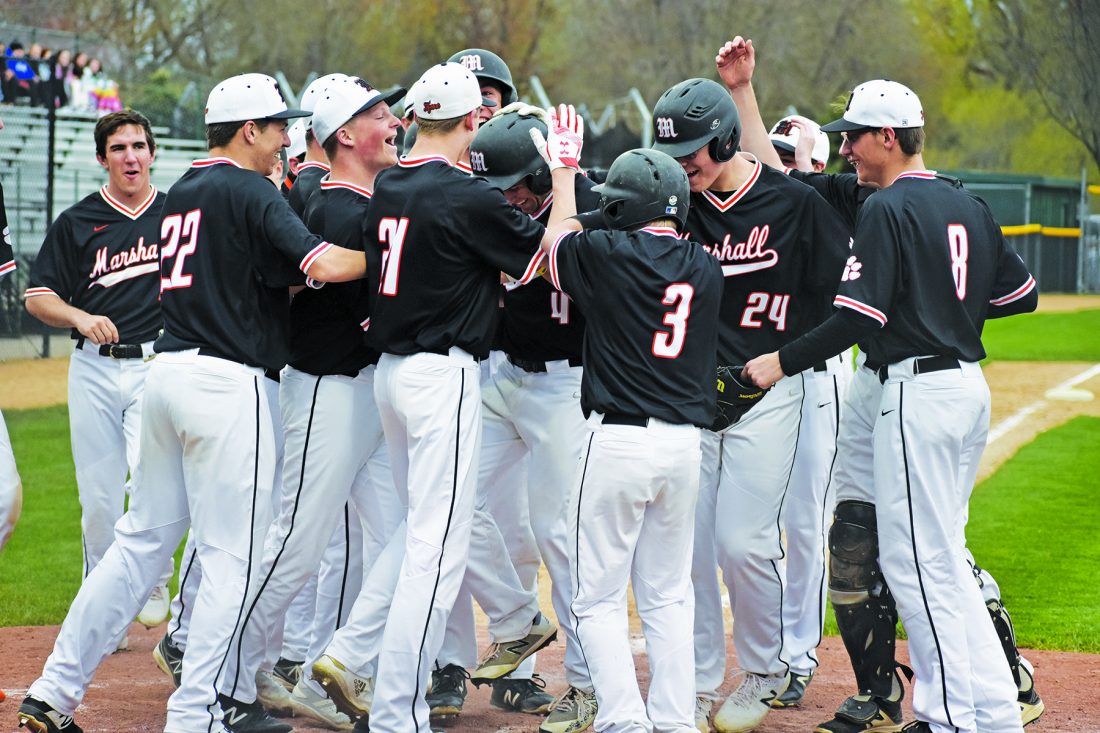 Photo by Sam Thiel Marshall’s Nick Macchio (4) celebrates with his teammates at home plate after hitting a three-run homer during their game against Worthington on Tuesday at Legion Field. The Tigers defeated Worthington 11-2.

MARSHALL – After a tough offensive outing on Monday, it didn’t take the Marshall baseball team very long to get back on track at the plate.

Utilizing a 15-hit day to the fullest extent, the Tigers broke out for 11 runs on Tuesday – including seven in the second inning – en route to an 11-2 victory over Worthington at Legion Field.

Marshall coach Chace Pollock said he was pleased with his team’s ability to respond quickly, especially after they fell in a tight 2-1 game against Hutchinson the night before.

“I thought it was great for us; we had good energy, played good baseball and it was good to see us rebound after a tough loss on Monday,” Pollock said.

Worthington was able to get out to an early lead in the top of the first, using a trio of singles to plate a run and take a 1-0 lead, but that advantage wouldn’t last long, as Marshall answered with a run of its own on an RBI double by Nick Macchio to tie things up at 1-1.

The Tigers then broke out the bats in the next inning, as Kaleb Welvaert led off with a single before Riley Alcorn was hit by a pitch and Cody Greve connected on a two-run single to give Marshall a 3-1 lead. After Isaac Schmitt brought in another run with a double on the ensuing at-bat, Alex Thompson drew a walk to bring Macchio to the plate.

The senior quickly extended the Tigers’ advantage even further, blasting a three-run shot to left for his first career home run and giving Marshall a 7-1 lead in the process.

“That was really nice,” Macchio said. “I’ve obviously never done that before and right off the bat it felt amazing, so I can’t complain about that.”

The Tigers weren’t done there, as Trey Steinbach reached on a single before Welvaert smacked an RBI triple to make it 8-1.

Worthington would get a run back in the top half of the third, but Marshall canceled that out with a run thanks to a Worthington error to push it back to seven at 9-2. A couple of innings later, the Tigers added two more runs on back-to-back base hits from Schmitt and Thompson to bring it to the 11-2 final.

Macchio led the way for the Tigers with a 3 for 4 day at the plate, including the home run, and added four RBI while Greve and Schmitt each had a pair of hits and two RBI and Thompson also had two hits and an RBI. Welvaert chipped in three hits and an RBI as well to the Marshall effort.

Pollock said they were able to look for the right pitches and capitalize on them and it helped the lineup get contagious with base hits.

“Hitting’s contagious and this was a great example of how it can be contagious in a good way after the last couple of games being an example of how it can go the other way,” Pollock said. “We told the guys afterwards that we’re starting to get an idea of what to look for in the batter’s box, what type of pitch and certain counts and having a good approach that way. When we got our pitch, we didn’t miss them.”

Logan Terfehr earned the victory on the mound, going seven innings while allowing just two runs on seven hits and striking out five. Pollock said Terfehr is continuing to grow more as a pitcher and is getting better with each game.

“Logan gave us a chance to win; he threw a lot of strikes, attacked the strike zone and he’s starting to develop more of an off-speed pitch which is nice and he was able to throw it consistently,” Pollock said. “He’s learning how to pitch and he’s getting better every ballgame and he’s been a great pitcher for us so far this year.”

Marshall (6-5) will face Pipestone Area on Thursday at 5 p.m. Macchio said they just need to keep things simple as they head into a long stretch of games to end the week.

“We’ve got to continue to stay within ourselves and not do too much with the ball and mound,” Macchio said. “Just hit the ball, field the ball, pitch the ball and play simple.”