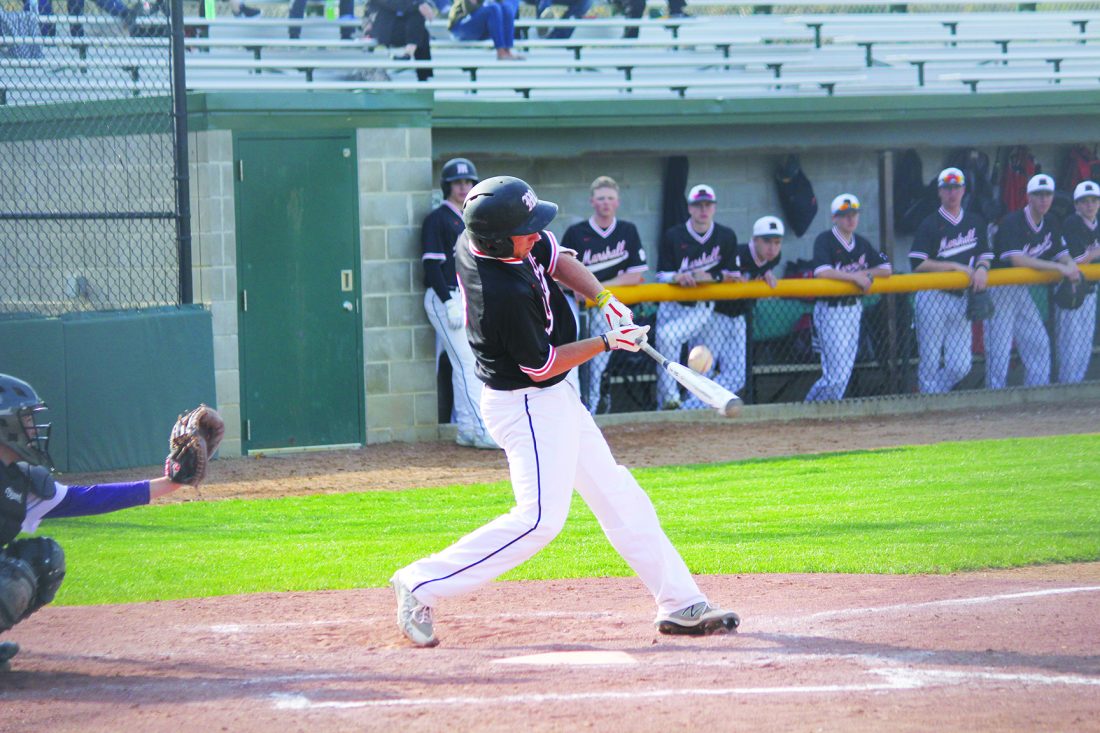 Photo by Jake Przytarski Marshall’s Nick Macchio connects on a swing during their game against New Ulm on Monday. The Tigers defeated the Eagles 13-5.

MARSHALL – The Marshall baseball team put together one of its strongest performances to date in Monday’s Big South Conference showdown with New Ulm that featured a dynamic display in all three phases resulting in a 13-5 dismantling of the Eagles.

Coach Chace Pollock came away highly pleased with the well-rounded effort put forth by his team that culminated in a crucial victory for the Tigers.

“I thought we played a complete game,” said Pollock. “Defensively, offensively and Terfehr pitched a nice game and gave us a chance to win.”

After coming up short twice in Saturday’s two-game road trip, Pollock acknowledged that the team needed a win to get back on track.

“We needed a win. We lost a couple of tough ones there, and just to come out and play hard good things will happen and that’s what happened,” said Pollock.

It didn’t take long for the Marshall bats to heat up when they stepped to the plate in the bottom of the first as Alex Thompson led off with a single and Isaac Schmitt drove him in with his first of two RBI base hits to even the score at one apiece. Far from finished, the Tigers took a 2-1 lead on a wild pitch before Andrew Mulso brought in two more runs with a single to score Nick Macchio and Trey Steinbach.

With a three-run cushion to work with, Terfehr made sure that the Marshall lead was in safe keeping by holding the Eagles scoreless in the next three innings. The junior would remain on the mound for a total of six innings while racking up four strikeouts in a winning performance.

Pollock identified control and strong pitch selection as some of the keys to the successful outing for Terfehr.

“I thought he threw strikes first of all, he was in the strike zone a lot and mixing up his pitches and we played well behind him,” said Pollock. “Even some of the hits that he gave up were not very hard hit but they did hit a couple hard though but you know he did a nice job. I was happy with his performance.”

The bats remained hot in the next pair of innings as the Tigers extended the lead to 8-1 with Schmitt adding another RBI single in the second inning and Thompson followed suit with one of his own in the third. An error and a wild pitch helped score the other two runs for Marshall in the third inning.

The complexion of the game changed after four and a half innings when the Eagles trimmed the deficit back to four runs with a two-run fourth frame and a one-run fifth. Fortunately, the Tigers put an end to any hope of a comeback for the visiting team when they put five more runs on the board in the bottom of the fifth inning via clutch hits from Jackson Hughes, Thompson and Steinbach. Kaleb Welvaert and Macchio also earned RBIs with a sacrifice fly and a walk, respectively.

The Eagles would get one back in the sixth to make it 13-5 but were held scoreless in the seventh frame as Hughes took over on the mound to record the final three outs.

The Tigers will be back in action today when they travel to Blue Earth to take on Blue Earth Area in a doubleheader beginning at 4:30 p.m. Pollock hopes that Monday’s win will help the team to continue to build momentum as they head into the postseason.

“Well we just need to get some momentum going into the playoffs and now we go (play) two (in) Blue Earth,” said Pollock. “We have to be ready to go and never blink, and as the schedule continues to roll through, just keep playing hard and stay healthy.”