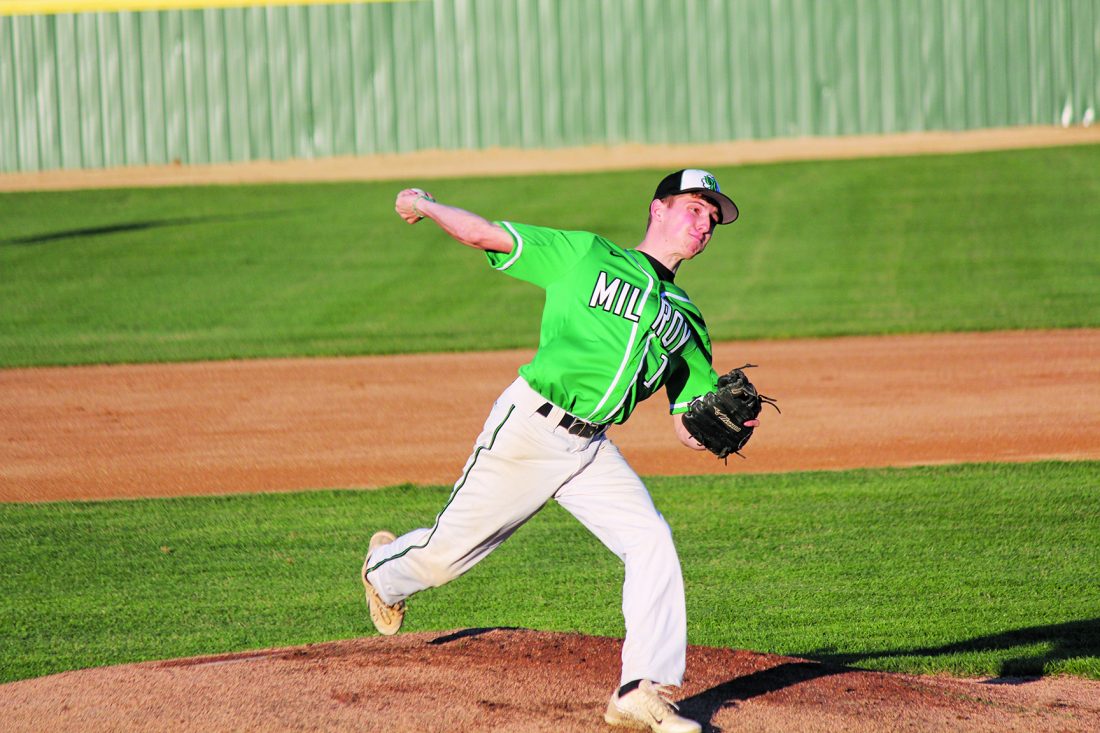 Photo by Jake Przytarski Milroy’s Moses Dolan delivers a pitch during their game against Sacred Heart on Friday. The Irish fell to the Saints 14-0 in seven innings.

MILROY – A seven-run first inning for the visiting Sacred Heart Saints that featured three Milroy Irish fielding errors was enough to put the home team behind the eight ball the rest of the way in what would end up being a 14-0 rout at Irish Yard. With the loss, the Irish move to 2-1 on the season after previously defeating the Windom Pirates on the road in 11 innings on Sunday.

Getting the start for Milroy was Moses Dolan, who was unable to continue his string of winning starts after being pulled through a third of an inning pitched. Dolan began the outing with a strikeout, but an error that followed helped set in motion a seven-run rally for the Saints that would eventually force the Irish to make a pitching change. The error in the field was the first of three in the inning for Milroy, who would go on to finish with four total through seven innings played.

Luke Walling would go on to close out the inning and would remain on the hill until the top of the fourth inning before Tyler Alcorn stepped to the mound. After three innings pitched, Kenny Morris was called upon to finish out the game in the top of the seventh and finished strong with a 1-2-3 inning.

In the batter’s box, the Irish were unable to get into any sort of rhythm with Sacred Heart starter Jermemy Hinderks keeping hitters off-balance for the entirety of his start with nine strikeouts. Milroy would finish the game with four hits as Dominic Dolan, Anthony Dolan, Jacob Plaetz and Tyler Peterson each picking up base hits.

The Milroy Irish will look to put Friday night’s game behind them when they return home on Sunday to take on Worthington.