SECTION BOYS BASKETBALL: First round of section tournament in the books 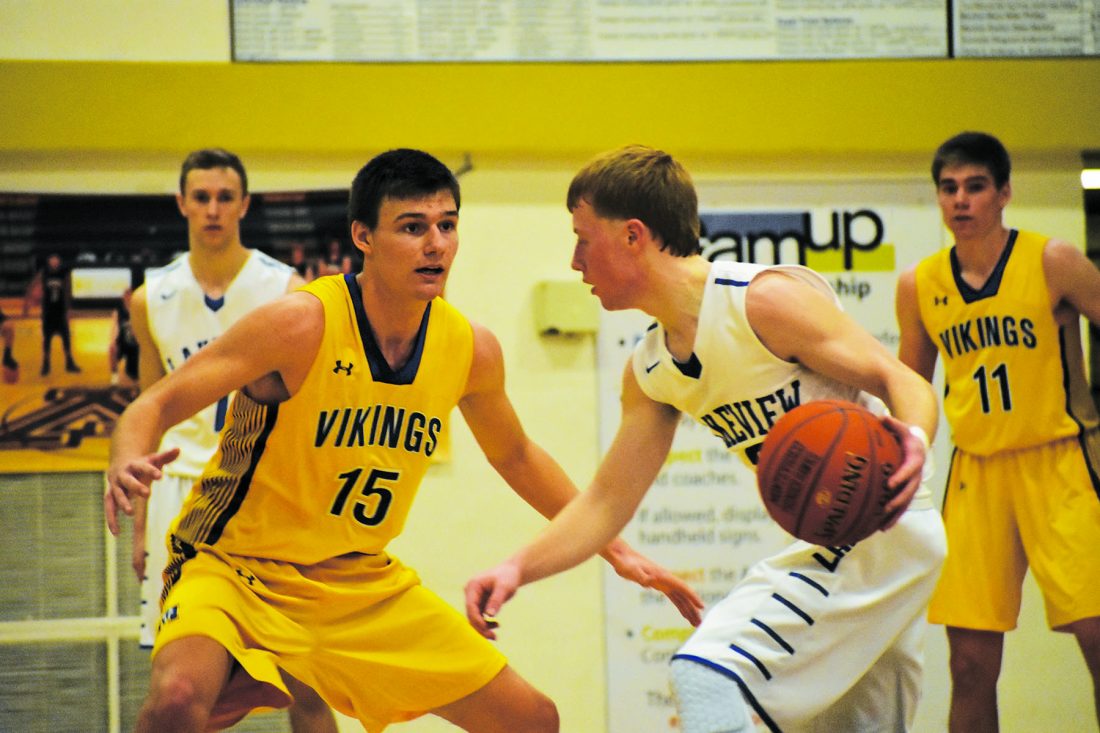 Photo by Sam Thiel Minneota’s Jacob Hennen guards Lakeview Tyler Imes during their Section 3A tournament game on Saturday in Montevideo. The Vikings defeated the Lakers 74-32.

MONTEVIDEO - The quarterfinal round of the Section 3A boys basketball tournament got underway on Saturday, with multiple area teams competing.

MONTEVIDEO – The Minneota boys basketball team looked to start its postseason on the right foot while Lakeview hoped to continue its momentum after opening its tournament with a narrow victory over Canby. The top-seeded Vikings quickly set the tone, building a solid halftime lead before rolling to a 74-32 victory over the No. 8 seeded Lakers Saturday in the Section 3A quarterfinals at Montevideo High School.

Minneota coach Dave Busselman said he was pleased with his team’s effort and felt they played with a high level of consistency on the defensive end.

“I was happy with the way we played, Busselman said. “We rebounded well and I think defensively we went into more of a matchup that was consistent and that was something that we talked about doing all year. We had a couple of days to work on it and I think it worked pretty well.”

The Vikings got out to a strong start, building a 9-2 lead before an Aaron Loe 3-pointer drew the Lakers to within four at 12-8 with 12:45 left. Minneota then answered with another quick run, going on a 10-2 run before a 3-pointer from Mitchell Rost gave the Vikings a 22-10 advantage midway through the first half.

Minneota would maintain at least a double-digit lead throughout the rest of the first half, as the Vikings built a 33-18 advantage before a 3-pointer from Thomas Hennen pushed it to 39-18 with 2:19 to go. A jumper from Reid Bot would momentarily stop the bleeding for the Lakers, but Minneota would take a 44-23 lead heading into halftime.

Minneota continued to add to its advantage in the second half, using a 10-2 run highlighted by another 3-pointer from Thomas Hennen to make it 61-27 with 10 minutes left. The Vikings then maintained at least a 25-point lead the rest of the way en route to the 74-32 victory.

Despite the loss, Lakeview coach Jared Keaveny was proud of the way his team continued to compete until the final buzzer.

“The thing that’s not going to show up is that we played hard and competed. Against a team like Minneota, you have to have a lot of things go right and they got a few of the early bounces that got their confidence going and kind of got us on our heels a little bit,” Keaveny said. “The score is what it is, but the biggest thing is we didn’t stop competing and we really worked hard and continued to fight and do whatever we could and sometimes you don’t get the breaks.”

Bot led the way for the Lakers with 12 points while Carter Louwagie added seven and Loe had six.

Lakeview ends its season with a 9-17 record and graduates four seniors, including Tyler Imes, Bryce Arends, Joseph Dahlen and Bot. Keaveny said all four players are leaving an incredible legacy behind them and set a great example for the next wave of players to come through the program.

“These seniors are going to leave an amazing legacy of just being great people. They’re great teammates, hard workers, they were always asking about how they can get better and what they can do, and they’re just fantastic people. They’re leaving a legacy and an example for the younger kids and they’ll see that this is how they need to be,” Keaveny said. “You need to be someone who is selfless, who’s going to be a hard worker that’s going to do what’s asked of you; you might not always like it, but you’ve got to do what’s asked of you to be successful. That’s what these guys did, they never quit and I think they’re leaving an incredible legacy for these young guys to follow.”

Minneota (24-2) advances to the Section 3A semifinals and will face Dawson-Boyd on Thursday at 6 p.m. at SMSU.

MONTEVIDEO – The No. 5 seeded Dawson-Boyd boys basketball team began its Section 3A tournament play with a quarterfinal matchup against No. 4 Central Minnesota Christian on Saturday in Montevideo. The Blackjacks knew it had to put together a complete performance against the Bluejays if they were going to advance, and thanks to a pair of key runs to close out both halves, Dawson-Boyd will keep going with a 75-58 victory.

Dawson-Boyd coach Cory Larson said the run they had to close out the first half really helped shift the momentum into their favor and keep it going in the second half.

“I think it maybe started in the end of the first half when we were able to maybe stretch a four-point lead to eight late in the half, so it kind of feels like you have some momentum going into the locker room,” Larson said. “And then to come out and slowly push it to double figures and keep it there for a little while, CMCS did a good job of fighting back, but then they couldn’t get the stop on the other end. I thought we played hard for 36 minutes and it’s not that CMCS didn’t, we just maybe made a few more baskets than they did.”

It was a tight start, as Dawson-Boyd held an early 8-5 lead before a 3-pointer from Zach Durfee made it 14-9. The Bluejays battled back, though, going on an 8-3 run to tie things up at 17-17 with 10 minutes left, but Dawson-Boyd countered with a 7-1 spurt of its own to make it 24-18 with eight minutes to go in the first half.

CMCS would hang around, however, going on another run to cut the deficit to one at 26-25 before the Blackjacks closed the first half on a 12-5 run to take a 38-30 lead going into halftime.

Unlike its first-half counterpart, Dawson-Boyd quickly gained control using the momentum it had gained from the final minutes of the first frame. The Blackjacks would take a 45-32 lead in the opening possessions of the second half before CMCS cut the deficit to within eight on a 3-pointer with 9:13 left. The Bluejays continued to stay within striking distance of Dawson-Boyd over the next several minutes, eventually making it a six-point game at 62-56 with 3:12 to go.

But then the Dawson-Boyd defense stepped up when it needed to most. Multiple key stops by the Blackjacks helped lead into transition offense, as Dawson-Boyd went on a big run highlighted by a Colton Husby layup, two free throws by Jake Lee, another layup by Bentley Boike before Durfee got a 3-point play to go to create separation in the closing minutes before earning the 75-58 victory.

Durfee led the way for Dawson-Boyd with 23 points while Boike added 13 and Husby had 12. Durfee also led in rebounds with 10 while Keaton Schuelke led in assists with five.

Larson said their key on offense was their ability to move the ball well and keep different options going at the same time.

“I thought we moved the ball well. It’s something that we stressed all week, we simply thought that we didn’t want to let them be in a position where they could always double the post and if we keep our four perimeters moving, it kind of frees up our post player a little bit and we got some other action towards the basket,” Larson said. We certainly also knocked down some threes and some big ones midway through the second half to get momentum back on your side.”

Dawson-Boyd advances to the Section 3A semifinals and will face No. 1 Minneota on Thursday at 6 p.m. at SMSU.