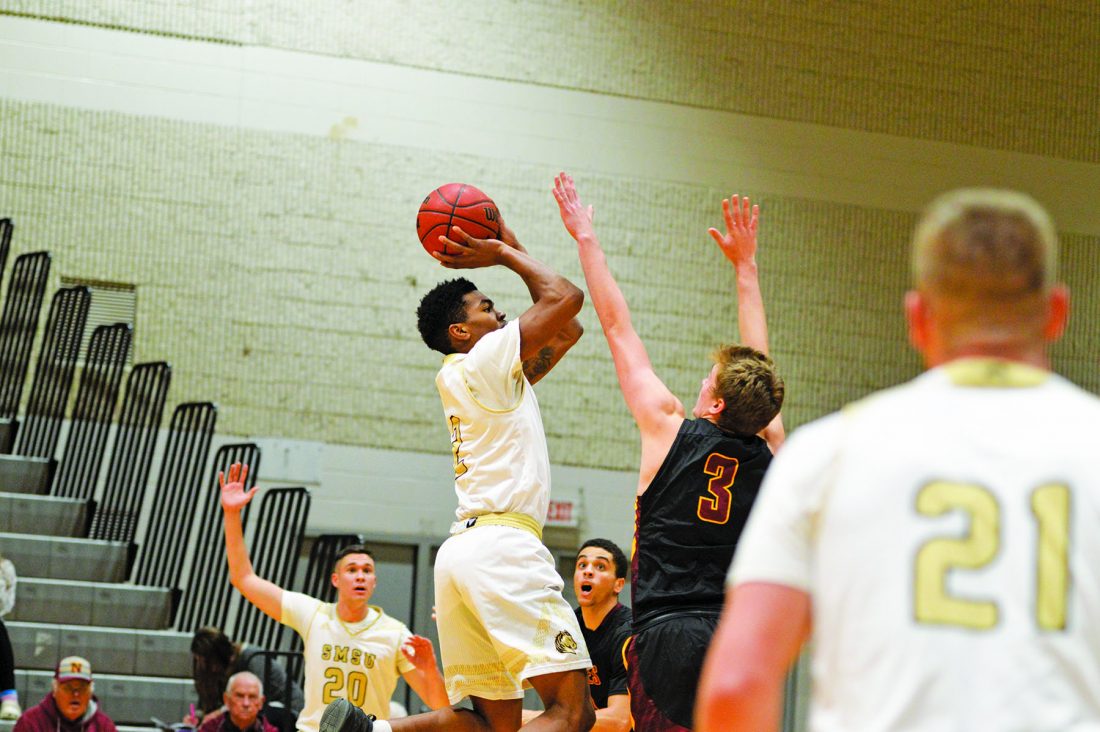 Independent file photo SMSU’s Kenny Byers takes a shot during a Nov. 15, 2017 game against Northern State University. The Mustangs will face MSU Moorhead on Friday before squaring off against the Wolves on Saturday.

MARSHALL – The Southwest Minnesota State University men’s basketball team (13-8, 8-8 NSIC), winners of three in a row and five of its last six, hit the road for a pair of games this Friday and Saturday versus two of top teams in the NSIC North Division standings.

•SMSU concludes the weekend with a 6 p.m. matchup versus Northern State University (17-5, 13-3 NSIC) on Saturday, at Wachs Arena in Aberdeen, S.D.

•SMSU has a 5-1 record versus the NSIC North Division this season and are a combined 37-17 versus North teams in conference play since divisions were introduced prior to the start of the 2012-13 season.

•Live stats and video can be found at SMSUmustangs.com.

•SMSU and MSU Moorhead meet for the 103rd time on Friday with MSUM leading 58-44.

•SMSU and Northern State meet for the 95th time on Saturday with NSU leading 63-31.

•NSU leads 35-10 in games played in Aberdeen, but SMSU has won the last two games, including 64-57 last season.

•The teams played three times last season with NSU winning twice. NSU won 81-68 in a non-conference game in Marshall, before SMSU earned a 64-57 NSIC win in Aberdeen. NSU then earned an 81-75 victory in the NSIC Tournament championships game in Sioux Falls, S.D.

•MSUM, which has won nine of its last 12 games, has five players averaging double figures in scoring.

•Senior forward Addison Park is averaging a team-high 15.8 ppg, while shooting 58 percent from the field.

•Freshman guard Gavin Baumgartner is scoring 14.7 ppg and has connected on 51 3-pointers.

•Senior guard Travaun Coad leads the team with 5.5 rpg and is scoring 14.5 ppg.

•Sophomore guard Andrew Kallman has connected on a team-high 40 3-pointers.