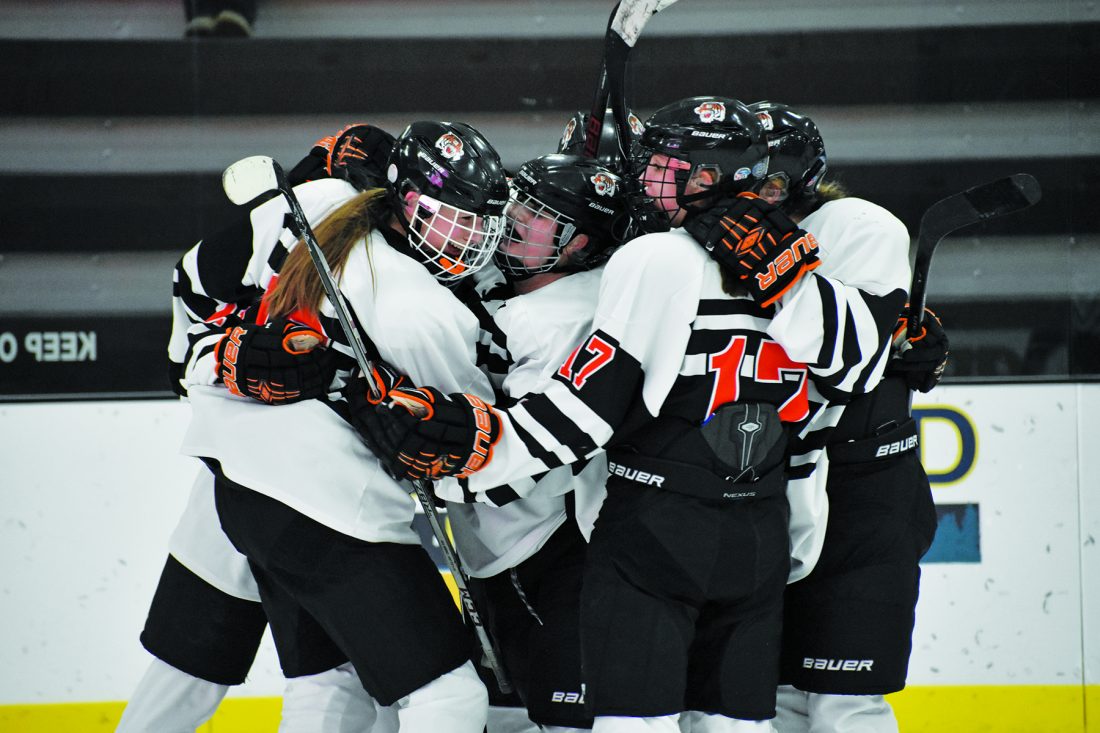 Photo by Sam Thiel Marshall’s Logan Sherman (left) celebrates with her teammates after scoring the game-winning goal in their Section 3A quarterfinal game against Fairmont on Friday. The Tigers defeated the Cardinals 3-2 in double overtime.

MARSHALL – When Logan Sherman collected the puck on the Tigers’ side of the ice during the second overtime of the Section 3A quarterfinal against Fairmont, she thought about a lot of things as she headed up the ice.

“I just remembered looking around the locker room and I knew that on that last drive, I just thought about our seniors and how hard they’ve worked and how hard our whole team has worked,” Sherman said. “On that last drive I knew I had to just put that one in to end it.”

The junior defenseman made sure that last thought counted, racing down past the Cardinals defense for the breakaway before scoring with 8:21 remaining in the second extra period, propelling the No. 2-seeded Tigers over No. 7-seed Fairmont 3-2 in double overtime Friday night at the Red Baron Arena and Expo.

The Tigers were nearly on the verge of escaping with a victory in regulation after trailing early against the Cardinals, but a late goal by Fairmont would force overtime with the score deadlocked at 2-2.

The Cardinals used the adrenaline it had gained from the equalizer to begin the first overtime period, but Marshall’s stifling defense and solid goaltending helped extend play. The Tigers would have a few chances of their own in the frame to come away with the win, but the Cardinals were equally as impressive on their side of the ice.

Going into the second overtime, Marshall knew it needed to get out to a better start in order to prevent the Cardinals from striking. After a few minutes of heart-pounding action, it was Sherman who found herself with a chance to move Marshall into the semifinals. Sherman’s shot found the back of the net, as the home fans erupted in celebration.

“Honestly, I was so exhausted, my adrenaline was really high,” Sherman said after scoring the game-winner. “But just celebrating with my team afterwards, there’s nothing better than that.”

Senior forward Olivia Peterson said they’ve been working hard to get to this moment and just needed a little extra movitation to come away with the win.

“We knew that we had been practicing hard all year and we put in some good days of practice earlier this week,” Peterson said. “We knew that we were in shape, we just had to have the heart and want it more than they did.”

In their third meeting of the season, the Tigers had been able to use a strong scoring attack against the Cardinals in 8-1 and 10-0 victories. Both teams knew it was going to be different this time around, and Fairmont quickly made its early case.

After back-and-forth play opened the section showdown, the Cardinals were able to strike first, as Joni Becker deflected in a goal off the assist from both Mackenzie Householder and Brooklyn Meyer with 8:07 left in the first period, giving Fairmont a 1-0 lead. Marshall was able to find chances on offense early, outshooting the Cardinals 11-3, but multiple turnovers kept the Tigers off the board.

The Tigers were able to create some movement with the puck to start the second while continuing to crash the net on offense. Marshall would finally be able to break through with 11:13 left in the frame, as Leah Schaefer came in and put one in the back of the net to tie things up at 1-1.

Both teams continued to trade quality looks at the net, but neither side could find a way to capitalize. As the second period clock crept under 30 seconds, it appeared the Tigers and Cardinals would head to the final frame of regulation in a one-score stalemate. But Marshall had other plans, as freshman forward Tessa Gannott collected the loose puck and raced down the ice before burying a shot past the Fairmont goaltender with 18 seconds remaining, giving the Tigers their first lead of the evening at 2-1 going into the third.

Peterson said their key in the second was continuing to crash the net and fight for loose pucks and second-chance opportunities.

“When we got those goals, they were all from rebounds and crashing the net and just working hard and making sure we were getting those pucks to the net,” Peterson said. “Going forward, we know that’s what we need to do.”

Now with a slim lead, the Tigers knew it had to stay strong on defense while the Cardinals searched for a way to tie things back up again. Both teams kept the puck moving all throughout the third, before a penalty on Fairmont gave Marshall a power-play opportunity with just over two minutes left.

Despite being short-handed, the Cardinals refused to quit, attacking their offensive zone with more and more intensity. With just 1:06 remaining, Fairmont came through when it needed to most, as Anna Nordquist punched in a goal on the assist from Householder to tie things back up at 2-2 and ultimately force overtime, setting the stage for the extra-time excitement.

Sherman said defensively, they did a good job of keeping Fairmont to the outside of the crease and limiting scoring chances in front.

Marshall (17-6-3) advances to the semifinal round of the Section 3A tournament, where a familiar face awaits the Tigers: Mankato West. The No. 3-seeded Scarlets – who defeated No. 6 Worthington 8-4 – will look to change its outcome after seeing the Tigers punch their ticket to state with a 2-1 overtime victory in the section title game last year. Marshall and Mankato West also skated to a 2-2 tie in December. The game is slated for a 3:30 p.m. start today in Marshall.

Peterson said it’ll be a challenging matchup and knows they’ll have to come out with more intensity than in their previous meeting.

“We know that they’re going to be a tough matchup,” Peterson said. “We tied them earlier this season and we know that we’re going to have to come out better than that game and just make sure we get pucks to the net, work hard as a team and put some pucks in the back of the net too.”

Sherman added that it’ll be important for their team to get recharged for a quick turnaround, but knows this team is capable of doing special things when they work as a unit.

“I think resting and gaining our energy back and then coming out strong,” Sherman said. “We know that the team we can be is pretty incredible when we work together and I think just being that team is really important for us to win.”