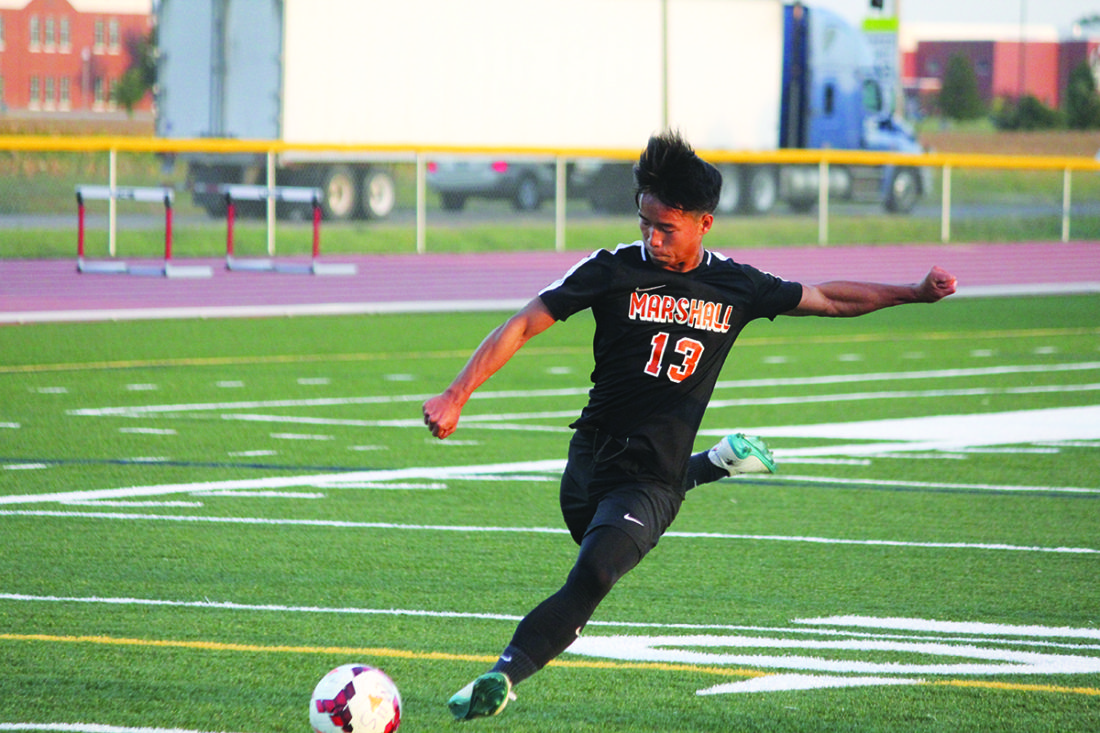 Photo by Jake Przytarski Marshall’s Mookae Stee winds up a kick during their game against New Ulm on Tuesday. The Tigers defeated the Eagles 7-0.

MARSHALL – The unbeaten Marshall boys soccer team entered its matchup with the New Ulm Eagles scoring at a torrid pace, tallying a total of 12 goals in their last three games. On Tuesday, the club would take its offensive firepower to another level – scoring a season-high seven goals in a shutout victory, moving them to 5-0-1 on the season. Marshall coach Matt Versaevel pointed to the team’s relentless nature on offense and the overall cohesiveness that the team has built as major factors in the team’s success.

“I would say definitely our movement off the ball, just being relentless (and) continuously working together,” said Versaevel. “The guys did a really good job supporting each other. If something happened they were there to help clean up stuff. They just worked together really well.”

It wouldn’t take long for the red-hot Tigers to find the back of the net in the first half as they maintained control of the ball in the Eagles’ side of the field while generating numerous quality scoring chances in the process before Mookae Stee buried his first of two goals on the night at the six and a half minute mark. Moments later, Hsa La Eh put another one past the Eagles goalkeeper to make it 2-0 midway through the half. The Tigers were far from done, however, as Stee and Jonathan Alvarez scored the next two goals before the end of the half to take a resounding 4-0 lead into halftime.

After failing to generate any legitimate scoring chances in the first half, the Eagles were able to put together some early chances to get on the board early in the second but came up empty thanks to stout play from the Marshall defense. The Tigers maintained complete control of the ball and peppered the Eagles goalkeeper with constant pressure before Alvarez broke through for his second goal of the night to make it 5-0 with 29:22 left. Before the final whistle, the Tigers would add a sixth goal off the foot of Hugo Cifuentes, and a seventh and final goal from Eli Salisbury.

Leading up to their impressive seven-goal outburst on Tuesday, coach Versaevel has been emphasizing the need to put shots on net in practice drills and it’s currently paying dividends in games.

“We’ve just been working on a lot of offensive drills just working on getting all of our shots on frame so we’re not missing the net a bunch,” said Versaevel.

The Tigers will be back in action in a Thursday night home matchup with Southwest Minnesota Christian, as they look to move to continue their undefeated run to start the season. In order to do that, coach Versaevel wants his team to maintain its high-scoring mentality and keeping the pressure up.

“(We) just (need to) try to keep up the mentality, keep up the pressure,” said Versaevel. “Just (continue doing) everything we’re doing (and) keep it pushing right on through.”