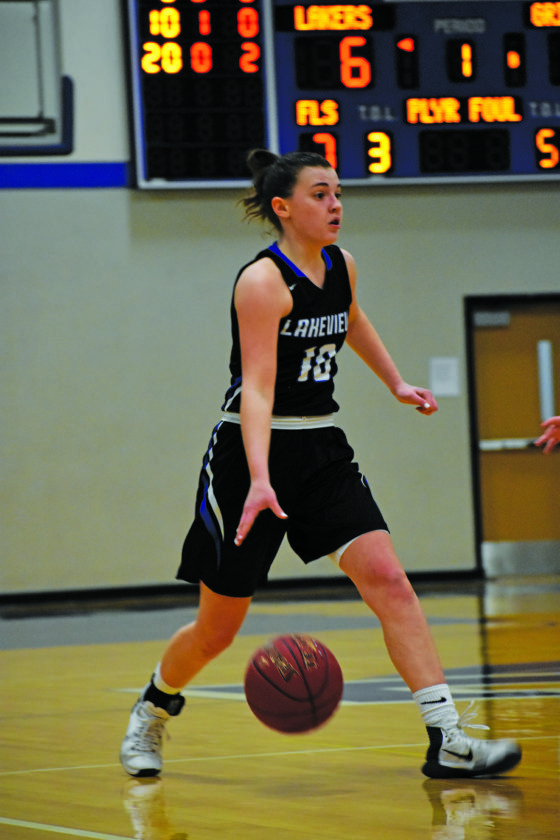 Photo by Sam Thiel Lakeview’s Alexis Lienemann brings the ball upcourt during their Section 3A tournament game against Hendricks on Thursday. The Lakers fell to the Grizzlies 59-21.

COTTONWOOD – The Lakeview girls basketball team found themselves in an early deficit in their Section 3A tournament game against Hendricks and couldn’t overcome the red-hot shooting from the Grizzlies as the Lakers fell 59-21 in the opening round of the postseason Thursday night.

The Grizzlies finished the game with a shooting mark of 41 percent, including nine of 17 from beyond the arc while the Lakers shot just 18 percent from the field.

It was all Hendricks to start, as the Grizzlies led 5-2 early before going on a 10-4 run to take a 15-6 lead with 7:43 left. The Lakers struggled to take care of the basketball in the first half, with Hendricks converting on Lakeview’s mistakes on the other end.

The Grizzlies continued to create quality scoring chances throughout the majority of the first half, as Hendricks extended its lead to 28-6 with three minutes left. With six seconds left – after going scoreless for nearly eight minutes – the Lakers got a shot to fall on a Haley Unke jumper, but Hendricks took a 35-8 lead into the locker rooms.

The Grizzlies would continue to add to their lead in the second half, with Hendricks maintaining at least a 30-point advantage throughout the majority of the frame. Hendricks reached its largest lead of the night at 41 points down the stretch before a 3-pointer at the buzzer by the Lakers brought it to the 59-21 final.

Lakeview coach Mike Imes said he was proud of his team’s ability to compete this season and come together after losing their entire starting lineup from a year ago.

“Coming in we were so inexperienced. We had to replace all five starters. I thought the girls did a great job other than Wednesday of really competing hard. They came a long ways and this game doesn’t replicate anything of what we’ve tried to do all season long,” Imes said. “The group of six seniors that we’ve got did a nice job of bringing our younger kids along and providing some leadership. We just struggled most of the year to put the ball in the hoop and that was evident this game.”

Imes said they wanted to work the ball into the post and then find the open teammate, but they just had too many turnovers and couldn’t get a rhythm going offensively.

“We were trying to get some high-low action going because they pack it in so much, so we thought we could kick it out and hit some threes,” Imes said. “We just didn’t shoot well enough and had too many turnovers.”

Lakeview ends its season with an 8-19 record. Imes said their biggest takeaway from the season will be continuing to improve on both sides of the court and prepare their younger players more.

“We’ve got a lot of young talent. Our B-squad was 20-5 and a lot of those kids were forced to play varsity,” Imes said. “They played tremendous defense this year; this game was one the few games that we didn’t do that but we ranked in the top four in our section in defense. A lot of the younger players really bought into our zone defense and how to shut teams down. That’s something that we can build on and I think we can also get better offensively as we go forward.”