NSIC TOURNAMENT: Mustangs survive fast start in opening round victory over the University of Mary 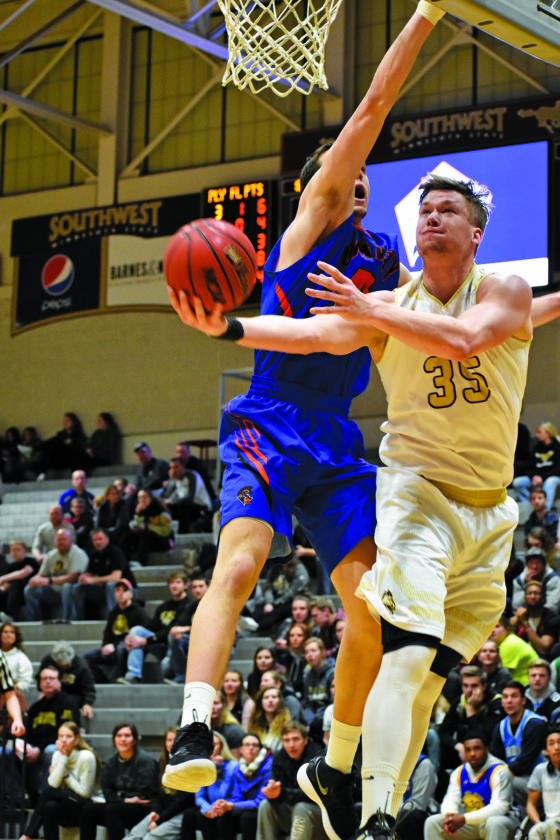 Photo by Sam Thiel SMSU’s Carter Kirk goes in for a reverse layup during their NSIC/Sanford Health tournament game against the University of Mary on Wendnesday.

MARSHALL – After being beat by the Mustangs a few weeks ago, the University of Mary wanted to come out with a much better start on Wednesday night. The Marauders did just that, but the Southwest Minnesota State University men’s basketball team endured every knockout blow thrown at them, as the Mustangs earned a hard-fought 78-73 victory in the first round of the NSIC/Sanford Health tournament.

SMSU coach Brad Bigler gave credit to U-Mary’s toughness throughout the game and said his team was fortunate to come out with a win.

“I have to give the University of Mary a lot of credit; their seniors just didn’t want to go home,” Bigler said. “I thought they were scrappier than us for the majority of the night and we were just fortunate to have the ball bounce our way down the stretch.”

The Marauders delivered the first few punches in the opening half, as U-Mary took an early 9-2 lead to start. SMSU would work its way back into the game and cut it to a three-point deficit at 11-8 with 14 minutes left before both teams would trade points over the next few possessions.

With the Mustangs trailing, KJ Davis provided an early spark by drilling a 3-pointer to bring it to just a two-point game with nine minutes to go, but the Marauders answered right back. U-Mary would get a 3-pointer of its own before earning a four-point play on back-to-back possessions to give the Marauders their biggest lead of the night at nine points, 30-21 with 6:48 left.

Once again SMSU found a way to answer, with the Mustangs getting a three-point play from Carter Kirk that highlighted a 9-2 run to cut it to a two-point deficit. Michael Lee – who had connected on 13 of his last 21 attempts from behind the arc in the Mustangs’ last three games – would continue the hot streak from long distance as he found a 3-pointer from the corner to give SMSU its first lead of the night at 33-32 with 3:30 left.

Both teams would dial up the tempo in the final few minutes, as the score bounced back and forth on each possession. The Mustangs would get one final bucket to go to close the first half as SMSU took a narrow 42-40 lead into the locker rooms.

U-Mary came into the halftime break on fire offensively as the Marauders connected on a blazing 64 percent of their shots, including a near-perfect 13 of 14 from inside the perimeter. SMSU would go into the break with a 52.9 percent shooting performance, including going four of 11 from 3-point range.

The back and forth play that ended the first half was just the beginning as both teams continued to put on a show for the fans. Neither team would hold a lead greater than three points in the second half’s opening minutes, with each side coming up with an answer to the former one.

The score would find itself deadlocked at 60, with both teams still looking for that key run to create some separation. SMSU would be the first to reach that run, as the Mustangs got another 3-pointer from Lee and a layup from Kirk to give themselves their biggest lead of the night thus far at 65-60.

After allowing the quick start to both halves, the SMSU defense was able to string together a few stops to try and cool off the Marauders. On the other side of the court, the Mustangs continued to create quality scoring chances as SMSU got a four-point play from Lee in the corner and a pair of free throws from Ryan Bruggeman to give itself an eight-point advantage at 72-64 with 2:30 left.

U-Mary wouldn’t go away, though, as it converted on a three-point play with 1:40 left to cut it to 72-67. After a miss by the Mustangs, the Marauders were fouled and had a chance to bring it even closer at the line. But a pair of misses from Michael Gorder of U-Mary gave the ball back to the Mustangs, who closed it out at the free-throw line to earn the 78-73 victory.

Kirk led the way for the Mustangs with 24 points and 14 rebounds while Lee and Bruggeman added 18 points apiece. SMSU shot 48.3 percent from the floor on the game while U-Mary finished with a shooting percentage of 51.9.

Bigler said he was pleased with Carter and Michael’s ability to provide some big moments offensively, but overall said there’s work that needs to be done.

“I thought Carter was really good at finishing through contact and Michael had his moments where he was able to step up and knock down some big threes,” Bigler said. “All in all, we’re going to have to have a lot better performance as we move forward.”

Defensively, Kirk said they were able to create some pressure in the paint as well as make their adjustments as the game went on.

“We were doubling in the post, but our transition defense was not good at all,” Kirk said. “We had to do a better job of getting back and I feel like we worked well with our coach’s adjustments. But give U-Mary credit; they came ready to play.”

“We have some of the greatest fans in D-II basketball and I’m going to miss playing here for sure,” Kirk said. “It went by fast, but we’re not done yet.”

SMSU (22-7) will face the University of Sioux Falls in the quarterfinals of the NSIC tournament on Saturday at 5:30 p.m. at the Sanford Pentagon in Sioux Falls. Bigler said their biggest takeaway will be just to refocus and come out stronger to start as they progress through the tournament.

“Right now we just need to get our legs back under us,” Bigler said. “We’ve got to have that attention to detail, and we’ve got to come out of the gate ready to go. I think that will take care a lot of the issues.”