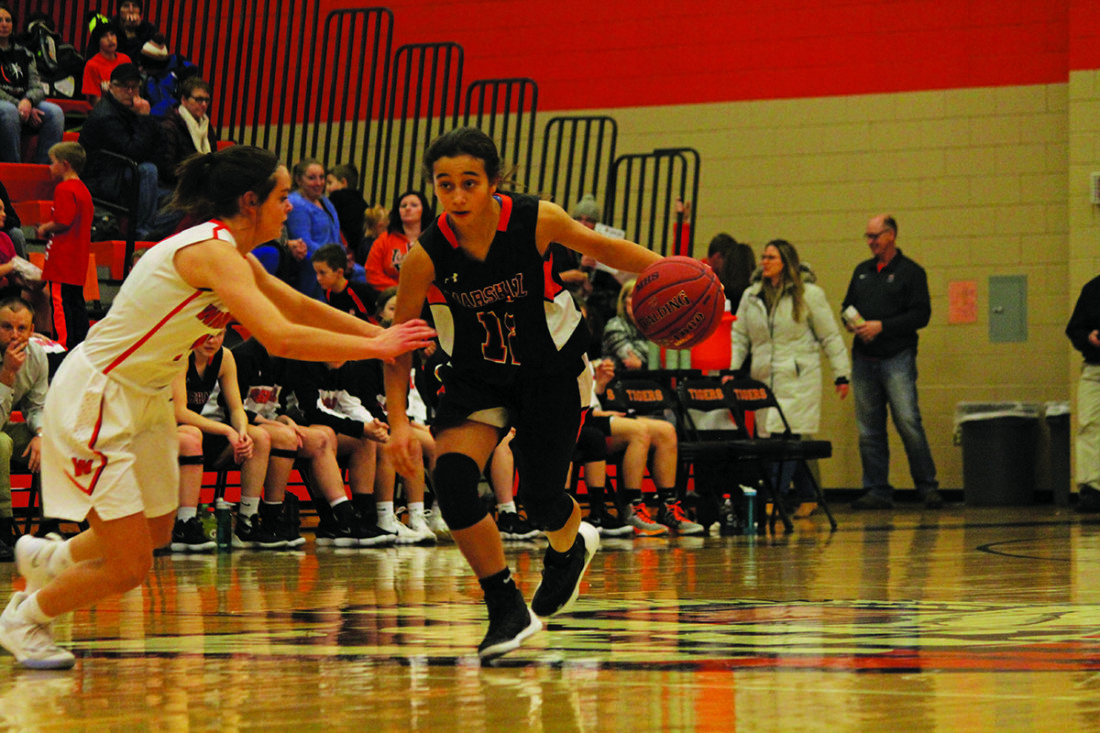 Photo by Sam Thiel Marshall’s Lenei Estrada tries to get past a Sioux Falls Washington defender during their game on Thursday. The Tigers fell to the Warriors 53-26.

MARSHALL – The Marshall girls basketball team was bit by the turnover bug during their game against Sioux Falls Washington on Thursday evening. The Tigers couldn’t find the offensive scoring bug either, as the Warriors led nearly the entire night en route to a 53-26 victory.

It was a back-and-forth start between the two teams to open the game, as both teams committed early turnovers on the offensive end. Sioux Falls got the scoring done early and kept Marshall off the board for the first four minutes until Hannah Meier got the Tigers on the scoreboard thanks to a free throw.

More turnovers by both teams continued to be the opening storyline, with Sioux Falls Washington holding just a 4-3 lead with 11:40 left in the first half. A 3-pointer by Kaia Sueker gave Marshall its first lead of the night at 6-4 but a Warriors 3-pointer on the other end took the lead right back.

Sioux Falls Washington continued to look inside to the post throughout the first half, but couldn’t finish at the rim while Marshall found its groove through the free-throw line. The Tigers defense kept Marshall in the game by forcing more Warrior mistakes, until Sioux Falls Washington took the lead at 10-9 with 6:17 left.

That basket sparked a key run over the final stretch of the first half, as the Warriors went on a 6-0 spurt to make it 16-9 with three minutes left before another 3-pointer gave Sioux Falls Washington its first double-digit lead of the night at 19-9 with 1:40 left. After a couple of more possessions, the Warriors capped the first-half run with a 3-pointer to beat the buzzer, giving Sioux Falls Washington a 24-9 lead at the break.

Marshall connected on just two field goals in the first half, but hit four of its eight attempts from the free-throw line.

Sioux Falls Washington continued to create scoring opportunities to start the second half, with the Warriors getting multiple fast break layups to build a 41-12 lead with 12 minutes left. The Warriors used a 31-0 run to aid their advantage. The Tigers, meanwhile, couldn’t find the scoring touch but continued to add points with trips to the free-throw line.

Marshall then started to string together a mini run with nine minutes left, getting three consecutive baskets from Meier, Jordyn Hilgemann and Lenei Estrada to cut the deficit to 43-20 before Hilgemann was fouled on a 3-pointer, where she would hit all three free throws to cut it to 45-23 with 6:30 left, but the Tigers couldn’t get any closer, as Sioux Falls Washington shut down Marshall the rest of the way.

Marshall coach Dan Westby said they were able to get out to a good start, but the offensive struggles from his team and the lengthy run by the Warriors were too much.

“We got off to a good start and had a 9-7 lead. Then after that they went on a 31-0 run which is unheard of,” Westby said. “We didn’t shoot it well, even inside we struggled, and couldn’t make a free throw again. It was certainly a disappointing night.”

Hilgemann led the way for the Tigers with 10 points while Meier added seven. Meier and Paige Andries led in rebounds with four each while Andries and Estrada led in steals with four apiece. Marshall shot 5 of 32 from the field as a team and committed 22 turnovers.

Westby said they can’t afford to make those types of mistakes as the season goes on, especially against teams like the Warriors.

“They were so much bigger and stronger and faster than us, and we just had a really difficult time getting anything going offensively,” Westby said. “We turned it over too much and we can’t afford to do that; our margin for error is so small against a team like this.”

Marshall (6-2) will look to get back to its winning ways next Wednesday against Mankato West.