The Gold Rush Raffle was a huge success Friday.

I would like to thank the Mustang Gold Rush Raffle Committee members for their time and effort in the development and planning for the event. I would also like to thank our coaches and staff members who were responsible for the overall execution of the activities and event schedule for the evening. We are very fortunate to have the support we do for SMSU athletics throughout the campus and in Marshall.

Thank you to all who contributed to the success of the Mustang Gold Rush Raffle!

The SMSU Department of Athletics will recognize nine student-athletes that have earned the Northern Sun Intercollegiate Conference’s Myles Brand All-Academic with Distinction Award today. A total of 96 student-athletes from the NSIC’s 16 institutions and two affiliated members will receive the award, which in its fifth year.

The honor, named for the late NCAA president Dr. Myles Brand, is bestowed to senior NSIC student-athletes who have a cumulative grade point average of 3.75 or higher, are exhausting their eligibility and are on track to graduate. Each student-athlete will be recognized by the NSIC with a certificate of achievement and a wrist watch. Congratulations to these nine student-athletes for their hard work and academic excellence.

The fun and activities continues this week on campus.

The SMSU Department of Athletics will be hosting the “It’s a Slam Dunk, Don’t Drive Drunk” campaign today and Saturday, when the Mustangs play their final regular season home basketball games of the 2013-14 season.

For the second straight year, Student-Athlete Advisory Committee members from across the NSIC produced videos with the underlying theme of the campaign. The videos honor Drake Philip Bigler, the five-month old son of SMSU head men’s basketball coach Brad Bigler, who was tragically killed by a drunk driver on July 28, 2012.

Videos were submitted through the SAAC’s Facebook page (www.facebook.com/NSICSAAC) and were judged on overall impact, creativity, memorable content, delivery and clear message. Concordia-St. Paul won this year’s award for the top video. The video named most outstanding of all submissions will be recognized during halftime at the NSIC Basketball Tournament championship games.

To help further raise awareness during the last month, each SAAC group will have a booth at their arena to have people in attendance sign and a pledge card stating that they will not drive drunk. Each person who signs the pledge card will receive a blue keychain with an inscription of the theme: “It’s a Slam Dunk, Don’t Drive Drunk,” the NSIC and NCAA logos and with Drake’s name.

Last year, 14 of 16 NSIC schools submitted videos with the underlying theme of “It’s a Slam Dunk, Don’t Drive Drunk.” The University of Mary’s submission was named most outstanding, while Southwest Minnesota State University collected 1,337 pledges from fans, the most in the NSIC, to earn $1,000 that was donated in SMSU’s name to the Make-A-Wish Foundation.

Bring your family out to the SMSU men’s and women’s basketball games this weekend and support the Bigler family, SMSU and the NSIC with the “It’s a Slam Dunk, Don’t Drive Drunk” campaign.

Also this weekend, the SMSU Department of Athletics, along with Affiliated Community Medical Center (ACMC), will be hosting the annual “Pink Zone” campaign on Saturday at the R/A Facility. The event raises awareness and focuses on women’s health.

Each February, during the “Pink Zone” event, the R/A Facility is decorated in pink to show support for breast cancer awareness. The day will be filled with a number of activities, including prize giveaways. Several SMSU students will also be donating hair to Locks of Love during halftime of the men’s game. College Against Cancer will be selling pink T-shirts to raise money for Relay for Life and ACMC will be serving ice cream for all fans at the basketball games on Saturday.

For all your information about this weekend’s activities and SMSU athletics, visit our website: www.smsumustangs.com.

It will be Senior Day as SMSU pays tribute to six seniors who have all played a major role in the programs growth during the last five years.

Following this weekend, the Mustangs begin play in the NSIC/Sanford Health Men’s Basketball Tournament at home at 7 p.m. Wednesday versus either Minnesota-Duluth, U-Mary or Minot State. SMSU will secure the No. 3 seed in the South Division and will host the No. 6 seed from the North with one victory this weekend.

SMSU is one of five NSIC schools to appear in the regional rankings with No. 1 Winona State, No. 2 Minnesota State, No. 8 Bemidji State and No. 10 St. Cloud State. The Mid-American Athletic Association (MIAA) has four teams ranked this week with No. 3 Missouri Southern, No. 4 Northwest Missouri State, No. 5 Central Missouri and No. 6 Fort Hays State (Kan.), while the Great American Conference (GAC) has one team ranked with No. 7 Arkansas Tech.

The top eight teams in the 41-team region advance to the NCAA Region Tournament on March 15-18. Automatic bids are granted to the winners of the NSIC, MIAA and GAC postseason tournaments, with the remaining five spots are awarded on an at-large basis.

SMSU will be on the road for the first round of the NSIC/Sanford Health Women’s Basketball Tournament on Wednesday against an opponent to be determined following this weekend’s game.

The SMSU men’s and women’s indoor track and field were in action last weekend in Mankato, following a two-week break, competing at the Minnesota State Open. The men’s team had a solid day with several high finishers, including Alejandro Sanchez leading the way with a first-place time of 1:55.46 in the 800 meters. Teammate O.J. Ojullu finished in fourth place in the 800 in 1:57.43.

The Mustangs competed Thursday at the Bemidji State Twilight.

The SMSU wheelchair basketball team (13-15) team went 1-3 last weekend, losing its first game versus Sioux Falls, 34-31, before winning the next three games with two wins over the Timberwolves and concluding the weekend with a victory over Sioux Falls, 52-31. Last week’s games were the final in the regular season for the Mustangs, who will compete next at the NWBT Championships on March 6-8 in Arlington, Texas.

The SMSU women’s tennis team (1-4, 0-3 NSIC) is back in action Saturday, when the Mustangs travel to Sioux Falls, S.D., for NSIC matches versus Augustana and Minnesota-Crookston. The matches will be played at the Sioux Empire Fitness Center.

Those matches will be SMSU’s last conference matches in February and much of March before the Mustangs embark on a five-day road trip to Mesa, Ariz., during spring break to play seven non-conference matches, beginning March 11.

The Mustangs return to action March 7 with the first of 12 games at the Tucson Invitational. SMSU begins its spring trip with games versus Malone (Ohio) and Cal State-San Bernardino.

Congratulations to senior outfielder Jon Ellis has been named the NSIC Player of the Week for his performance in four games last weekend. Ellis, a native of Fairmontbatted .583 (7-for-12) with a home run, a double, six RBI and three runs in four games versus two of the top teams in the MIAA. He also walked three times and had 11 total bases for a .917 slugging percentage. Ellis, a three-year letterwinner, has played in 80 career games with 72 starts and has a .333 career batting average with 12 doubles, four home runs and 43 RBI.

The Mustangs will be in action March 6 versus Missouri-St. Louis in a doubleheader on their spring trip. On March 7, SMSU battles North Alabama before heading to Kissimmee, Fla., to play 12 games in the Rebel Spring Games.

Congratulation to Max and Mary Lord who provided the correct response to last week’s Mustang Hoofprint’s Trivia Question: At last year’s Gold Rush Raffle, who won the grand prize of $5,000?

Who is the career leader in field goal percentage for the Mustang men’s basketball team?

LITCHFIELD — The Marshall boys hockey team fell to Litchfield/Dassel-Cokato 2-1 on Saturday. After a scoreless ... 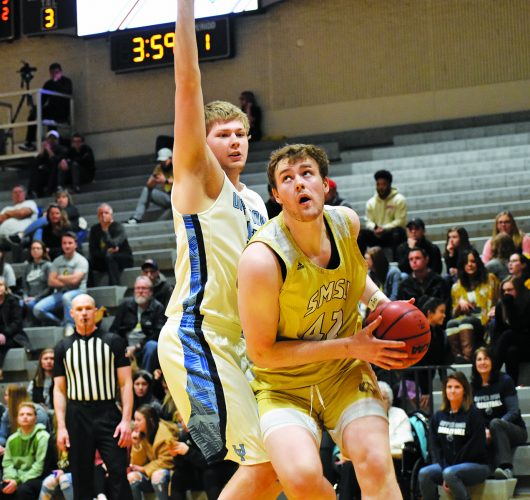 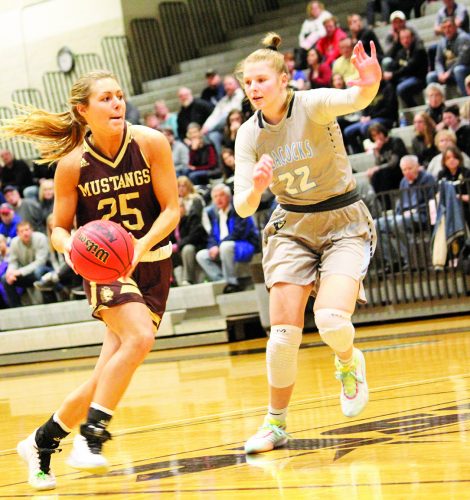 Who cares about a budget? I do Mr. President