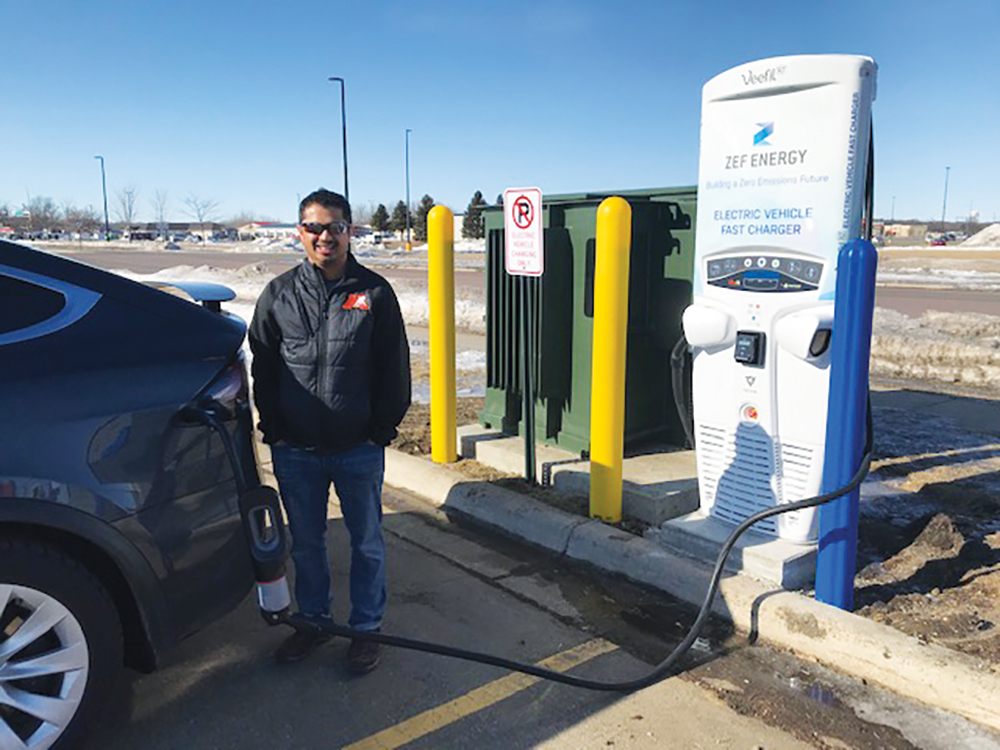 Marshall resident Amod Damle owns an electric vehicle, and was one of the first people to try out the new fast charger.

MARSHALL — People looking for a place to plug in their electric cars now have a new option in Marshall. An electric vehicle (EV) charging hub installed in one of Marshall’s major shopping areas is now operational and ready to use, Marshall Municipal Utilities announced this week.

The EV charging hub, located in the parking lot outside Tall Grass Liquor in Marshall, has a 50 kilowatt fast charger and two 11.5 kilowatt Level 2 chargers for drivers of electric vehicles. Marshall’s hub is the first of 22 charging stations being placed around Minnesota through grant funding from the Minnesota Pollution Control Agency. A charging station in St. Cloud is also expected to go into service this month, MMU said.

“These chargers are going to allow more people to have electric vehicles,” and help travelers driving through the area, said Marshall resident Amod Damle. Damle drives an electric vehicle, and became one of the first local residents to check out the new charging stations.

“The Volkswagen (diesel emissions) settlement was the impetus for all this,” said MMU General Manager Brad Roos.

According to the Minnesota Pollution Control Agency, the state of Minnesota will receive a total of $47 million from the national settlement between 2018 and 2028. The MPCA said it would spend 15% of the funding it received on infrastructure for electric vehicles, like charging stations.

“He knew I had an electric vehicle,” and mentioned the new charging hub, Damle said.

While he has a charger for his vehicle at home, Damle said making long-distance trips in an EV means learning where there are charging stations available, and planning your route accordingly so you don’t run out of battery power.

There has been an EV charging station at the Sleep Inn in Marshall since 2018, Damle said, and he knew some travelers have stayed at the hotel because they could charge their vehicles there. Having the charging station at Tall Grass Liquor will also benefit people driving into Marshall, he said.

Damle said he added the location of the new EV charging hub to PlugShare, an online interactive map of EV charging stations across the U.S.

Roos said interest in electric vehicles is starting to grow, both locally and nationally. Electric utilities are paying attention to the trend.

“The electric industry views the electric vehicle market as an area where we might see increases in electrical sales,” Roos said. On a local level, MMU started its own incentive program for homeowners who install EV chargers for their vehicles.

The “$64,000 Question,” Roos said, is how fast support for electric vehicles will grow.

“Nobody really knows how many of these (vehicles) are going to be on the road five years from now,” Roos said, but auto makers are starting to offer more models of electric cars and trucks. For example, he said, Ford has announced plans to release an electric version of the Mustang, and electric and hybrid versions of the F-150 pickup truck.