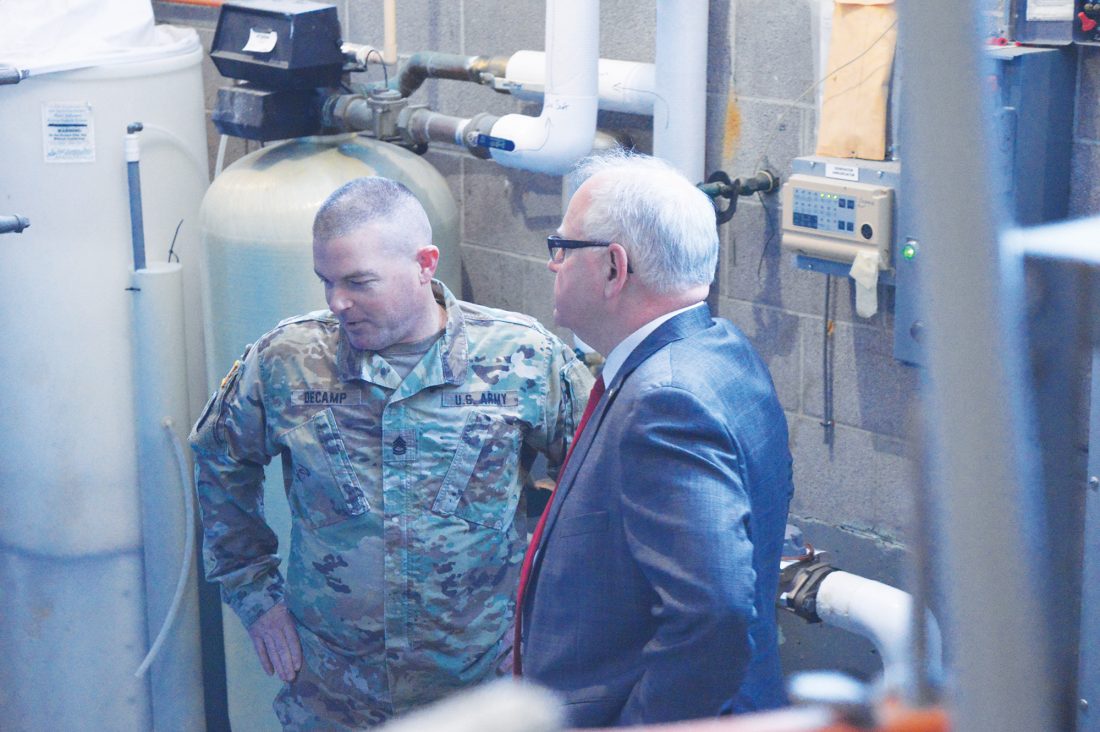 Photos by Karin Elton Sgt. 1st Class Nicholas DeCamp shows Gov. Tim Walz the boiler room, one of the many areas that need updating at the Marshall National Guard Armory. Below, Walz looks over the menu at Mariachi Fiesta restaurant on Main Street Tuesday. He was in Marshall, on the one-year anniversary of his governorship, visiting the armory and a conference to address the teacher shortage in Minnesota at Southwest Minnesota State University.

MARSHALL — We might drive by it every day and not really see it. It’s just there and has been for decades. We might have been inside it for a community event or have never been inside. But the National Guard Armory on Timmerman Drive in Marshall is a vital part of the Marshall area community. The Armory has provided a space for guardmembers for many years and now needs the community’s support.

After getting a firsthand look at the armory’s lack of space and efficiency, Walz said he will include it in his 2020 bonding bill.

The Guard has requested $3.25 in state funds for renovations. The federal government is expected to contribute up to half of the cost for a possible total of $6.5 million.

Walz commented that the building’s life expectancy has been stretched by about 20 years.

The armory is used for community events.

“The building is rented out for use on average five, six days a month,” said Sgt. 1st Class Nicholas DeCamp, in addition to regular monthly rentals. “Some months are busier than others.”

The supply room where “sensitive items” are stored is “pretty cramped,” he said.

The lockers with the members’ personal gear are out in the open on the main area “which is not ideal,” DeCamp said. “It would be better if they were in another area locked up.”

Inside the meeting room, Sukut commented that for training meetings, the room is “jam packed. The building is not efficient. Something might take a whole day instead of two, three hours.”

Walz walked down some steps to where the heating system was located.

“We haven’t had any problems with the boiler — knock on wood,” said DeCamp.

In some rooms, the temperature can get to 85 degrees.

The men’s locker room has turned into the table and chair storage room over the years.

Walz, who served in the Army National Guard for 24 years and rose to the rank of Command Sergeant Major, is familiar with military infrastructure needs.

“I’ve been in your position,” Walz said. “I know what it takes to staff an armory, having done it myself. These facilities are directly related to national security and state disaster readiness, so we’re grateful for that and we’ll make the case for you.”

Walz said the good news is that “young people are still signing up for the National Guard.” He noted that 15 percent of the country is classified as rural but 50 percent of warriors come from rural communities. “They serve a purpose across the state — in blizzards, flooding, whatever. This building becomes really active.”

Walz said it doesn’t make sense to let infrastructure deteriorate and kick the can down the road because it will just cost more later and with federal matching dollars available, it’s not responsible to leave money on the table.

Marshall Mayor Bob Byrnes was on hand to take the tour with Walz. Walz asked Byrnes if he was behind the request for armory renovation funds and Byrnes replied in the affirmative.

Walz said it’s better if bonding requests have the support of the community.

“It’s really an asset if you have the city behind this,” he said.

The Marshall Armory is one of several armories across the state asking for renovation funds.