Shopping for school supplies with the sheriff 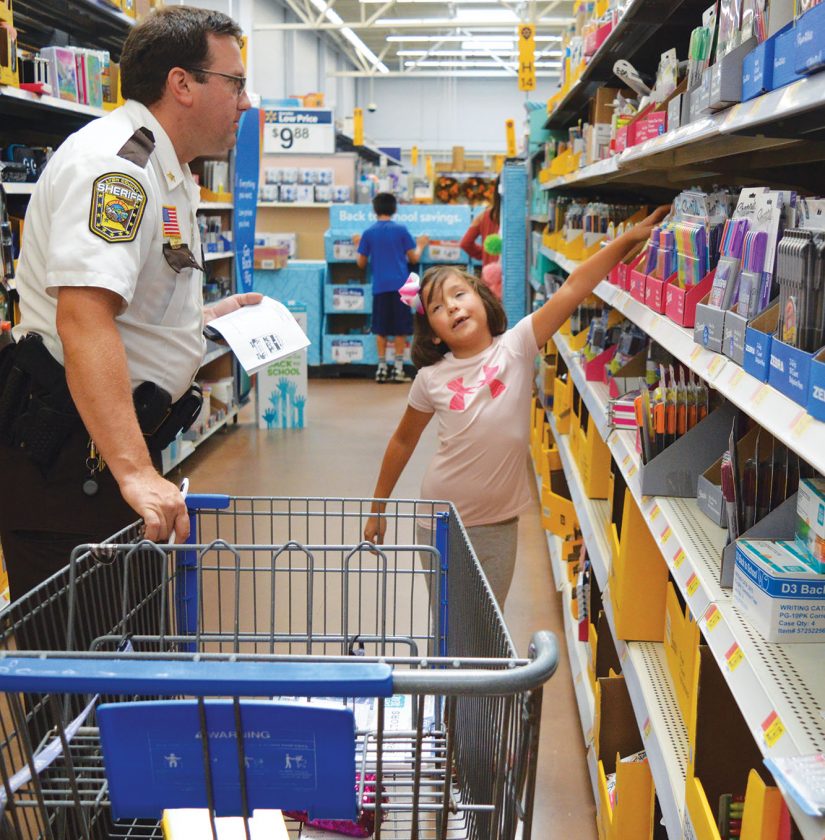 Photo by Deb Gau Lyon County Sheriff Eric Wallen checked off items on a school supplies list, while 6-year-old Jezzy picked them out and put them in the shopping cart. Three officers from the Lyon County Sheriff’s Department were at the Walmart in Marshall on Friday, helping local children in foster care do their back-to-school shopping.

MARSHALL — Seeing their uniforms might have caught customers’ attention in the store. But there wasn’t any emergency — officers from the Lyon County Sheriff’s Department were at the Marshall Walmart on a different kind of mission.

“At first I was nervous,” Cienna said of shopping with an officer. But, she said, “It was fun.”

The shopping trip was made possible through the Minnesota Sheriffs Association and MN Adopt, an organization that helps support adoptive and foster families in Minnesota. Wallen said MN Adopt raised $11,000 to help hold back-to-school shopping trips for 58 foster children in 27 counties. Each child would receive $200 for supplies and new school clothes, he said.

“It’s a big deal to have nice school supplies,” Wallen said, but children in foster care don’t always get the chance to have those supplies. When the Sheriffs Association reached out to the Lyon County department about taking part in the back-to-school event, he thought it would be a positive thing.

Wallen, Louwagie and Sandgren went back and forth through the school supplies aisles on Friday, while their young partners picked out items like pencil cases and binders.

The shopping trip’s high points were different for the three siblings. Jezzy liked picking out school clothes the best, while Anthony was most excited about getting a mouthguard and gloves so he can play football. It will be his first year playing, he said.

“But he’s been practicing a lot,” Shawn Jones said.

The school shopping trip was a good experience for the officers too.

“It was fun to be able to participate,” Sandgren said.

“I’m glad Sheriff Wallen asked us to do this,” Louwagie said.

He said it was also good to see the support community members had for the event, when they saw what was going on. One shopper at Walmart gave the officers a $10 bill to chip in for school supplies, he said.

Minneapolis leaders push ahead with efforts to change police