Mustangs on the move

New students, parents get lots of help on move-in day 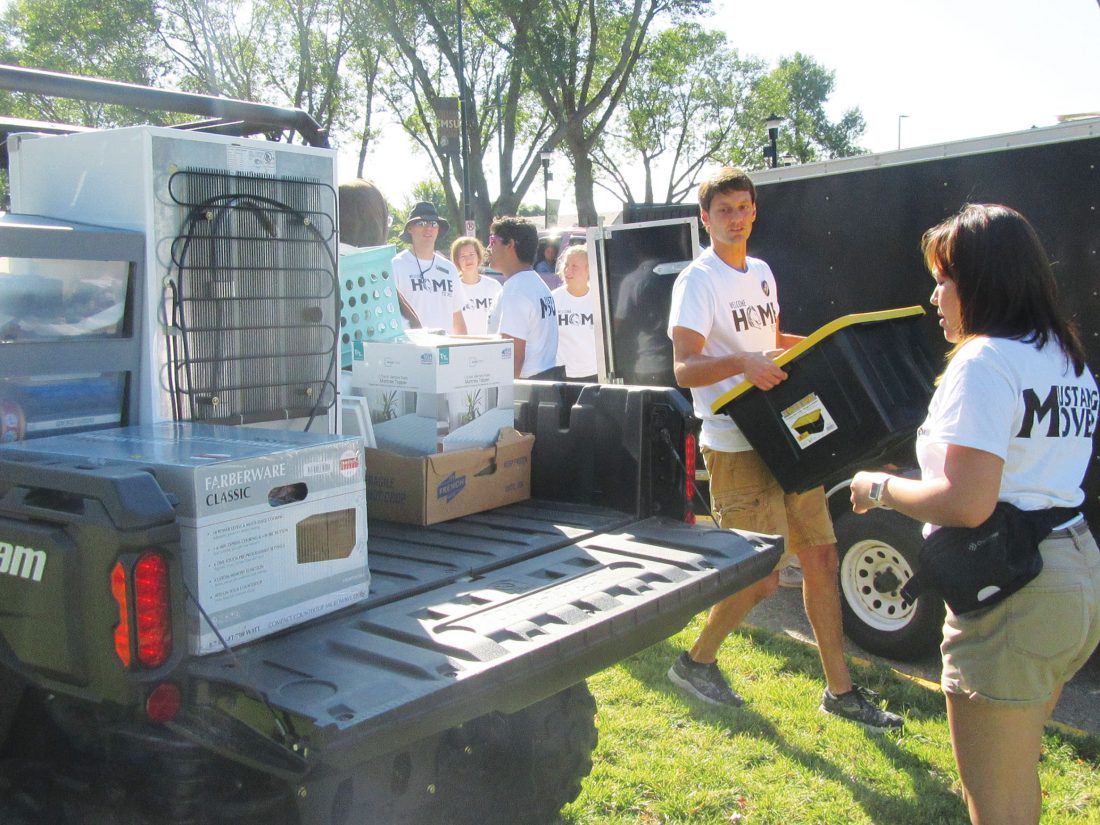 MARSHALL — It sure beats moving your kid in all by yourself.

“Not to put down (School of) Mines, but it took us three hours and we walked several blocks when we moved in her older brother,” said Gerald Volk of Watertown, S.D. He was assisting his daughter, Cheyenne Volk, with the move-in process Thursday morning at Southwest Minnesota State University.

They had parked on Birch Street and were immediately set upon by a “glob of guys,” Gerald Volk said.

The glob took all of her stuff and said they would meet the two at Sweetland Hall. Before going to Sweetland, the two went to the Residential Life check-in tent to get room keys and information.

The Volks were among the many freshmen and transfer students who took advantage of Move-In Day Thursday at SMSU, part of Mustang Gold Rush Days which run through Sunday. Classes start Monday.

Cheyenne Volk, who is a music education major, said she hasn’t met her roommate yet, but “we talked online.”

Mustang Movers — students, faculty, staff, alumni and community members — helped the new students move into their new homes, continuing a tradition started by the late President Doug Sweetland. A big help was the two side-by-side utility vehicles donated for the day by Action Sports of Marshall.

“They’ve donated for a number of years,” said Admission Director Matt Suby. “They are a big help with larger loads. The orientation leaders drive them. They go up and down the street.”

Suby said the help by Mustang Movers takes a lot of stress off families.

“You can pull your car up and all of your stuff is moved at once with eight or nine people helping,” he said. “It’s a great event for not only the students but the community.”

The blue skies and mild temperatures were a plus too for which he took credit.

“We try to order that a year in advance so we did pretty good there,” he said.

Mustang Mover Brock Fox, an agriculture education major in his junior year, said the “weather is perfect. It rained yesterday (Wednesday) so I was worried about it raining today.”

Fox was kept hopping as the new students pulled in.

“I’m helping until lunchtime and then it quiets down — we’ve moved in quite a few students,” he said.

Transfer student Jonathan “JJ” Strumbel from Rockford carried his own flat screen TV alongside some Mustang Movers who helped with his other necessities. His dad, Rod Strumbel, said JJ attended St. Scholastica in Duluth for one year and moving in there took a lot longer.

“When I saw the 20 minute parking sign I thought ’20 minutes? How are we going to do this?’ “ he said. Strumbel said his son, an exercise science major, “fell in love” with SMSU on an earlier campus tour.

SMSU President Kumara Jayasuriya wore a white Mustang Mover T-shirt as he walked the area Thursday morning. He said in the previous universities he has served they didn’t have an operation where the newcomers get help moving in.

“This is the first time I’ve experienced something like this,” Jayasuriya said. “I’m enjoying it a lot. It’s great to see the level of energy and sense of community.”

Schwan’s ice cream treats were handed out Thursday and a US Bank Campus Cookout took place over the noon hour in front of the Conference Center. The Campus Religious Center was the site of an ice cream social in the afternoon, followed by house meetings and dinner with orientation leaders and resident assistants. After dinner, students played laser tag in the Lower Conference Center or watched the Mustang volleyball team play an exhibition game. A pool party ended the evening.