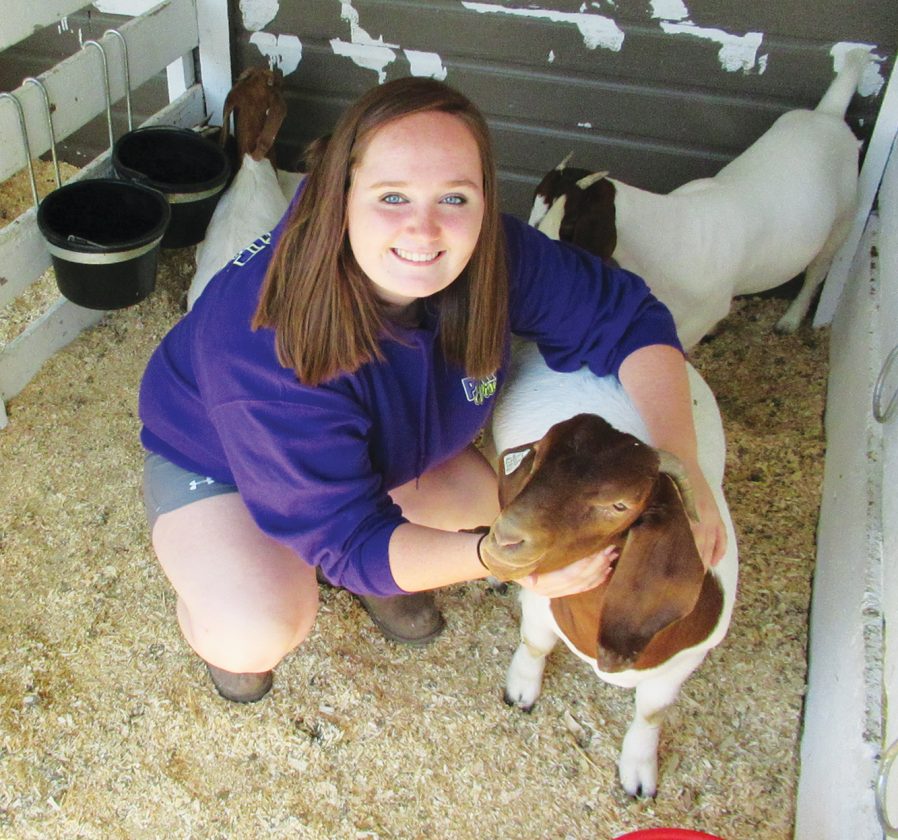 MARSHALL — The livestock barns at the back of the Lyon County Fairgrounds this week at the 2019 Lyon County Fair include at least two types of 4-H entries which are on the cutting edge of 21st century farm production.

Three members of the Shawn Lozinski family from the Minneota area showed together in the livestock ring with Junior Yearling Breeding Heifer entries.

All of them are miniature Hereford cattle, and all three helped their owners to win blue ribbons. Blues were given out to sisters Mya and Jaylynn Lozinski and their brother Browdy. They all belong to the Westerheim Flashing Stars 4-H Club in Westerheim Township east of Minneota.

Meanwhile Samantha Philips, a Marshall High School graduate, Lake Marshall Eagles 4-H member, and a veterinary science student at the University of Wisconsin-River Falls, was looking forward to county fair 4-H goat shows. Her entries are from the same breed as what’s being used in her family’s goat breeding and finishing operation near Marshall.

“Our miniature Herefords were once the actual size of the breed,” Mya Lozinski said. “That changed when they were upsized for bigger cattle and more meat production. Now the miniatures have been making a comeback.”

Twenty calves are born each year. They’re used for either breeding stock, show competition, or meat processing — depending on where they best contribute to profit margins.

Swede Prairie Miniatures represent a return to cattle production for the Lozinski family after a 35-year hiatus. Shawn’s father, Edward, previously had a family-sized dairy operation.

“It got to the point where it made sense for me to bring cattle back to our farm,” Shawn said. “I’d thought for a long time that I’d like to raise my own meat. It’s practical in today’s market and I enjoy it.”

The miniature Herefords are also a good counterpart to Lozinski’s participation in the Century Farm Organics partnership headquartered in Clarkfield.

It includes 2,000 acres of certified organic crops, the equivalent of three township sections (3 square miles). A first phase of the partnership’s startup centered around black beans, many of which became part of the Bush Beans canned product line. Some of the rest of the crop was bought by the Chipotle Mexican Grill restaurant chain.

Further phases have led to expanded use of organic feed for livestock operations. As a result, the livestock becomes suitable for markets that demand meat raised with organic chemical-free and non-GMO (genetically modified organism) standards.

“Major buyers want our commodities,” Shawn said. That’s created demand for us, and it’s given us more profit potential.”

The same kind of emerging market opportunity spurs the Philips family goat production. Samantha said they maintain a breeding herd of 100 female goats, and send other finished goats to sale barns located in Pipestone and Jackson.

From there, they’re sold for processing to packers. Eventually the processed meat reaches retail destinations that meet the growing demand for goat meat, which is especially strong among Hispanic and Somali population groups.

“The ethnic markets have opened up many good opportunities,” Samantha said. “It’s considered a delicacy by people from Somalia. They choose it as their number one meat product.”

She said Minnesota is one of the newly emerging states for goat producers. More established markets are located in states to the south, especially Texas and Oklahoma. Feed for the Philips goats comes from the Lowes Pellet and Grain Company, southeastern Indiana’s largest independently owned feed and grain supplier.

The Philips goats are fed with Lowes feed in winter months, and then turned out on pastures in the summer to feed on pasture grass.

“Goats are a growing industry with a bright future,” Samantha said. “It’s like other kind of red meat, with a little more of a gamy flavor. It’s pretty tasty.”