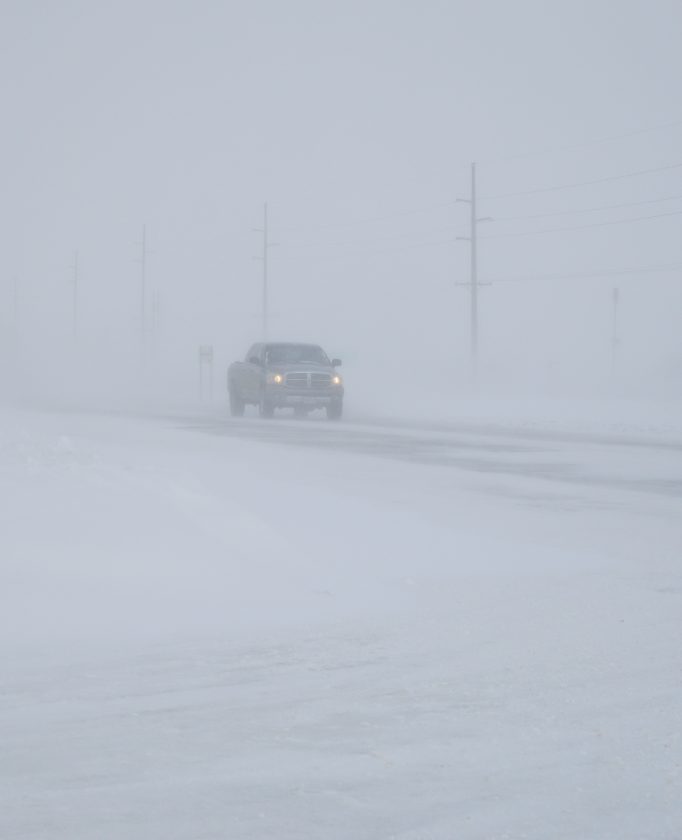 Photo by Deb Gau Wind-blown snow made for low visibility along Highway 23 in Marshall on Wednesday. The Minnesota Department of Transportation urged motorists to turn their headlights on manually to make sure their vehicles could be seen by snowplow drivers.

MARSHALL — The Marshall area has seen the gamut of winter weather hazards over the past couple of weeks — first extreme cold, then slippery roads, and now whiteout conditions on Thursday.

MnDOT said it was continuing to run snowplows, and highways in the region were not closed. However, drivers were advised to stay put until conditions improved.

On top of the snowy and cold conditions, more than 50 Marshall residents were facing a natural gas outage on Thursday. Great Plains Natural Gas said a third party hit a natural gas line in Marshall, which caused an outage to customers along Carrow Street, Carrow Circle, Horizon Drive, Horizon Circle, Sunset Circle and Morningside Circle. As of 3:30 p.m., gas crews were continuing to make repairs to the line, Great Plains Natural Gas said.

A total of 56 customers were affected by the gas outage. Great Plains Natural Gas said once repairs to the gas line were complete, all meters in the area would have to be turned off before the system was pressurized. After that, service technicians would go door-to-door to relight gas appliances.

Area schools, and many Marshall businesses, were closed down Thursday. A blizzard warning was in effect for all of southwestern Minnesota. Additionally, the National Weather Service issued a wind chill warning that will last until noon today. Wind chills as low as 40 degrees below zero are expected, the NWS said.

While snowplows were at work in and around Marshall on Thursday, drifting snow was still a problem.

“The wind does affect (snowplow) operations, especially on the perimeter of the city,” said Marshall Public Works Director Glenn Olson. Open areas tended to fill back in with snow. Olson said plow crews would have to come back later to clear out problem areas.

City staff were also down one snowblower on Thursday, due to a bearing that went out. Olson said it wouldn’t prevent city crews from working, but “it takes more time.”

Another factor that takes extra time for snow removal is the sheer amount of snow around Marshall. Olson said the snow was deep enough that city crews were hauling it out of areas where large piles built up, like cul-de-sacs and around intersections.