Law enforcement officers, others train to de-escalate a crisis when responding to emergency calls 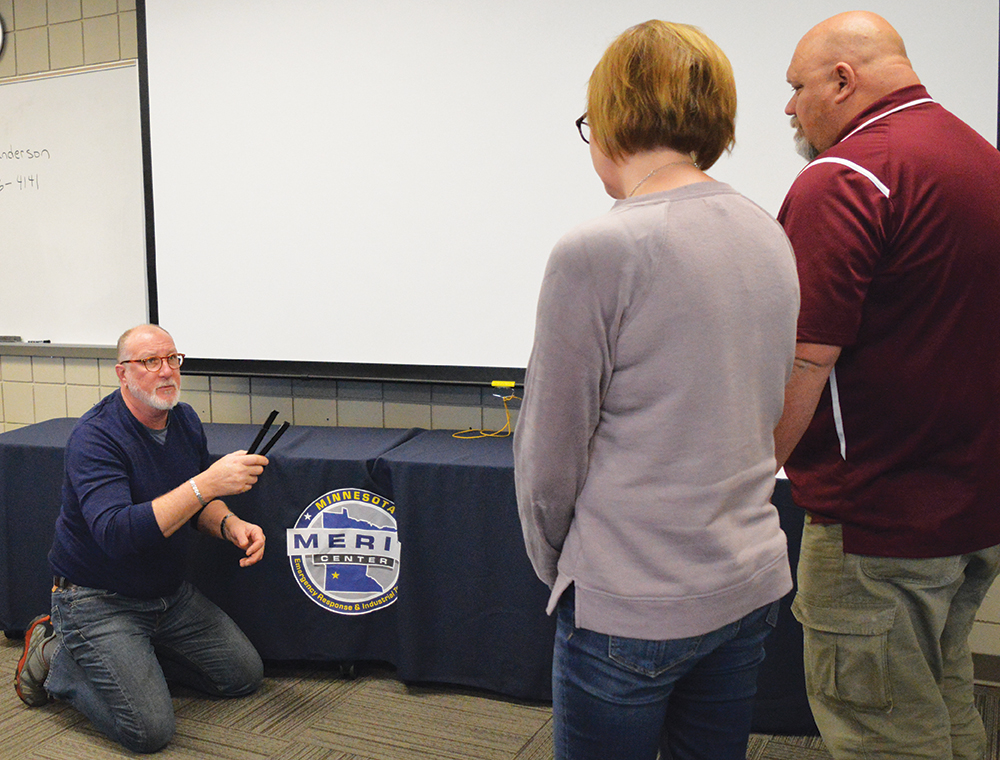 MARSHALL — In the past 10 days, 90 law enforcement officers and other individuals from Lyon, Lincoln and Murray counties completed mental health de-escalation training at the Minnesota Emergency Response and Industrial Training (MERIT) Center in Marshall. The final group finished their two-day training on Tuesday.

For some, the training provided by Pro-Crisis, fulfills a new state mandate. Hopefully for all, it has a huge impact on the way they approach and deal with mental health — both with others and perhaps even with themselves.

“Part of it is really having the cops understand that it’s a medical illness,” Pro-Crisis founder Patti Hecht-Kressly said. “This is not a choice. This is not them doing it because they want to do it. It’s a hard illness to have. So to help them understand it, then they can learn to handle it differently and have a different outlook on it. It’s really frustrating dealing with somebody who has mental health issues on the street. So we teach them to slow it down and really look at what’s going on in the situation and be empathetic to them.”

Law enforcement officers and social workers are oftentimes the first to respond to mental health calls, so it makes sense to give them good tools to work with. Over the course of the three, two-day training sessions — roughly 30 participants were in each — there was both classroom time and role playing scenarios that took place.

“Each of the came to training for two days,” event organizer Eve DeBaere said. “What I think is really awesome about the program is that they have professional actors who come in and portray people with mental illness. They watch YouTube and research it. They learn the different diagnoses like schizophrenia, bipolar, depression, being suicidal and those types of things and the law enforcement and other participants have to de-escalate the situation.”

DeBaere, a Minnesota Department of Corrections probation agent for the Marshall District, said the interaction is required to be hands-off.

“It’s complete verbal de-escalation,” she said. “They talk about the tone of voice, body movements and all those types of things. It’s really intense.”

Split into three groups on Tuesday, participants learned how the role playing would work.

“The only ground rule we have is that you don’t touch the actors,” coach Mark Craig said. “We’re going to do a start-stop scenario for 15 minutes. You’re out on the street and coming into different situations. Your objectives are to use listening skills, set boundaries, do problem-solving and be safe.”

Luke Isder and Sarah Griesse were the first to volunteer in one of the three classrooms. They learned that a call had come in regarding a man acting bizarre for several hours at the local library. Upon starting the scenario, actor Jefferson Slinkard, portraying Jim Franklin, rapidly rambled on about the Russian government and Russian trolls and how they’ve been attacking people through Facebook.

“I’ve been doing some research on this whole things about Facebook and the Russian trolls and these algorithms and let’s you only talk to certain people,” Slinkard said. “It’s all interconnected with the Russian government and the Russian trolls that are working for them and the advertisers who make money off all this stuff and how they target you with that.”

Isder and Griesse calmly try to gather information from the man.

“We were called here because people said you were acting a little erratic,” Griesse said. “Do you have any mental health issues we should know about?”

During a timeout, their peers added feedback and there was discussion about whether or not there was a threat to their safety or that of the public. Craig said he personally didn’t see a threat yet, but that people should always go by their gut feeling. He added that it was important to ground the man, perhaps say his name often, to get him to stop speaking rapidly

“I think he’s just being a nuisance,” Griesse said.

Isder said he contemplated leaving him there but ask him not to talk to other people. But since it is a public place and patrons had left the library because they felt uncomfortable around the bizarre-acting man, the role players were tasked with getting him to leave.

“I’d like to help you get to where you need to be,” Isder said. “Did you drive here?”

After successfully completing the scenario, Craig complimented the volunteers, noting that force isn’t necessarily the best action even though it may initially seem like the quicker response.

“When you’re by yourself, the best defense is talking,” he said. “It’s another tool in your belt. As I’ve got older and wiser, I realized it took less time to talk to the guy as opposed to writing up reports and booking him and so on.”

In another scenario, Jill Pieske and Tom Whitehead approach the man acting bizarre in the library, only this time, he is looking for a transponder or the source of the buzzing he hears.

In another room, Ben Rieke and Danielle Brandt engage in conversation with a very manic woman portrayed by actor Heidi Fellner. Eventually, they were able to convince her to go with them to seek help.

Jarrod Larson took on the challenge next. Fellner’s character spoke rapidly as she talked about spiraling out of control and later, hinted about suicidal thoughts.

“Would you be willing to go with me and see someone about all the thoughts you’ve been having lately,” Larson said.

Fellner responded that it wouldn’t change what is happening in the world. Larson said it might. After showing disapproval about riding in the squad car, Larson suggested that she could ride in an ambulance. Afterward, coach Mark Sawyer said it was good that he gave her alternatives, but that he didn’t promise that she could sit in the front like she has asked about.

“You avoided that pitfall,” Sawyer said.

Nate Holden was the next to role play, and in coming to do a welfare check, found a woman who had lost custody of her children, was somewhat belligerent and was seemingly unwilling to go on with her messed up life. While Holden wasn’t able to convince the woman to go with him, he managed to get her to agree to have her sister come over.

“Together, we can talk about getting you the help you need,” Holden said.

Whitehead, a sergeant with the Slayton Police Department, said he thought the training was really good.

“The scenarios are spot-on,” he said. “I think it’s something we all need a refresher on when we’re dealing with different people. It’s good to learn how to interact better with everyone.”

DeBaere was instrumental in bringing the training to Marshall.

“The Department of Corrections as far as probation was trained throughout the state by Pro-Crisis,” she said. “We were asked to come back to our communities and try to work on the mental health issue because it’s a huge issue. As a probation agent, I supervise felony probationers and a lot of them have mental health issues. So I’m kind of passionate in that regard.”

“A state mandate for law enforcement came out as of July 1, 2018, so that kind of kick-started this,” DeBaere said. “But I didn’t just want it to be law enforcement because it’s a bigger issue than that.”

Hecht-Kressly spent 13 years in law enforcement before going back to get her master’s degree in counseling/psychology.

“I was the first female officer in South St. Paul,” she said. “My goal was to do therapy with law enforcement. When I was going through school and started my career, I started working with people with severe, persistent mental illness. They were folks that had schizophrenia or bipolar who were actively psychotic and I found a great appreciation for their struggles and trials they went through.”

After doing that for awhile, Hecht-Kressly left law enforcement and started doing crisis intervention team (CIT) training, first with the Minneapolis Police Department and the Minnesota CIT Officer’s Association, before creating her own company.

“We’ve trained over 600 correctional officers,” she said. “We work in Minnesota and Wisconsin. Starting July 1, all full-time and part-time police officers have to have the 16-hour training. There are mandates and learning objectives you have to follow. The mental health stuff fit perfectly with what I’ve been doing for a long time, so it was just adding in the cultural diversity, conflict mediation and complicit bias, which was the focus for these guys (Monday).”

Along with 35 different actors who are contracted, Hecht-Kressly said she has a course coordinator (Sawyer), role play coordinator (Nick Duffy) and a group of coaches.

“Everyone is highly trained and most of them have a personal investment in it,” Hecht-Kressly said. “Many have family with mental health issues or something of that sort. They’re using their craft to help make an impact. It’s a good business. It helps everybody — especially law enforcement and people who have been diagnosed with mental health issues.”

In an inadvertent way, one of the lives the participants end up saving might be their own.

“There have been so many suicides lately in law enforcement, so we do a lot about self care and talking about PTSD (post-traumatic stress disorder) — getting help, finding a therapist and de-stigmatizing it for law enforcement because they have a lot of trauma,” Hecht-Kressly said. “With me coming in as a cop and talking about it, it gets the conversation, the dialog, going. It’s not that we’re crazy. We do a hard job. We’re normal people doing abnormal jobs.”

According to a 2018 study by the Ruderman Family Foundation, more than triple the number of police officers died by suicide than were fatally shot in the line of duty.

“The numbers are ridiculously up,” Hecht-Kressly said. “It happens too much.”

DeBaere hopes that another training session can take place in the spring. She’s also optimistic about getting a committee going to address mental health issues, including the lack of resources in the area.

“On the first day of each session, we had a working lunch and brainstormed the issues,” she said. “What are the problems? Where are the gaps? Do we have to change policies, procedures, protocols, communication? It’s a big issue, but I’m looking for solutions.”