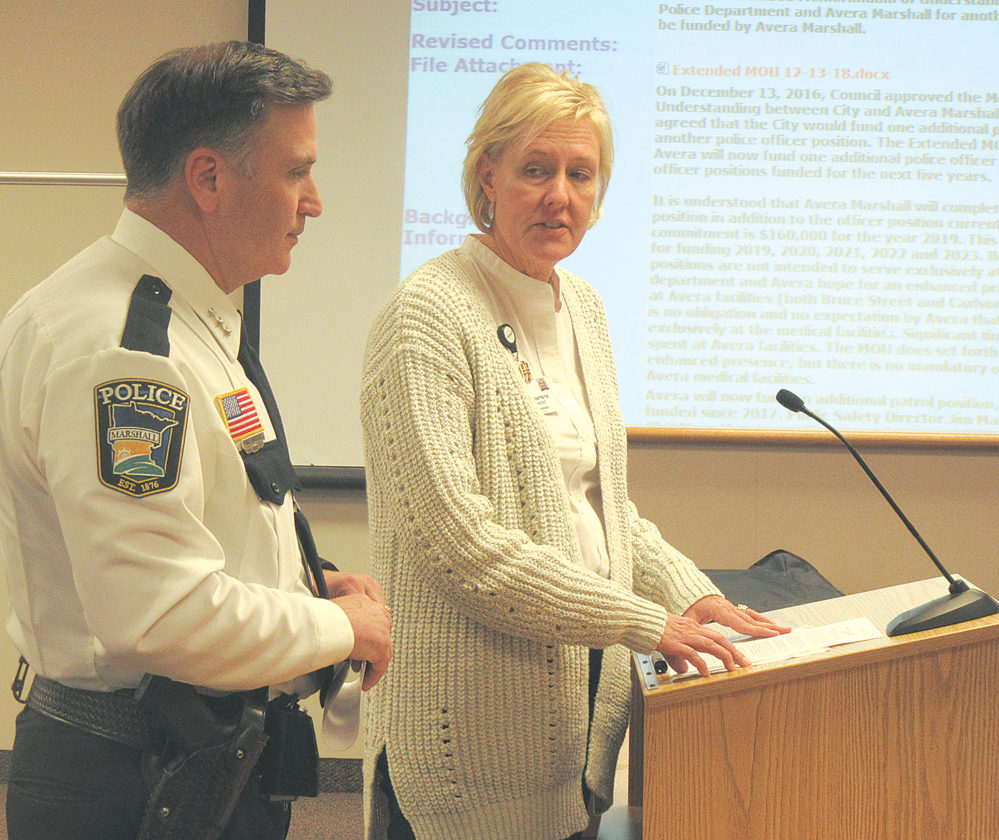 MARSHALL — The relationship between the Marshall Police Department and Avera Marshall Medical Center has been good for public safety at the hospital, local officials said — so much so that Avera Marshall is willing to lend more support for the city to hire another patrol officer.

“I really believe it goes far beyond (Avera Marshall and the MPD), in that it truly increases the service and the coverage that we can provide to the community,” Marshall said.

Under the proposal, Avera Marshall would provide funds to pay two full-time police officer positions for the next five years. The 2019 funding commitment would come to $160,000.

Two years ago, the city approved a memorandum of understanding with Avera Marshall, in which Avera Marshall would contribute $80,000 a year for the city to hire one full-time police officer.

Marshall said he felt the MOU “was a clear example of one of our businesses showing support” for the MPD. “That initial step by Avera, I think has helped strengthen our working relationship and our partnership, and has allowed the police department to provide better coverage for the entire city of Marshall.”

At the time, Maertens and then-public safety director Rob Yant said the partnership would allow the MPD more leeway for patrols or police response. The understanding was that the additional officer wouldn’t just be focused on the hospital.

Marshall and Maertens said that still held true for the expansion proposal. However, the new MOU would include language calling for some enhanced patrol presence at the Avera Marshall campus.

“We believe we can continue to strengthen that relationship through additional resources,” Maertens said.

The expanded MOU calls for additional parking lot patrols around shift changes, as well as the formation of a working group to talk about security and emergency planning for the MPD and the hospital.

Back in 2016, Yant said the MPD was facing challenges responding to changing safety needs in Marshall. For example, police were receiving more time-consuming calls for help dealing with mental health or drug concerns.

Maertens and Marshall said that concern is still present today. Maertens said more counties outside Lyon County are bringing patients to Avera Marshall’s emergency departments, and along with that there are sometimes increased public safety needs. Patients waiting for mental health placement, for example, may be waiting for an extended time period.

“Mental health has become a talking platform for a lot of different people, and that is where we really see where this is going to be beneficial,” Marshall said.

Responsive leadership including you